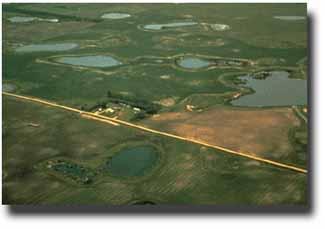 The prairie potholes of Canada, Minnesota and North and South Dakota were formed by glaciers scraping over the landscape during the Pleistocene.

Prairie potholes are depressional wetlands (primarily freshwater marshes) found most often in the Upper Midwest, especially North Dakota, South Dakota, Wisconsin, and Minnesota. This formerly glaciated landscape is pockmarked with an immense number of potholes, which fill with snowmelt and rain in the spring. Some prairie pothole marshes are temporary, while others may be essentially permanent. Here a pattern of rough concentric circles develops. Submerged and floating aquatic plants take over the deeper water in the middle of the pothole while bulrushes and cattails grow closer to shore. Wet, sedgy marshes lie next to the upland. 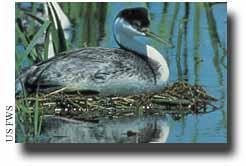 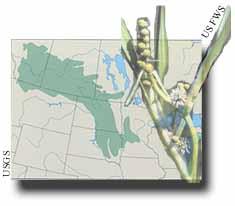 The Upper Midwest, because of its numerous shallow lakes and marshes, rich soils, and warm summers, is described as being one of the most important wetland regions in the world. The area is home to more than 50 percent of North American migratory waterfowl, with many species dependent on the potholes for breeding and feeding. In addition to supporting waterfowl hunting and birding, prairie potholes also absorb surges of rain, snow melt, and floodwaters thereby reducing the risk and severity of downstream flooding. 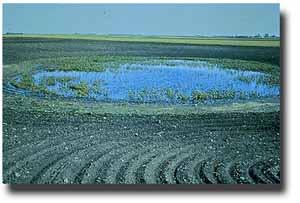 More than half of all prairie potholes have been drained or altered for agricultural use.

Many of these important and highly productive communities have been altered or destroyed due to increased agricultural and commercial development. As a result, only an estimated 40 to 50 percent of the region's original prairie pothole wetlands remain undrained today. The U.S. Fish and Wildlife Service has done a report on the Status and Trends of Prairie Wetlands in the United States 1997-2009  Exitthat describes more recent changes to prairie pothole wetlands.