The Oregon Department of Environmental Quality (DEQ) has developed an ecoregion- based biological monitoring program that includes macroinvertebrate and community fish assessments. Periphyton growth studies have also been used in some TMDL assessments. Bioassessment uses numerous metrics, each of which is scored according to their percent of variation from the reference condition; the metric scores are then summed to provide an overall site assessment. Multivariate analysis is also being used to assess biological communities. The protocols for this program are based on EPA's Rapid Bioassessment Protocols, with refinements based on Oregon's streams. They represent an integrated monitoring approach that evaluates stream habitat, physiochemical parameters, and biota.

In 1991, Oregon adopted narrative biocriteria for use in water resource management and water quality standards. The objectives of the program are to evaluate monitoring techniques and develop state-wide guidelines, determine the sensitivity and effectiveness of monitoring techniques for various non-point source problems (e.g., logging, agriculture), and collect reference site data to develop and refine biocriteria. In addition, site-specific assessments have been conducted and applied primarily toward point sources.

Weyerhaeuser Paper Company operates a kraft pulp mill on the McKenzie River near Springfield. Major water uses of the McKenzie River downstream of the mill include irrigation, potable water supply, recreational and industrial use, and propagation of anadromous fish. Approximately 10% of the McKenzie River spring chinook salmon spawn below Springfield. Bioassessment data collected by Weyerhaeuser in 1991 indicated impairment of macro-invertebrate communities in the McKenzie River, especially in the mixing zone of the discharge. While there was no evidence to suggest that fish communities were also being affected, citizens had expressed concerns about possible impacts on the salmon fishery. When Weyerhaeuser's NPDES permit came up for renewal, the DEQ used the opportunity to require that four seasonal benthic biomonitoring studies be performed. The DEQ was able to impose this requirement because the narrative biocriteria were already in place.

The initial bioassessment data collected in 1991 indicated effects were localized primarily along the left bank of the river, in the effluent plume. Effects found within the effluent plume included lower diversity and an increased abundance of pollution-tolerant organisms relative to sensitive taxa (as indicated by higher values of a biological index, the Hilsenhoff Biotic Index, HBI). In response to these and other findings, Weyerhaeuser had a new submerged, multi-port diffuser installed in 1994 to replace the existing single-port shoreline outfall, with the objective of obtaining better dilution. 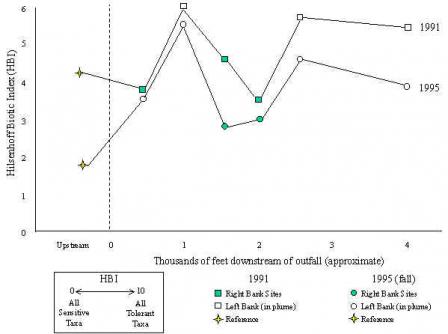 Pursuant to the NPDES permit requirement, Weyerhaeuser began the biomonitoring studies in the fall of 1995. Eight sites were evaluated: two upstream reference sites, four sites within the effluent plume, and two sites outside the plume. Four seasonal surveys were conducted (Fall 1995, Spring 1996, Fall 1996, and Spring 1997). The permittee reported evidence of an increased abundance of pollution-tolerant taxa during some seasons within the effluent plume compared to upstream control sites, indicative of slight impairment. Diversity was generally similar at all sites. These results indicated that the diffuser was working as intended because conditions on the left bank (within the plume) were similar to conditions on the right bank. Relative to 1991, improvement in the benthic measurement parameters was noted. Although the fish community was not directly assessed, the biosurvey results indicated that any effects of the discharge were minor and localized, suggesting that the more mobile fish populations would not be impacted.

The fact that Oregon had narrative biocriteria in place facilitated identification of a problem, provided a framework to require the permittee to investigate and address the problem, and allowed DEQ to respond effectively to citizens' concerns.