Bioassessment and biological criteria are valuable tools for assessing the general health of waterbodies, and can also be used in other applications, including enforcement investigations. In this case study, biological assessment was used to investigate the consequences of a pesticide spill on the fish and benthic macroinvertebrate communities of a suburban stream. Bioassessment confirmed the location of the spill, determined the extent of damage caused by the spill, and documented recovery of the stream community. 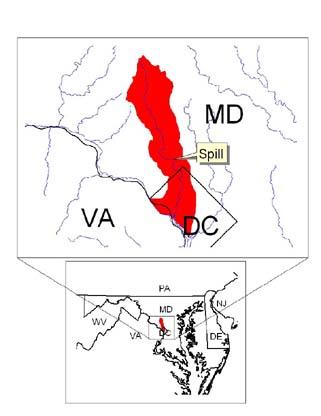 In the spring of 2000 a fish kill, estimated to be 150,000 fish, was observed along an eight mile stretch of Rock Creek, a tributary of the Potomac River in Maryland and the District of Columbia. Responding to the kill, the Maryland Department of the Environment (MDE) sampled the water column and sediments, and found high concentrations of the insecticides cypermethrin and bifenthrin. Both pesticides are highly toxic to fish. Concentrations were especially high in a storm drain entering the stream from the parking lot of a pest control company, suggesting that a pesticide spill had occurred.

The case was investigated by EPA's Criminal Investigation Division with assistance from the State of Maryland, Montgomery County, the National Park Service, and the District of Columbia. Within two weeks, a coordinated multi-agency effort sampled sediments, fish, and benthic macroinvertebrates upstream and downstream from the outfall. Fish sampling was repeated after five months, and sediments were retested nine months after the spill. Comparison of these post-spill samples, to samples taken before the spill, provided a quantitative assessment of the biological impact and evidence of stream recovery. In November 2001, the owner and an employee of the pest control firm were charged with federal law violations. A few weeks later, the owner pleaded guilty to the charges.

Cypermethrin is a synthetic pyrethroid insecticide used to control pests on crops and in buildings. Cypermethrin is not soluble in water and adsorbs onto sediments, plants, and aquatic organisms. It is highly toxic to most fish, concentrating on fish gills, and accumulating in fish tissue. Cypermethrin would be expected to persist in stream sediments for several months before degrading and disappearing. Bifenthrin, another pyrethroid like cypermethrin, is also relatively insoluble in water, adsorbs to sediments and aquatic organisms, and is toxic to fish and aquatic invertebrates.

Fish and benthic macroinvertebrates were collected from 11 stations - four above and seven below the outfall. Several sites had been sampled before the spill in routine monitoring programs by DC and Montgomery County. Historical data from 1996-98 was available for three stations below the outfall, and one site well below the spill had been sampled several times weeks before the spill. Samples were taken with standard methods recommended by EPA and adopted by the District of Columbia, Montgomery County, and the State of Maryland. Benthic organisms were collected by agitating the stream bottom into a kick net, and by taking sweeps with a D-frame net. Fish were sampled with a backpack electroshocker, identified, and returned to the stream after they had recovered from the electric shock. Fish community attributes were combined into an "Index of Biological Integrity," or IBI score. The IBI had previously been developed for Montgomery County.

Evidence of Impairment and Recovery

Samples were analyzed in three time frames (see Figure 2):
.before the spill occurred ("Before" samples)
.just after the fish kill was observed ("During" samples)
.some months afterwards, when a degree of recovery was expected ("Recovery" samples).

Samples were also categorized by location, being upstream or downstream from the outfall. Before and Upstream samples served as controls for the suspected effects of the spill.

There was no significant difference in Montgomery County Fish IBI scores among samples taken before the spill or upstream from the outfall (see Fig. 2), indicating that no other temporary stressors acted on the community outside the spill area.

Decrease in numbers of fish and the number of fish species, causing a reduction in the Fish IBI at all sites below the spill (see Figure 2). Approximately 7 fish species (of 16) were absent below the spill site, and four of 8 minnow species were temporarily extirpated.

Loss of caddisfly, stonefly, and mayfly species and individuals, and loss of midge species at all sites below the spill. On average, twenty macroinvertebrate taxa, of 46 taxa found upstream, were absent from downstream sites. 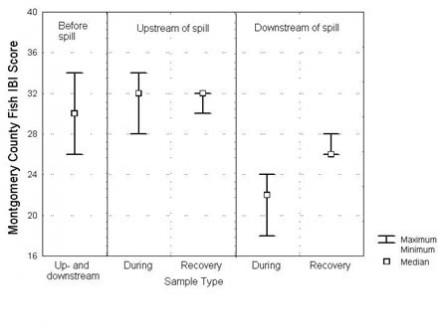 After 5 months, most minnow species had returned to the affected sites. Overall, the fish community had recovered to approximately 75% of upstream species composition.

The pest control company, its owner, and an employee were charged with violations of the Clean Water Act and the Federal Insecticide, Fungicide and Rodenticide Act. The employee allegedly spilled the pesticide PrevailT onto the parking lot while changing a pump on a truck. The label on PrevailT provides directions for confining spills using absorbents, and requires the proper disposal of waste. Instead, a garden hose was used to wash the toxic pesticide into a nearby storm drain. The owner of the company pleaded guilty to the charges.