The goal of this long-term program is to track whether the Clean Air Act Amendments (CAAA) (Plain English Guide to the Clean Air Act) have been effective in reducing the acidity of surface waters in New England, the Northern Adirondack Mountains, Appalachian Plateau, and the Central Appalachians and advance the science of air pollution impacts on water resources.

What are Acidified Surface Waters?

Acid precipitation (commonly known as acid rain) primarily affects sensitive bodies of water, which are located in watersheds whose soils have a limited ability to neutralize acidic compounds (called “buffering capacity”). Acidification is a result of acidic deposition and the soil’s capacity to buffer what is deposited. As water moves through and over the soil, it picks up the acid deposited and transfers it into lakes and streams. As lakes and streams become more acidic, the numbers and types of fish and other aquatic plants and animals that live in these waters decrease.

The LTM monitoring program tracks the status of acidified and acid-sensitive lakes and streams. This program measures critical chemical variables which provide insights into many measures of aquatic ecosystem health. The LTM program is used to better understand long-term trends in acidification and recovery in the Northeastern and Mid-Atlantic United States. The LTM program is operated with numerous collaborators in state agencies, academic institutions and other federal agencies.

The primary objective of the LTM program is to detect long-term trends in acid/base status of lakes and streams across a gradient of acidic deposition. LTM consists of a site network of lakes and streams that are particularly sensitive to acidity due in part to their underlying geology. Most site records date back to the mid-1980s or earlier. Sites are sampled 3 to 15 times per year with a higher proportion of sampling conducted in the spring to coincide with higher rates of runoff (e.g., snow melt) and higher stream flows because the aquatic effects of acidic deposition often exhibit seasonality (e.g., causing harm in the winter or spring when the more sensitive life stages of some fish species are present). LTM water chemistry data are used to characterize how the most sensitive aquatic systems in each region are responding to changing acid deposition, as well as providing information on seasonal chemistry and episodic acidification.

TIME was a companion project to LTM that was developed as a "special" study within EPA's Environmental Monitoring and Assessment Program (EMAP)-Surface Waters to track long term trends in the acid-relevant chemistry of specific classes of acid-sensitive lakes and streams. The TIME monitoring program consisted of probability surveys designed to answer questions like: “how many acidic lakes are there?" and "what is the trend in the number or proportion of lakes which are acidic?” These questions can be answered for specific types of lakes (e.g., seepage vs. drainage lakes) or for specific regions (e.g., Adirondacks vs. New England uplands). TIME was statistically based, thereby allowing regional population estimates of acid sensitivity status to be developed. TIME consisted of a synoptic survey of 74 acid-sensitive lakes in the Northeast and a separate synoptic survey of 58 acid-sensitive streams in the Mid-Atlantic. Waters were sampled annually in the late summer (lakes) and spring (streams) and the regional estimates they generated were specific to that time period. Sampling of this special study ended in 2015 for streams in the mid-Atlantic and 2016 for lakes in the Northeast with the realization of the program goals. The water quality and other environmental data are available on request.

Locations for the TIME and LTM Programs

The TIME and LTM programs tracked changes in surface water chemistry in the four regions shown below, known to be sensitive to acid rain: New England, the Adirondack Mountains, the Northern Appalachian Plateau, and the central Appalachians. 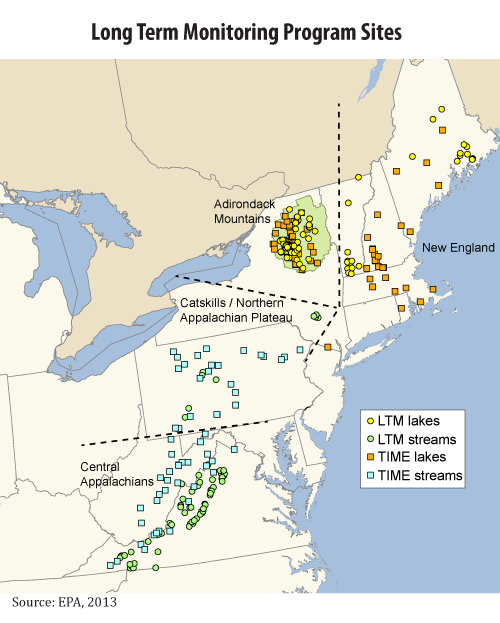 The LTM network provides information on the chemistry of lakes and streams to indicate how water bodies are responding to changes in SO2 and NOx emissions.

This table shows regional trends in acidification from 1990 (before implementation of the Acid Rain Program) to 2015 in lakes and streams throughout the LTM program. Acidified drainage water mobilizes toxic forms of aluminum from soils and clays, harming fish and wildlife. Five chemical indicators of aquatic ecosystem response to emission changes are presented: trends in sulfate and nitrate anions, acid neutralizing capacity (ANC), and base cations. These indicators provide information regarding the surface water sensitivity to acidification and the degree of impact on the aquatic ecosystem. Trends in these measured chemical indicators in drainage waters allow for the determination of whether the water bodies are improving and heading towards recovery of if they are still acidifying. The following is a description of each indicator represented in the table:

Sulfate is the primary anion in most acid-sensitive waters and has the potential to acidify drainage waters and leach base cations and toxic forms of aluminum from the soils.

Nitrate has the same potential as sulfate to acidify drainage waters. However, nitrogen is an important nutrient for plant growth and a large portion of nitrogen inputs from deposition are quickly incorporated into plants as organic nitrogen, leaving less leaching of nitrate into surface waters. Water nitrate concentrations are often variable and reductions in nitrogen deposition are slow to be reflected in long term trends.

Acid Neutralizing Capacity (ANC) is a measure of overall buffering capacity against acidification, and indicates the ability to neutralize strong acids that enter aquatic systems. When ANC is low, and especially when it is negative, stream water pH is also low (less than pH 6, commonly less than pH 5), and may be harmful to fish and other aquatic organisms essential for a healthy aquatic ecosystem. Recovery of an aquatic ecosystem is indicated by increasing trends in ANC and base cations and decreasing trends in sulfate and nitrate concentrations.

Base cations is the sum of the positively charged calcium, magnesium, sodium and potassium ions in soils and surface waters that buffer both sulfate and nitrate anions, thereby preventing surface water acidification. Base cation availability is largely a function of underlying geology and soil age, such that young soils of cation-rich bedrock will tend to have a greater buffering capacity.

This dataset compiles surface water chemistry data for 172 sites (lakes and streams) from 1980 to 2018 and will be updated annually with an approximate lag time of one year. Data are currently collected in four regions in the eastern United States (Virginia, New York, Maine/New Hampshire, and Vermont). The fifth region (Pennsylvania) is no longer sampled but is still included in the dataset. These data are used to calculate trends in surface water chemistry to assess aquatic ecosystem response to changes in sulfur and nitrogen deposition. Water chemistry in this data can be influenced by the ambient flow conditions, such as spring snowmelt or intense rainfall. To be included in the dataset, sites needed to have regular sampling (at least once per year for 20 years).

Number of Streams and Lakes per Region