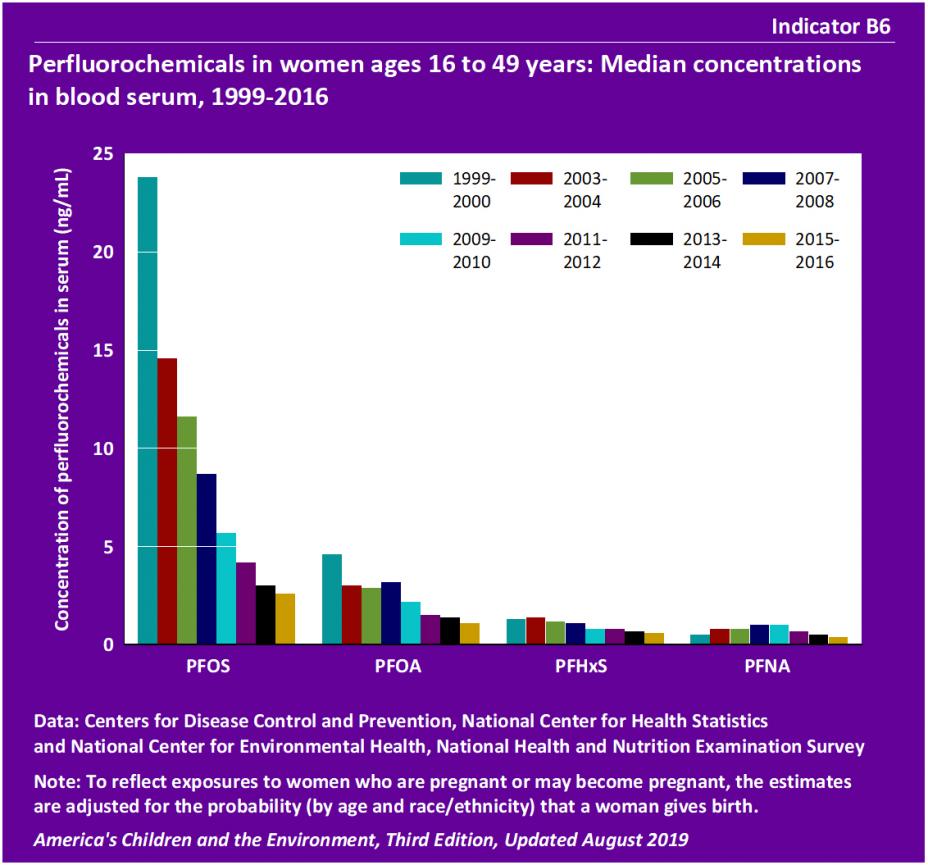 About the PFCs Indicator

Indicator B6 presents information about perfluorochemical (PFC) levels measured in women. The data are from a national survey that collects blood specimens from a representative sample of the population every two years, and then measures the concentration of various contaminants in the blood. The indicator focuses on women of child-bearing age because of concern for potential adverse effects in children born to women who have been exposed to PFCs.

Perfluorochemicals (PFCs) are a group of synthetic chemicals that have been used in many consumer products. The PFCs with the highest production volumes in the United States have been perfluorooctane sulfonic acid (PFOS) and perfluorooctanoic acid (PFOA). Since 2000, efforts have been made toward phasing out production of PFOS and PFOA. However, the fact that some of these chemicals may be persistent in the environment and have a long half-life in humans means that they may continue to persist in the environment and in people for many years, despite reductions in emissions. The major sources of human exposure to PFCs are poorly understood, but may include food, water, indoor and outdoor air, breast milk, and dust. Some PFCs have been widely detected in pregnant women and in umbilical cord blood, suggesting that the developing fetus can be exposed to PFCs while in the womb.

Some human health studies have found associations between prenatal exposure to PFOS or PFOA and a range of adverse birth outcomes, such as low birth weight, decreased head circumference, reduced birth length, and smaller abdominal circumference. However, there are inconsistencies in the results of these studies, and other studies did not find an association between prenatal PFC exposure and birth weight. Animal studies have found a variety of developmental and reproductive effects, though typically at levels much higher than what humans are normally exposed to.

More information about PFCs and Indicator B6 is provided in the updated PFC section of America's Children and the Environment, Third Edition.

The National Center for Health Statistics, a division of the Centers for Disease Control and Prevention, conducts the National Health and Nutrition Examination Surveys (NHANES), a series of U.S. national surveys of the health and nutrition status of the noninstitutionalized civilian population. Interviews and physical examinations are conducted with approximately 10,000 people in each two-year survey cycle. The survey measures PFC levels in blood serum samples collected from NHANES participants.

Detailed Methods for Indicator B6