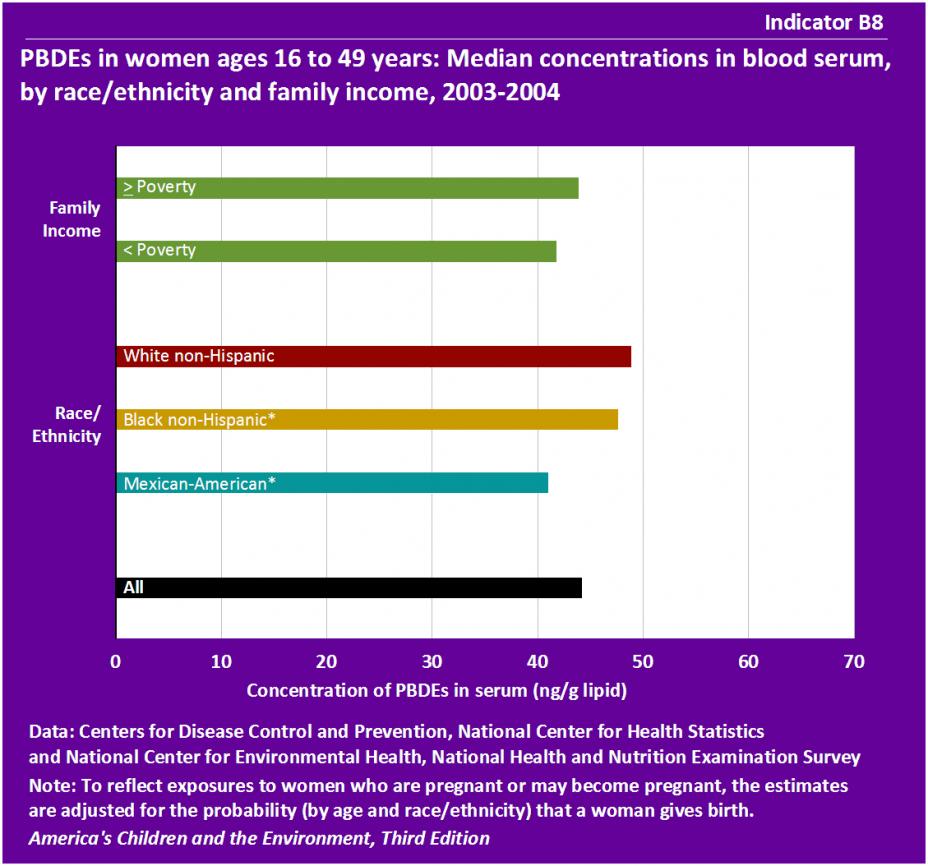 About the PBDEs Indicator

Indicator B8 presents information about polybrominated diphenyl ether (PBDE) levels measured in women. The data are from a national survey that collects blood specimens from a representative sample of the population every two years, and then measures the concentration of various contaminants in the blood. The indicator focuses on women of child-bearing age because of concern for potential adverse effects in children born to women who have been exposed to PBDEs.

PBDEs are a group of brominated flame retardant chemicals that have been incorporated into a variety of manufactured products, including foam cushioning used in furniture and plastics used in televisions and computers. Flame retardants are intended to slow the rate of ignition and fire growth, allowing more time for people to escape from a fire or extinguish it. Three commercial PBDE mixtures have been used in manufactured products since the 1960s and 1970s, when these chemicals came into use. Two of the mixtures have not been imported or manufactured in the United States since 2004 and the third is being phased out by 2013. PBDEs will likely continue to be present in the environment because of their persistent nature and because products manufactured with PBDEs will stay in use for many years (e.g., sofas) and continue to release PBDEs even after disposed. PBDEs are present in house dust and commonly found in foods derived from animals. A child's exposure to PBDEs begins in the prenatal period--PBDEs have been measured in cord blood, fetal blood, and placental tissue and continues in early infancy due to the presence of PBDEs in breast milk. Infants and small children tend to have higher levels of PBDEs in blood than adults due to their frequent contact with PBDEs in house dust.

Concerns about the health effects of PBDEs are based largely on laboratory animal studies, along with findings of the limited number of human epidemiological studies that have been conducted to date. A primary concern from the animal studies is for effects on the developing brain and nervous system, including effects on learning, memory, and behavior. PBDEs are also suspected endocrine disruptors and animal and human studies indicate that PBDEs may alter circulating levels of thyroid hormones.

Indicator B8 presents PBDE levels measured in blood serum of women from the National Health and Nutrition Examination Survey (NHANES).

More information about PBDEs and Indicator B8 is provided in the PBDE section of America's Children and the Environment, Third Edition.

The National Center for Health Statistics, a division of the Centers for Disease Control and Prevention, conducts the National Health and Nutrition Examination Surveys (NHANES), a series of U.S. national surveys of the health and nutrition status of the noninstitutionalized civilian population. Interviews and physical examinations are conducted with approximately 10,000 people in each two-year survey cycle. The survey collects measurements of PBDE levels in blood serum samples collected from NHANES participants.

Detailed Methods for Indicator B8