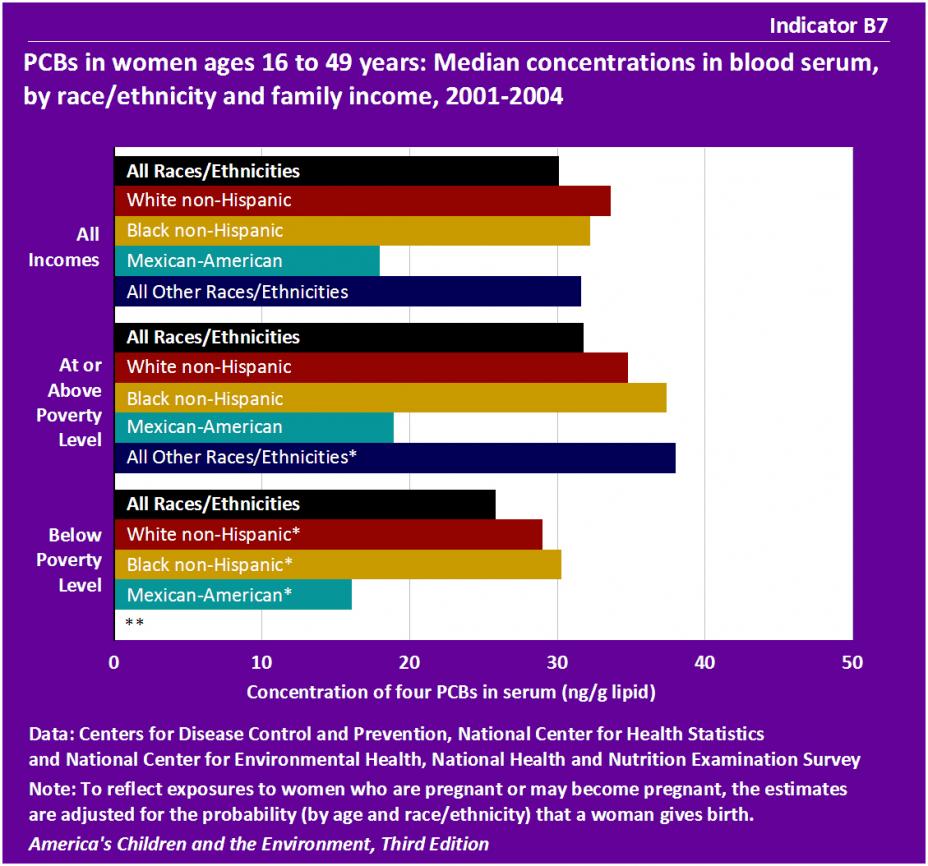 About the PCBs Indicator

Indicator B7 presents information about polychlorinated biphenyl (PCB) levels measured in women. The data are from a national survey that collects blood specimens from a representative sample of the population every two years, and then measures the concentration of various contaminants in the blood. The indicator focuses on women of child-bearing age because of concern for potential adverse effects in children born to women who have been exposed to PCBs.

PCBs are a family of industrial chemicals that were produced in the United States from 1929 to 1979 and used primarily as insulating fluids in capacitors, transformers, and other electrical equipment. PCBs were also used as plasticizers in many paints, plastics, and rubber products, and had numerous applications in industry and building construction. They remain widely distributed in the environment due to their persistent nature. PCBs are present in fish, meat, poultry, dairy products, and breast milk, so dietary intake is an important pathway of exposure. Breast-feeding infants are exposed to PCBs in the milk of mothers with previous exposure. PCBs can also transfer prenatally from mother to fetus. Recent findings suggest that the presence of PCBs in indoor dust and indoor air may also constitute an important exposure pathway for some portion of the population.

Although there is some inconsistency in the epidemiological literature, several reviews of the literature have concluded that the overall evidence supports a concern for effects of PCBs on children’s neurological development. The Agency for Toxic Substances and Disease Registry (ATSDR) has determined that “substantial data suggest that PCBs play a role in neurobehavioral alterations observed in newborns and young children of women with PCB burdens near background levels.”

Indicator B7 presents PCB levels measured in blood serum of women from the National Health and Nutrition Examination Survey (NHANES).

More information about PCBs and Indicator B7 is provided in the PCB section of America's Children and the Environment, Third Edition.

The National Center for Health Statistics, a division of the Centers for Disease Control and Prevention, conducts the National Health and Nutrition Examination Surveys (NHANES), a series of U.S. national surveys of the health and nutrition status of the noninstitutionalized civilian population. Interviews and physical examinations are conducted with approximately 10,000 people in each two-year survey cycle. The survey measures PCB levels in blood serum samples collected from NHANES participants.

Indicator B7 uses the NHANES data to present median concentrations of PCBs, computed as the sum of PCBs 118, 138, 153, and 180, measured in blood serum of women ages 16 to 49 years, stratified by race/ethnicity and level of family income.

Detailed Methods for Indicator B7