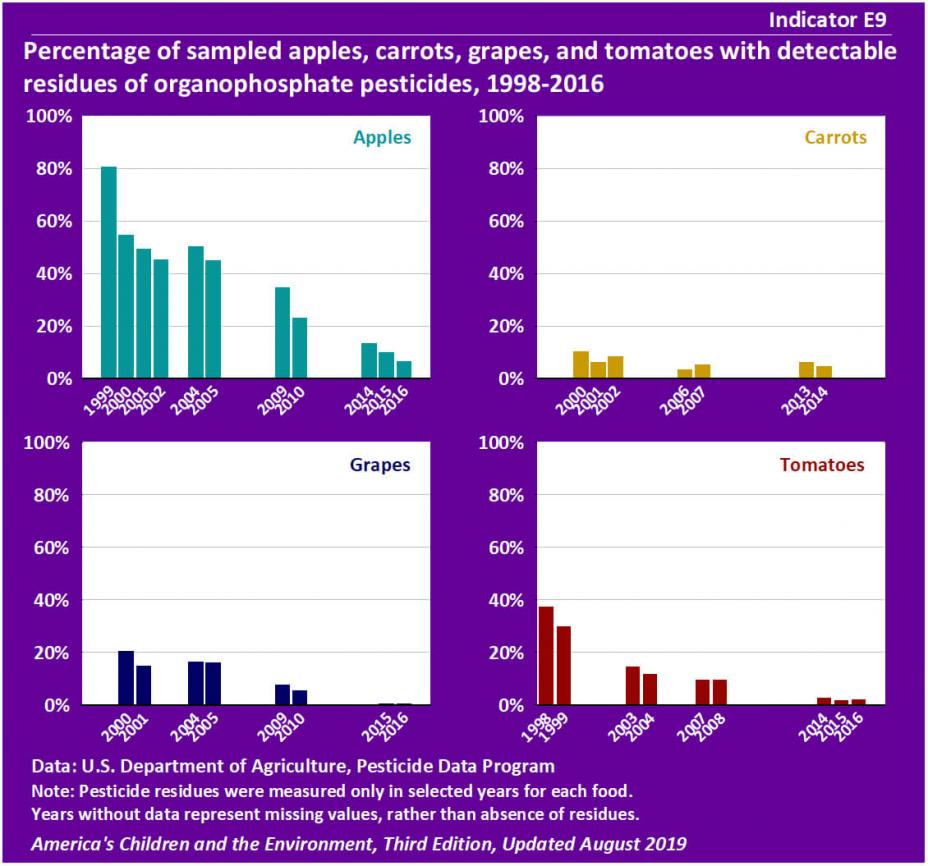 About the Chemicals in Food Indicator

Food contamination can come from multiple sources, including antibiotics and hormones in meat and dairy products, as well as microbial contamination that can lead to illness. In addition, a wide variety of chemicals from man-made sources may be found in or on foods, typically at low levels. Chemicals in foods may come from application of pesticides to crops, from transport of industrial chemicals in the environment, or from chemicals used in food packaging products. Some chemicals in food are naturally occurring and some are from man-made sources, such as application of pesticides to crops. Chemicals of concern for children's health that are frequently found in foods include methylmercury, polychlorinated biphenyls (PCBs), polybrominated diphenyl ethers (PBDEs), bisphenol A (BPA), phthalates, perfluorochemicals (PFCs), perchlorate, and organophosphate pesticides.

The health risks from chemicals in food are dependent on both the actual level of a chemical in the food as well as the amount of the food consumed by individuals. Several chemicals that can be found in foods have been associated with adverse health outcomes including developmental, reproductive, and neurological outcomes. In particular, organophosphate pesticides can interfere with the proper function of the nervous system when exposure is sufficiently high. Since 1999, EPA has imposed restrictions on the use of some organophosphate pesticides on certain food crops and around the home largely due to concerns about potential exposures of children and possible health effects.

More information about chemicals in food and Indicator E9 is provided in the Chemicals in Food section of America's Children and the Environment, Third Edition.

Summary of Methods - Chemicals in Food

Indicator E9 uses the PDP data to present the percentage of sampled apples, carrots, grapes, and tomatoes* with detectable residues of organophosphate pesticides. These four foods were selected from those sampled because they were among the 20 most-consumed foods identified in an analysis by EPA and because data for these foods were available for multiple years.