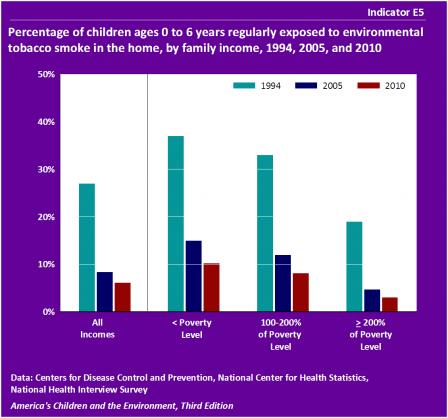 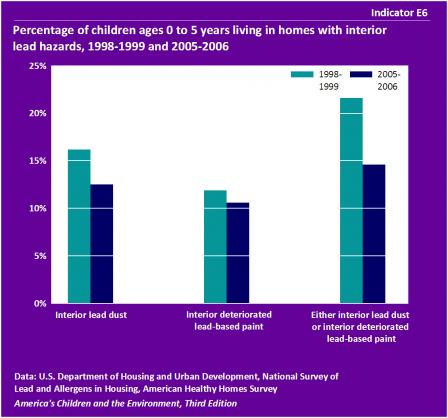 About the Indoor Environments Indicators

Children spend most of their time in indoor environments and may be routinely exposed to chemicals in the air and those that accumulate in dust. Hundreds of chemicals have been measured in indoor air including pesticides, polychlorinated biphenyls (PCBs), phthalates, carbon monoxide, and benzene. Pollutants in indoor environments can come from many different sources like combustion sources (e.g., furnaces, gas stoves, fireplaces, and cigarettes), building materials (e.g., treated wood, paint, furniture, and carpet), cleaning products, and products used for hobbies like arts and crafts. Infants and small children may have the highest exposure to house dust contaminants due to their frequent contact with surfaces where dust gathers like the floor and their frequent hand-to-mouth activity. Two indoor environmental contaminants for which there is extensive evidence of children's health effects are environmental tobacco smoke (ETS) and lead.

ETS, commonly referred to as secondhand smoke, is a complex mixture of gases with at least 250 chemicals known to be toxic or carcinogenic. Children can be exposed to ETS in their homes or in places where people are allowed to smoke. According to the U.S. Surgeon General, there is no safe level of exposure to ETS, and breathing even a small amount can be harmful to human health. The Surgeon General has concluded that exposure to ETS causes sudden infant death syndrome (SIDS), acute lower respiratory infection, ear problems, and more severe asthma in children. Children's exposure to ETS has declined in recent years, due in part to a decline in the percentage of adults who smoke, increased restrictions on smoking in public places, and efforts to reduce the exposure of nonsmokers in homes.

The primary pathways of childhood lead exposure are ingestion of lead-contaminated house dust, soil, and water. The National Toxicology Program (NTP) has concluded that childhood lead exposure is associated with reduced cognitive function and attention-related behavioral problems. EPA has issued a number of regulations to address childhood lead exposure, including requiring all contractors performing renovation, repair, and painting projects that disturb lead-based paint in pre-1978 homes to be certified and follow specific work practices to prevent lead contamination.

More information about indoor environments and Indicators E5 and E6 is provided in the Indoor Environments section of America's Children and the Environment, Third Edition.

U.S. Department of Health & Human Services (HHS): The Health Consequences of Involuntary Exposure to Tobacco Smoke: A Report of the Surgeon General

The National Center for Health Statistics, a division of the Centers for Disease Control and Prevention, conducts the National Health Interview Survey (NHIS), a series of annual U.S. national surveys of the health status of the noninstitutionalized civilian population. The interviews are conducted in person at the participants’ homes by asking a parent or other knowledgeable household adult questions regarding the health status and behavior of household residents.

Indicator E5 uses the NHIS data to present the percentage of children ages 0 to 6 years regularly exposed to environmental tobacco smoke in the home, stratified by family income. For these indicators we used the responses to the following questions: “In a usual week, does ANYONE who lives here, including yourself, smoke cigarettes, cigars, or pipes anywhere inside this home?” If yes, then the following question was asked: “Usually, about how many days per week do people WHO LIVE here smoke anywhere INSIDE this home?”

The American Healthy Homes Survey (AHHS) was conducted from 2005-2006 to update the National Survey of Lead and Allergens in Housing (NSLAH), which was conducted from 1998-1999. Samples of paint, dust, and soil were collected from a nationally representative sample of housing in the United States and analyzed to determine their lead content to estimate the prevalence of children who may be exposed to household lead. These surveys were conducted by the United States Department of Housing and Urban Development (HUD).