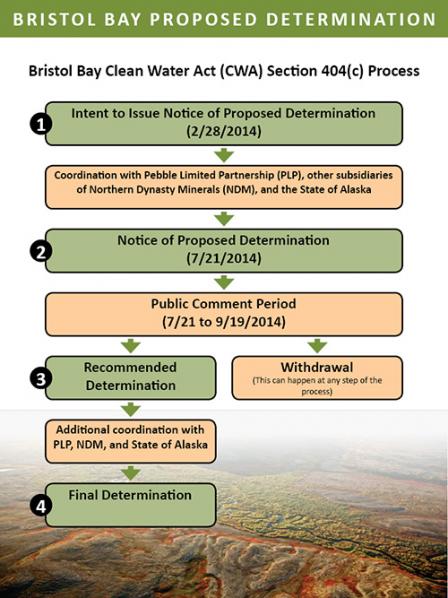 The U.S. Army Corps of Engineers authorizes thousands of Section 404 permits every year, and the EPA works with the Corps and developers to resolve environmental concerns so projects can move forward. However, the Clean Water Act, specifically Section 404(c), also authorizes the EPA to prohibit or restrict fill activities if EPA determines a project would have unacceptable adverse effects on fishery areas.

The EPA has used its 404(c) authority sparingly, beginning the process in 30 instances and issuing final determinations only 13 times. The EPA’s use of the authority has typically involved major projects with significant impacts on some of America’s most ecologically valuable waters. The Section 404(c) process (see figure at right) allows for substantial input from the public, Alaska Native Claims Settlement Act Corporations, the state, the mining companies involved with the Pebble deposit and the tribes.