Note: EPA no longer updates this information, but it may be useful as a reference or resource.

In January 2014, after three years of rigorous scientific study, EPA released our final assessment The Effects of Large Scale Mining on the Salmon Ecosystems of the Nushagak and Kvichak Rivers.

Public involvement was essential to ensure that we heard and understood the full range of perspectives on the assessment and the potential effects of mining in the Bristol Bay region. 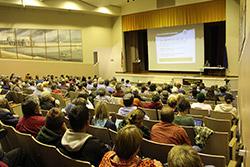 EPA prepared the following detailed responses for public comments received on the April 2013 and May 2012 drafts of the assessment.

The public was invited to nominate qualified scientists as potential peer reviewers and to provide oral comments and observe discussion among the peer reviewers during a peer review meeting in August 2012.