Why We Studied the Bristol Bay Watershed 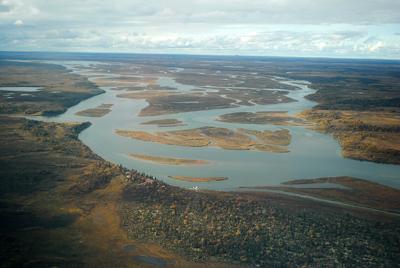 The millions of salmon that return to Lake Iliamna each year pass through this braided section of the Kvichak River.

We launched the study in response to petitions from federally recognized tribes and others who wrote to EPA with concerns about how future large-scale mining could impact Bristol Bay fisheries. Other tribes and stakeholders requested that EPA wait for mining permit applications to determine the potential environmental impacts of mining. The assessment provides a better understanding of the Bristol Bay watershed and will inform consideration of large-scale development in the area.

The land area draining to Bristol Bay consists of six major watersheds: From west to east, the Togiak, Nushagak, Kvichak, Naknek, Egegik, and Ugashik River watersheds, and a series of smaller watersheds draining from the North Alaska Peninsula. Our assessment focuses primarily on the Nushagak and Kvichak River watersheds, the main areas in the watershed open to large-scale resource development.

What did we learn? 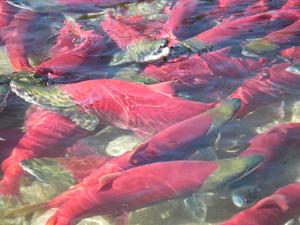 Sockeye salmon get their famously bright red color only after they return to freshwater to spawn.

Salmon and ecological resources
We characterized the region’s ecological resources, particularly in terms of Pacific salmon, rainbow trout, and Dolly Varden in the Nushagak and Kvichak River watersheds. We also described the general condition of ecological resources in the Bristol Bay watershed, which include at least 29 fish species, 190 bird species, and more than 40 terrestrial mammal species in freshwater habitats.

Role of salmon in indigenous populations and economy
We described the role of salmon in Alaska Native cultures present in the Nushagak and Kvichak River watersheds. The Yup’ik and Dena’ina living in these watersheds are two of the last intact, sustainable salmon-based cultures in the world. There are 31 Alaska Native villages in the wider Bristol Bay region, 25 of which are located in the Bristol Bay watershed. Many residents depend on a salmon subsistence-based economy.

How was the assessment conducted?

EPA compiled a team of scientists with expertise in fisheries biology, mining, geochemistry, anthropology and other disciplines to develop the Bristol Bay Assessment. These experts reviewed existing information developed and compiled by the State of Alaska, federal and state resource agencies, the mining industry, tribes and scientists from around the world. The sources include peer-reviewed research published in scientific journals, state and federal agency reports, knowledge of agency staff, input from other experts, and knowledge from tribal Elders.