Clean Air Act permitting (minor New Source Review (NSR), non-attainment NSR, Prevention of Significant Deterioration, and Part 71 Operating permits) in the 8 Tribal Nations is the responsibility of the EPA Region 2 with the exception of the minor NSR permitting for the St. Regis Mohawk Tribe, which is the responsibility of the Saint Regis Mohawk Tribe Environment Division. However, thus far, there are only Part 71 Operating Permits issued by EPA for the 8 Tribal Nations.

There are 8 tribal nations throughout New York State:

EPA approves those tribal regulations that have been formally submitted as Tribal Implementation Plan (TIP) revisions and which the Agency determines meet the requirements of the Clean Air Act. St. Regis Mohawk is the only tribe, out of 8 tribes, that has a federally approved TIP. 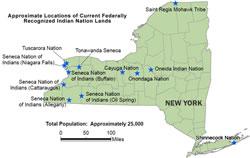