On This Page
Other Pages and Websites

We often hope to obtain information about the effects of individual stressors on an ecological response from measurements collected in the field that are subject to influences of many natural and anthropogenic factors.

Questions to be asked in this setting may include:

The first issue listed is usually viewed as interaction or effect modification, conceptually distinct from the confounding problem that is the subject of this page. Confounding is usually formulated as an inaccurate characterization of the role of one variable, as a result not taking other variables into account.

Stratification and Other Restrictions

When estimating the effects of a given stressor on a biological response, one must select other variables that need to be included in the analysis (e.g., by stratifying on the concomitant variables or including them as explanatory variables in a multiple regression model). Some general principles for selecting these variables are described below.

Decisions on the variables to be included should be based on an ecological understanding of the relationships between different variables. Identifying important variables and their hypothesized causal relationships is facilitated by construction of a causal diagram (or conceptual diagram). Subsequent approaches to data analysis can depend on how concomitant variables appear in the causal diagram. For example, stratifying on a variable that is subject to effects from the stressor of interest should be avoided, because doing so would essentially remove the effect of the stressor of interest (Cochran and Cox 1957, p. 83; Pearl 2009, Section 3.3). 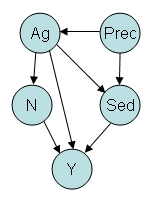 Figure 5. Example of a causal diagram showing different linkages between total N (N) and some ecological response (Y). Other circles represent percent agriculture (Ag), substrate sediment (Sed), and precipitation (Prec). Arrows indicate the direction of the hypothesized causal relationship.When using a causal diagram to choose concomitant variables, consideration can be given to recently developed criteria that identify a "deconfounding" set from a causal diagram (Morgan and Winship 2007, Ch. 3). According to this approach, a set of appropriate concomitant variables can be identified by selecting variables that "block" all "back-door" pathways linking the stressor of interest to the response variable. The following example illustrates the basic idea of blocking a pathway. Suppose one is interested in the effects of Nitrogen (N) on an ecological response variable, Y, and the causal diagram includes additional pathways (in this context, termed "back-door" paths) linking N to Y (Figure 5):

Note that to identify a back-door path, we ignore the direction of causality, except that we require a causal effect on Y. Also note that this diagram is for illustrative purposes only and does not represent all possible pathways.

The back-door criterion is mathematically based, but many features are supported by intuition, an exception being the somewhat convoluted conditions for colliders. Attempts to fix the values of colliders in data analysis can result in artifactual correlation among other variables. A simple example of an ecological collider variable is the concentration of a chemical in a body of water, affected causally by measured sources X and Z. In a stratum with a restricted range of the sum X + Z, the variables are negatively correlated: Relatively high values of X must, in order for the sum to remain approximately constant, be paired with relatively low values of Z, and so on.

In theory, deconfounding sets are sufficient to eliminate confounding bias. In a given situation, multiple sets of concomitant variables may satisfy the criterion. One may wish to evaluate the sensitivity of results to different sets of concomitant variables. Also, because the approach focuses specifically on bias, satisfying the criterion is not an absolute requirement. Effects on variance can also be taken into account, in principle. For example, land-use variables that serve as sources of multiple stressors may be favored by the criterion, serving to block multiple causal pathways, possibly including stressors not adequately measured. Deconfounding sets might include (say) agricultural land use, or some stressors of agricultural origin. If biological effects of agriculture are largely accounted for by specific stressors, agriculture might be excluded, at a risk of some increase in bias.

Additional study is necessary to identify biological considerations important for application of this approach, which is mathematically based. In the mean time, the approach does identify possible pitfalls in the use of conditioning approaches, such as artifactual correlations resulting from inappropriate treatment of so-called "collider" variables.

Limitations of the Balancing Methodology

While a stratification approach has been emphasized, the roles of concomitant variables will often be approached in practice using regression modeling. Inferences related to one variable may be more accurate when based on a model that accurately represents the roles of multiple variables.

The statistical evidence favoring the need to incorporate a given variable in the model can be evaluated using model comparison procedures such as partial F tests, likelihood ratio tests, and Akaike or Bayesian Information Criteria (AIC, BIC).

Effective use of regression models can involve advanced issues such as variable selection, predictor interactions, collinearity, and influential observations, and error in measurement of predictions.

For some purposes, analysis of covariance (ANCOVA) can be viewed simply as regression analysis with a categorical variable coded using dummy variables. However, specific focus on the ANCOVA case has yielded insights on biases in analysis of observational data (Snedecor and Cochran 1989). ANCOVA is sometimes viewed as approximately adjusting treatment groups to common values of a covariate.