On This Page
Other Pages and Websites

Basic multivariate visualization can be useful for understanding stressor correlations. Such an understanding can be helpful in dealing with issues such as confounding and collinearity that arise in evaluating multiple stressors.

For present purposes, this page emphasizes analysis of stressor variables and ignores biological response variables. Relevant resources are not reviewed comprehensively. Instead, a few basic methods are illustrated. Most of the methods considered here are discussed in Venables and Ripley (2004), and Crawley (2007), both of which are particularly useful for R implementations.

An automated variable clustering method can be used to group variables based on pairwise correlations. Figure 1 displays clustering results generated using the varclus() function in the R contributed package Hmisc (Harrell 2002), which provides hierarchical clustering based on several measures of correlation. While the measures used for the illustration do not distinguish between positive and negative correlation, the bothbos option would be specifically sensitive to positive associations. R software, packages, and documentation are available for download on the R Project for Statistical Computing website. 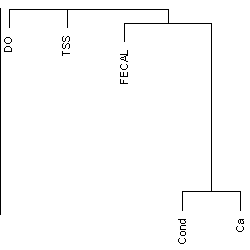 Figure 1. A dendrogram grouping variables based on squared Spearman rank correlation.Figure 1 displays clustering results using a dendrogram, a tree-like diagram. To form a dendrogram, clustering is initialized by joining the pair of variables with the highest correlation (calcium concentration [Ca] and specific conductivity [Cond], in the example). Remaining variables are incorporated in steps. Each step initiates a new cluster by combining two variables, adds a variable to an existing cluster, or combines two clusters. The varclus default decision at a given step is the so-called complete-linkage criterion: For any pair of clusters, the algorithm uses only the maximum correlation over pairs of variables with one variable in each cluster. Additional options and details are described in R on-line documentation for functions varclus and hclust (also see Venables and Ripley 2003 and Harrell 2002.)

PCA is one of the most widely used multivariate statistical methods. The method is based on computation of summary variables that are weighted combinations of the original variables. (Each variable is multiplied by a weight and the weighed variables are added to form an index.) The summary variables computed in PCA are the principal components (PC), and the weights are loadings.

Figure 2 illustrates PCA based on two variables, calcium concentration (Ca) and conductivity (Cond). These variable were chosen for purely illustrative purposes, based on having a strong correlation. Each variable was transformed to logarithms and then standardized to have mean zero and variance one. Starting with the two variables Ca and Cond, PCA computes two summary variables, the PCs, which are uncorrelated. In this example, PC1 gives distance along an oblique axis where the points cluster. PC2 gives the displacement in a direction perpendicular to PC1. Evidently, the variance of PC1 is larger than the variance of PC2. The sum of variance of the two PCs is equal to the sum of variances for the original variables (in this case, 2). Thus we can say that each PC "accounts for" some percentage of variance. Indeed, in the example, the variance of PC1 scores is 1.39, so PC1 accounts for a fraction 1.39/2 = 69% of variance. 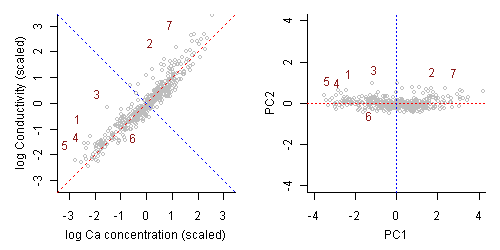 Figure 2. PCA illustrated with two variables. For each sample (represented by a point) the score for PC1 is a position along an axis where the points cluster, indicated with a red dotted line. The score for PC2 (blue dotted line) is a position in a direction perpendicular to the PC1 axis. The right-hand plot displays the same data, but with samples plotted according to PC1 and PC2, rather than Ca and cond. Selected points have been labeled with sample numbers. 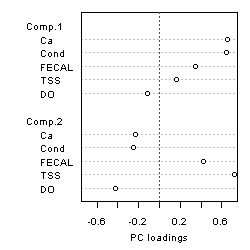 Figure 3. The interpretation of stressor associations based on principal components focuses on PC loadings. Here loadings are displayed for PC1 and PC2, from an analysis with five environmental variables: Ca = calcium concentration, Cond = conductivity, FECAL = fecal coliform concentration, TSS = total suspended solids, and DO = dissolved oxygen concentration.Results of PCA may be used in various ways in data analysis. Sometimes, a group of variables is combined into an index by computing PC1. In regression analysis, a few PCs are sometimes used in place of the original variables, to avoid a collinearity problem.

For purposes of analyzing associations among biological stressors, we emphasize interpretation of the PC loadings. Recall that these are the weights assigned to individual variables that are combined to compute a PC. Figure 3 displays loadings for a dataset that includes calcium concentration and conductivity, as for Figure 2, and three additional variables. Loadings, generated with R function princomp, are displayed using the dotchart function. A PC may be interpreted as representing the variables with loadings with largest magnitudes (positive or negative). In the example, PC1 appears to represent the strongly correlated variables Ca and Cond. PC2 appears to represent high total suspended solids (TSS) and fecal coliforms (FECAL) and low dissolved oxygen.

Jolliffe (2002) treats PCA comprehensively, including PCA derivations that do and do not involve multivariate normality , relationships to factor analysis and other multivariate methods, PCA biplots (see below), use in regression analysis, outlier-resistant methodology, choice of the number of PCs to interpret, applications to correlated data, and illustrations with applications to data from earth sciences.

Practical Defaults and Options for PCA 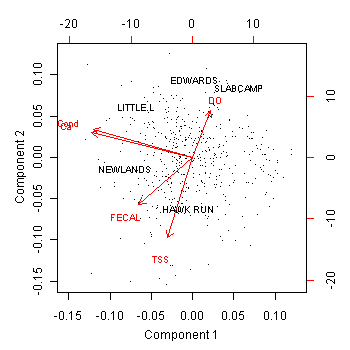 Figure 4. A biplot can be used to display information on correlations among variables, simultaneously with information on stressor profiles for individual sampling locations. For five environmental variables a PCA biplot suggests a "conductivity/Ca" axis, uncorrelated with a low DO/ high TSS axis. FECAL has a relatively higher correlation with TSS/DO than with conductivity/CA. Stream names have been included for selected sampling locations, indicating where particular samples fall in the stressor space.Certain techniques provide visualization of information on individual samples, along with information on variable correlations. Such visualization may be helpful, for example, in detecting groups of samples with similar stressor profiles, or in comparing sample locations with regard to position in a multidimensional stressor spaces. For PCA, it is common to plot the original samples as points, in a space defined by a few PCs, usually the 2-dimensional space of PC1 and PC2.

The biplot approach (see Venables and Ripley 2003) provides more specific information on the original variables, which are displayed as vectors. The prefix "bi-" refers to simultaneous display of information on variable correlations and samples. The correlation between two variables is represented, in the biplot, by the cosine of the angle between two vectors. In particular, the correlation of two variables is -1, 0, or 1, if the angle between the two in the biplot is 180, 90, or 0 degrees, respectively. Distances between points are multivariate distances in the space of original variables. Categorical variables such as watersheds or ecoregions may be incorporated into the labels as points.  The biplot approach can be based on multidimensional scaling, as well as PCA. Figure 4 illustrates the use of the R function biplot.princomp().

Correlations and Collinearity in Multiple Regression

In multiple regression, "collinearity" is a situation where some regressor variable can be approximated as a linear combination of other regressors. Basic regression methods cannot provide accurate inferences about the specific roles of variables that are involved in collinearity. Collinearity can result from some combination of correlations of variables in the population, or data that are few relative to the number of variables. Some regression texts emphasize that evaluation of regressor correlations early in a modeling effort can help the analyst to select a set of candidate predictors in such a way that collinearity problems are minimized (Draper and Smith 1981, Ch. 8; Harrell 2002).

Stressor Correlations in Space and Time

Biological monitoring data is ordinarily obtained by sampling a set of environmental locations, on multiple occasions over time. Whereas autocorrelation generally needs to be taken into account for statistical tests and confidence intervals, Jolliffe (2002) suggests that useful results may be obtained by analyzing data from all locations and occasions at once, using a simple PCA, followed by characterization of the spatial and temporal patterns from plots of the most important PCs. A specialized variant of PCA for application to space-time data is the method of empirical orthogonal functions (EOFs; Banerjee et al. 2004, Jolliffe 2002).