Several tools are available for assessing how closely the modeled taxon-environment relationship matches observations. Significance tests can be used to test whether the addition of a term in the model reduces the residual variance in the model by a statistically significant amount. The area under the receiver operator characteristic curve provides insight into the predictive power of the model. Also, prior to running these tests, it is useful to consider how likely your model is overfit.

Statistical tests for whether the coefficients of the parametric regressions are significant are automatically listed in R by the summary command. These tests are the commonly used z-tests, but can be unreliable in certain cases. A more reliable approach for testing the significance of different terms in the regression is to apply chi-square tests. These tests compare the existing model with a set of simpler, nested models. These tests also can be used to test the significance of different non-parametric models. Statistical scripts for performing significance tests are available under the R Scripts tab of this section. 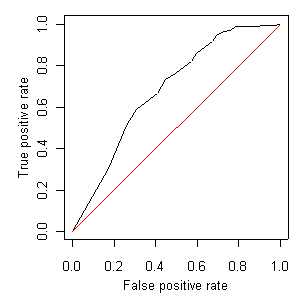 To avoid overfitting regression models, it is generally recommended that at least 10 to 15 observations of the response variable being modeled occur in the data set for each degree of freedom in the explanatory variables (Harrell 2001). 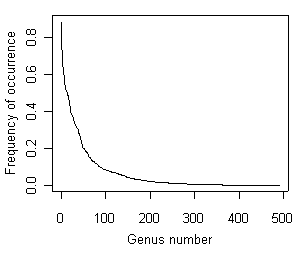 Species-abundance relationships suggest that many taxa are observed infrequently and only a few are relatively common (Figure 10). Thus, the number of taxa for which regression models can be developed may be limited.