On This Page
Topics In Computing Inferences
Other Pages And Websites

Maximum likelihood (ML) inferences use taxon-environment relationships of taxa that are present and taxa that are absent from a site to estimate the most likely environmental conditions. The simplest ML inference would use information from a single taxon.

In Figure 16, the relationship between the probability of capturing the genus Heterlimnius and stream temperature is shown. However, the vertical axis has been re-labeled to reflect the new question we are using the taxon-environment relationship to answer: what is the most likely temperature at the site, given that Heterlimnius is observed? In this case, the most likely temperature would be approximately 8° C, where the likelihood is maximized. 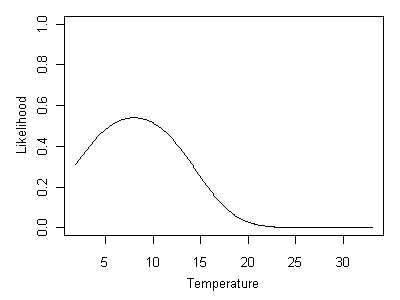 What if Heterlimnius is absent from the site?

We can easily obtain the likelihood curve for an absent species by substracting the taxon-environment curve from 1 (shown in Figure 17). A stream temperature of 8° C is the least likely possibility, whereas temperatures above ~20° Care all equally likely. 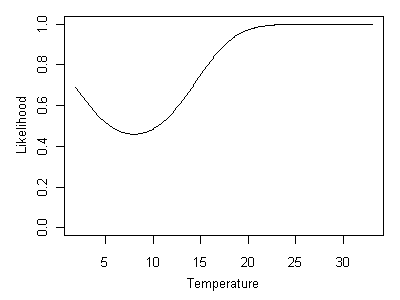 Additional taxa can be incorporated into the inference by multiplying the likelihood curves associated with each taxon. In Figure 18, the ML inference that results from both Heterlimnius and Malenka being present at a site is shown. The red line shows the product of likelihood curves for Heterlimnius and Malenka, rescaled such that its maximum value is 1. In this case, the ML inferred temperature is approximately 11° C. 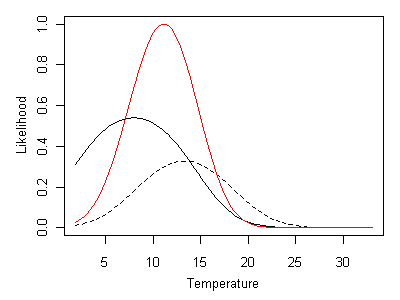 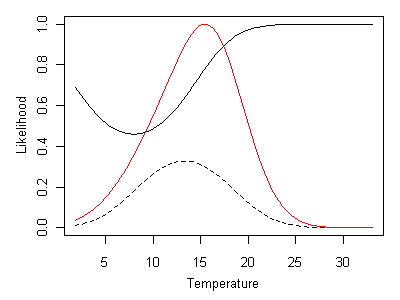 ML inference also offers the opportunity to quantify confidence limits on the inference, by examining the shape of the final likelihood curve. 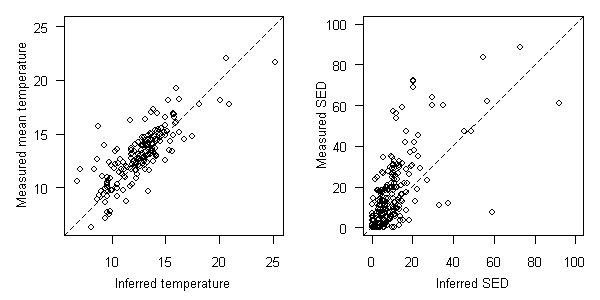 At the present time, the script for ML inference only works with parametric regressions. The ML solution to non-parametric taxon-environment relationships is considerably more difficult.

To use mlsolve with locally-derived taxon-environment relationships, you must use the script taxon.env (see the R Scripts tab) to analyze your local data and properly format the resulting models.