Topics In Estimating Taxon-Environment Relationships
Other Pages And Websites

The process of curve classification can be accomplished analytically or graphically, depending on whether parametric generalized linear model (GLM) or nonparametric generalized additive model (GAM)  regressions are used to define the taxon-environment relationship. In a parametric regression (see Equation 3 on Parametric Regression page), the curve can be classified according to the statistical significance of different coefficients in the regression. Specifically, if the quadratic term in Equation 3 reduces the model deviance by a statistically significant amount, then the relationship is unimodal. Otherwise, the model equation reduces to a linear relationship, and the relationship can be classified as either increasing or decreasing, depending upon the sign of the linear coefficient (b1 in Equation 3). In rare cases, the quadratic term is statistically significant but the sign of the coefficient (b2 in Equation 3) is positive, indicating that the relationship is concave up. In these cases, the data and the estimated taxon-environment relationship should be examined more carefully to identify reasons for the anomalous behavior.

A graphical approach to curve classification is required for nonparametric regressions. The maximum modeled occurrence probability, in this case, is compared with the confidence limits on either side of the taxon optima. If a horizontal line drawn through the maximum mean occurrence probability deviates from the upper confidence limits on both sides of the taxon optima (e.g., Malenka in Figure 15), then the taxon is designated as unimodal. If the line deviates from the upper confidence limit only on the right-hand side of the taxon optimum (e.g., Heterlimnius in Figure 15), then the taxon is designated as a decreaser. If it deviates only on the left-hand side, then the taxon is designated as an increaser. A parallel set of conditions can be specified for the lower confidence limit. Assuming that human activities cause an increase in the value of the environmental gradient, increasers would be identified as tolerant taxa, decreasers would be identified as intolerant taxa, and unimodal taxa would be designated as intermediately tolerant. 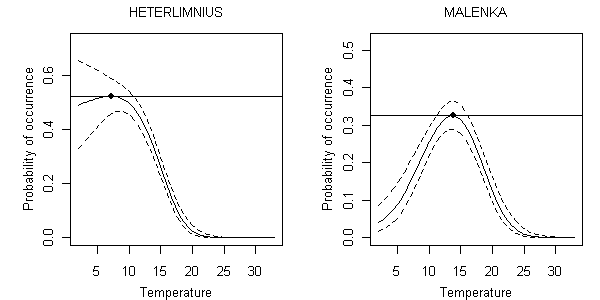 Curve classifications allow taxa to be broadly characterized as tolerant or sensitive to changes in the value of specific environmental gradients. These tolerance classifications can then be useful for computing biological metrics. Statistical scripts for defining curve shape are available under the R Scripts tab of this Appendix.