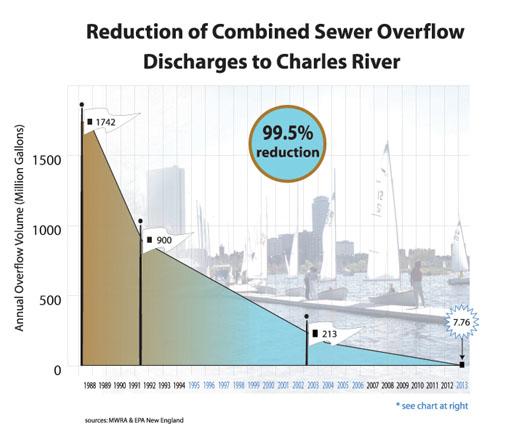 View a larger version of image.
The controls MWRA implemented resulted in a dramatic reduction of CSO discharges to the lower Charles River. Reductions went from over 1.7 billion gallons per year prior to 1988, down to approximately 20 million gallons (MG) in 2014. Discharges are projected to drop to 6.88 MG in the next few years, and over 90% of those discharges will be treated at the Cottage Farm facility. This represents an approximately 99% decrease in CSO discharges to the Lower Charles River since 1988.

In 1995, EPA launched an ambitious effort make the Charles River both fishable and swimmable. Thanks to partners in numerous federal, state and local agencies as well as nonprofit groups, private institutions and citizens, the Clean Charles River Initiative has improved water quality in the river.

Using sound science, cutting-edge technologies and strong targeted enforcement, EPA and its partners have determined the causes of pollution and poor water quality in the River.

Sewage discharges from CSOs to the river declined significantly as a result of the 2005 settlement between EPA and the MWRA. As a result of various CSO projects throughout the lower Charles (in many cases, eliminating CSOs entirely, MWRA has reduced CSO discharges by an impressive 99.5%).

We have made significant progress targeting bacterial sources of pollution in The River. But, there continue to be problems with excessive amounts of nutrients entering the river, especially phosphorus. See the Environmental Challenges for updated overview of these latest challenges.

Sound Science on the Charles River

Please see Reports and Links for a more complete view of reports on the Charles River.

Today we have a river that is safe for recreational boating virtually all of the time, and safe for swimming 70% of the time. It is a river that is now a resource for an active wind surfing community, an annual swim race and catch and release fishing. Indeed, we are much closer to the original goals of making the Charles both fishable and swimmable. 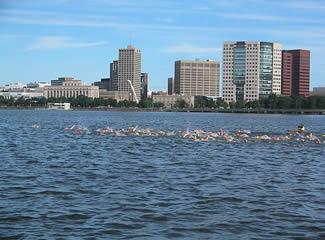 Starting with 2019, the Charles River Watershed Association (CRWA), in coordination with EPA, will begin using an assessment method that encompasses all 80 miles of the mainstem river as well as two tributaries to provide the public with a more accurate assessment of local water quality conditions and greater transparency for all stakeholders. The report card will be based on E. coli data from thirty-nine sampling sites, collected monthly by CRWA volunteers. While the new grading system continues to measure the percentage of time water quality samples meet bacterial swimming and boating standards, it also incorporates cyanobacteria (toxic blue-green algae) blooms and combined sewer overflows (CSOs), which are both public health hazards, especially for boaters and anyone who comes into contact with the water. The Charles will now receive grades for six waterbody segments: the Upper Watershed (Hopkinton to Medfield), the Upper Middle Watershed (Sherborn to Dedham), the Lower Middle Watershed (Newton to Waltham), the Lower Basin (Watertown to Boston), the Stop River, and the Muddy River.

**Figures represent percentage of time that each waterbody stretch is affected by a cyanobacterial bloom or combined sewer overflow.

For more information on how the grades are calculated please read the Frequently Asked Questions, review the report card map, and the data on CRWA's website.

Grading Criteria Prior to 2019

When assessing water quality to assign a grade to the lower Charles River prior to 2019, EPA used a comparison with previous years and general trends, as well as qualitative criteria, as follows:

The grade is based on a comparison with previous years and general trends. Given that the grades are based on a limited set of data, some annual fluctuations depending on weather are expected. Figures represent the percentage of time that state bacterial standards are met.

Charles River in the News