Ports Primer: 2.1 The Role of Ports

intermodalUsed to indicate movements of cargo containers interchangeably between transport modes – i.e. motor, water and air carriers – and where the equipment is compatible within multiple systems. For example, boxes of hot sauce from Louisiana are stuffed into metal boxes called containers at the factory. That container is put onto a truck chassis (or a railroad flat car) and moved to a port. There the container is lifted off the vehicle and lifted onto a ship. At the receiving port, the process is reversed. Intermodal transportation uses few laborers and speeds up the delivery time. transportation system. Over 95 percent of the cargo

cargoThe freight (goods, products) carried by a ship, barge, train, truck or plane. entering the United States arrives by ship,1 and over 360 commercial ports nationwide help to transfer these goods to their destinations in communities across the nation.2 Our ports also serve as a significant resource for national defense and emergency preparedness.3 Understanding the role of ports can help residents more effectively engage with decisions that impact near-port communities.

In addition, to their impact on the national economy, ports also have an impact on local and regional economies. For more on these economic impacts, see Section 6 (Local and Regional Economy).

The focus of the Ports Primer is on ports

port The term generally refers to places alongside navigable water (e.g., oceans, rivers, or lakes) with facilities for the loading and unloading of passengers or cargo from ships, ferries, and other commercial vessels. These facilities may be operated by different entities including state or local public port authorities, private terminal operators, and federal agencies. Activities associated with ports include operation of vessels, cargo handling equipment, locomotives, trucks, vehicles, and storage and warehousing facilities related to the transportation of cargo or passengers as well as the development and maintenance of supporting infrastructure (also see inland ports)., however, many considerations related to ports may also apply at large intermodal freight facilities that are not near waterways and which are sometimes referred to as inland ports

inland port Term sometimes used to describe a port that is not located on a coast (e.g. Great Lakes or Mississippi River ports) or an area with large intermodal freight facilities that is not near navigable water (e.g., landlocked intermodal rail and truck facilities).. Additionally, while this Ports Primer emphasizes the goods movement aspect of port-related functions, many issues (e.g., idling ships) apply to travel/passenger aspects of port functions as well. 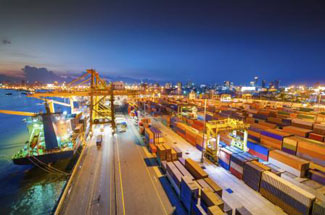 portThe harbor area where ships are docked. are gateways for domestic and international trade. U.S. seaports handle over 99 percent of the country’s overseas cargo by volume and 65 percent by value, according to The American Association of  Port Authorities

Port Agency or Port AuthorityA government entity. A port authority may own facilities in one or more ports, and a port authority’s domain may include both seaports and airports. It may be difficult to tell visually where the control of a port authority ends. For example, port authorities do not control private terminals (except in as much as landlord ports can impose lease-based controls on private terminal tenants), military operations and industrial facilities located in or around port facilities. less Definition 2: Autonomous (independent) port authority: a self-sustaining, self-governing public body. Definition 3: Semi-autonomous (semi-independent) port authority: a public body subject to certain state controls. Definition 4: Bi-state or regional port authorities: a public body created by agreement between two or more states. Definition 5: Port authorities with limited agency or power: a public body limited to certain actions such as bonding. Definition 6: Divisions of state, county or municipal government: a government department. Definition 7: Independent port or navigation districts: entities that function as "special purpose" political subdivisions of a state with defined geographic boundaries over which they have authority. (AAPA).4 AAPA is a trade association representing public port authorities in the United States, Canada, the Caribbean and Latin America. These figures are significant, given that the value of all international trade accounts for nearly 30 percent of the U.S. Gross Domestic Product (GDP)

Gross Domestic Product (GDP)The total value of goods and services produced by labor and property located in the United States. As long as the labor and property are located in the United States, the supplier (workers, owners) may be either U.S. residents or residents of foreign countries.. To meet increasing consumer demands, more ships are calling at U.S. seaports than ever before and the ships are getting bigger.5 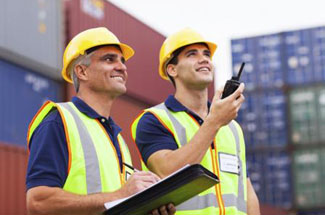 In many communities, ports are significant sources of local employment. Ports are employers and also support employment in related sectors such as trucking and rail transportation. According to the American Association of Port Authorities, deepwater ports in the U.S. supported 541,946 jobs in 2014. The average salary for these workers was $54,273. In addition, port activity generated over 23 million jobs in related sectors and through their overall economic impact on the surrounding communities.6

Ports handle a range of commodity mixes. Some ports focus on one type of commodity; some are more diversified. 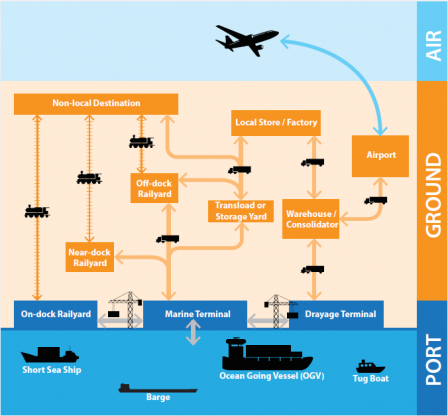 goods movementThe distribution of freight (including raw materials, parts and finished consumer products) by all modes of transportation including marine, air, rail and truck. to businesses in local communities and worldwide markets. As illustrated in the figure at right, ports can connect goods to consumers through our highway system, railroads, air transit and domestic marine highways (water transportation routes). These ports include seaports as well as smaller intercoastal and inland ports that facilitate movement of goods between the seaports and local communities. Intermodal Transportation refers to movements of cargo between different kinds of transport modes.

As trade growth continues, ports are considering expanding their internal capacity by increasing efficiency and investing in infrastructure to support larger ships. Ports may also coordinate with communities, Metropolitan Planning Organizations, state and federal Departments of Transportation, and other agencies to expand transportation capacity outside the port to avoid bottlenecks created by limitations from other modes of transportation.

capacityThe available space for, or ability to handle, freight.

In addition to serving as economic drivers and transportation hubs, ports play an important role in national defense. Fifteen of our commercial seaports have been named Strategic Seaports by the U.S. Department of Defense (DOD) (see the map at right). These ports can help to support military deployments because 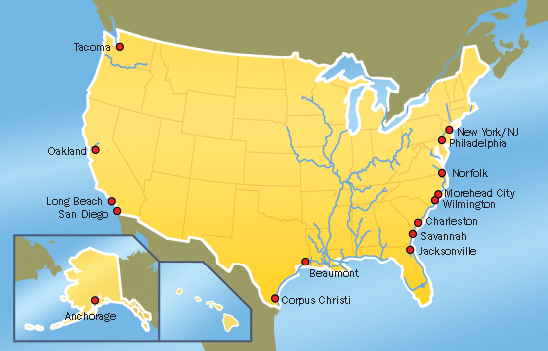 Strategic Seaports of the United Statesof their large staging areas, connections to rail infrastructure and ability to load non-containerized cargo. Ports can also use these capabilities to support emergency relief activities, such as from the Federal Emergency Management Agency, for natural disasters.

The DOD is particularly reliant on Strategic Seaports during military surge operations. For example, during Operation Iraqi Freedom, the DOD used these ports to load combat vehicles and aircraft. These operations require Strategic Seaports to have adequate rail infrastructure, significant staging areas for military cargo and workers skilled in handling non-containerized military equipment. As our commercial seaports continue to experience increasing levels of commercial containerized shipping, port staging areas and rail capacity to support military operations may be strained. 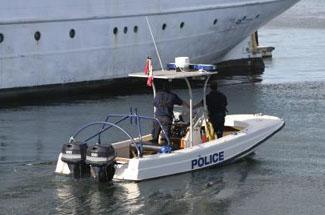 Security at ports is an important concern. With so much cargo traffic passing through, it is important for security measures to adequately monitor and protect the ports while still allowing an efficient flow of goods. Oversight and responsibilities for port security are divided between numerous actors and can be complex. In October 2005, the National Strategy for Maritime

MaritimeLocated on or near the sea. Commerce or navigation by sea. The maritime industry includes people working for transportation (ship, rail, truck and towboat/barge) companies, freight forwarders and customs brokers; stevedoring companies; labor unions; chandlers; warehouses; ship building and repair firms; importers/exporters; pilot associations, etc. Security was approved by the President. This strategy provides plans that address preparedness, protection, response and recovery for both man-made and natural hazards that might create security concerns at our nation’s ports.