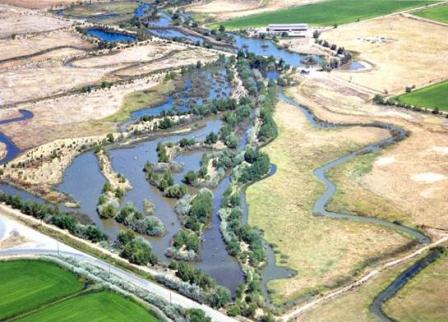 A mitigation bank is a wetland, stream, or other aquatic resource area that has been restored, established, enhanced, or (in certain circumstances) preserved for the purpose of providing compensation for unavoidable impacts to aquatic resources permitted under Section 404 or a similar state or local wetland regulation.1 A mitigation bank may be created when a government agency, corporation, nonprofit organization, or other entity undertakes these activities under a formal agreement with a regulatory agency. Mitigation banks have four distinct components:

The value of a bank is defined in "compensatory mitigation credits." A bank's instrument identifies the number of credits available for sale and requires the use of ecological assessment techniques to certify that those credits provide the required ecological functions. Although most mitigation banks are designed to compensate only for impacts to various wetland types, some banks have been developed to compensate specifically for impacts to streams (i.e., stream mitigation banks). Mitigation banks are a form of "third-party" compensatory mitigation, in which the responsibility for compensatory mitigation implementation and success is assumed by a party other than the permittee. This transfer of liability has been a very attractive feature for Section 404 permit-holders, who would otherwise be responsible for the design, construction, monitoring, ecological success, and long-term protection of the site.

Guidance from U.S. Fish and Wildlife Service (FWS) in 1983 supported the establishment of the first banks, most of which were sites of advanced consolidated compensatory mitigation for impacts planned by state Departments of Transportation or other state agencies.2 The subsequent expansion of mitigation banking was catalyzed by the release of several important reports that challenged the effectiveness of compensatory mitigation practices under the Section 404 program, particularly on-site and single-project off-site compensatory mitigation.3

EPA and the Corps, the primary federal agencies responsible for implementing the federal Section 404 program, began to view banking as a way of addressing these shortcomings of mitigation policy and in response issued interim Banking Guidance in 1993. Mitigation banking programs were well-positioned to address many of these issues by providing for easier monitoring, long-term stewardship, and unambiguous transfer of liability for assuring mitigation success from the permittee to the banker. The promise of regulatory simplification for permit applicants that use a bank to satisfy permit conditions has also spurred activity in mitigation banking. In addition, language supporting the development of banking was included in the White House Office of Environmental Policy's 1993 Federal Wetlands Plan as well as in the Intermodal Surface Transportation Equity Act of 1993.

In November 1995, EPA, the Corps, FWS, National Oceanic and Atmospheric Administration's National Marine Fisheries Service, and U.S. Department of Agriculture's Natural Resources Conservation Service released the final Federal Guidance on the Establishment, Use, and Operation of Mitigation Banks.4 The guidance gave state agencies, local governments, and the private sector the regulatory certainty and procedural framework they needed to move forward on seeking approval to operate mitigation banks. Following its issuance, banks proliferated across the country and became a mainstream compensatory mitigation option.5 With the passage of the Transportation Equity Act for the 21st Century (TEA-21) in 1998, banking became the preferred compensatory mitigation alternative for impacts involving the federal funding of transportation projects.6 Since 1998, conferences have been held annually devoted to sharing and encouraging advances in mitigation banking policy and practice.7

In response to comprehensive and independent critiques of the effectiveness of compensatory mitigation at offsetting impacts to wetlands and other aquatic resources under Section 404, EPA, the Corps, and the Departments of Agriculture, Commerce, Interior, and Transportation released the National Wetlands Mitigation Action Plan on December 26, 2002.9 The Plan includes 17 action items designed to improve the ecological performance and results of all forms of compensatory mitigation, including banking. Approximately half of these 17 action items have been implemented while the remaining items are currently under development.

The Water Resources Development Act (WRDA) of 2007 identifies mitigation banking as the preferred mechanism for offsetting unavoidable wetland impacts associated with Corps Civil Works projects. Section 2036 of the Act states that "In carrying out a water resources project that involves wetlands mitigation and that has impacts that occur within the service area of a mitigation bank, the Secretary [of the Army], where appropriate, shall first consider the use of the mitigation bank if the bank contains sufficient available credits to offset the impact."

In 1992 there were only 46 banks permitted, almost all of which were publicly-sponsored single-user banks, in which entities such as state agencies or large corporations stockpile wetland credits for their own later use. The first entrepreneurial banks to sell credits to any permittee were developed between 1991 and 1994. By the end of 2001, the Environmental Law Institute (ELI) had identified approximately 219 approved wetland mitigation banks nationwide, more than 130 of which were entrepreneurial banks, and 22 of which had sold out of credits. This represented a 376% increase in the number of banks over 10 years, nearly all of which occurred following the release of the 1995 Banking Guidance. An estimated 139,000 acres were included in the 219 approved banks that provide a combination of wetland restoration, creation, enhancement, and/or preservation.

ELI also identified an additional 95 banks under review with approval pending as of December 2001. The 95 banks under review at that time included an additional 8,000 acres. ELI also listed 40 approved "umbrella banks" (i.e., banks developing multiple compensation sites under a single instrument) with approximately 26,848 acres of mitigation wetlands approved at 308 individual sites.13 A 2005 inventory by the Corps' Institute for Water Resources estimates a total of 450 approved mitigation banks (59 of which have sold out of credits) and an additional 198 banks in the proposal stage. Since this survey counted umbrella banks as a single bank, the number of bank sites is likely considerably larger than this estimate. As of August, 2013, there were over 1,800 bank sites loaded into the RIBITS (Regulatory In-lieu fee and Bank Information Tracking System) database.  For the most recent estimates of the number of banks and bank sites across the country query the RIBITS website. Exit

Additionally, banking represents an increasingly important economic component of the environmental consulting sector, showcasing the synergies that can arise between effective environmental protection and economic expansion. Sixty two percent of the banks identified in ELI's 2002 study were privately-owned entrepreneurial mitigation banks; entrepreneurial providers of bank credits have emerged as a nationally-organized industry17 contributing hundreds of millions of dollars annually to the domestic product.

EPA looks forward to working with the Corps and our other partners on continuing to improve mitigation banking's effectiveness at offsetting authorized impacts to wetlands, streams, and other aquatic resources. Improving IRT training, increasing mitigation bank tracking and monitoring, and expanding the evaluation of bank performance are a few of the areas the EPA plans to focus on in the coming years.