Top ranking applicants receive the 2015 national data driven award in each of the target areas of Waste, Electronics, Purchasing, Water, Energy and Transportation based on their 2014 improvements.

Virgin xylene usage decreased by nearly 50 percent with the installation of a new “smart” processor in histology that alerts employees when individual fluids are contaminated and must be replaced, rather than requiring a set bi-weekly change-out of all chemicals in the machine. Large increases in the numbers of pallets and plastic barrels recycled were achieved through the implementation of employee education programs. 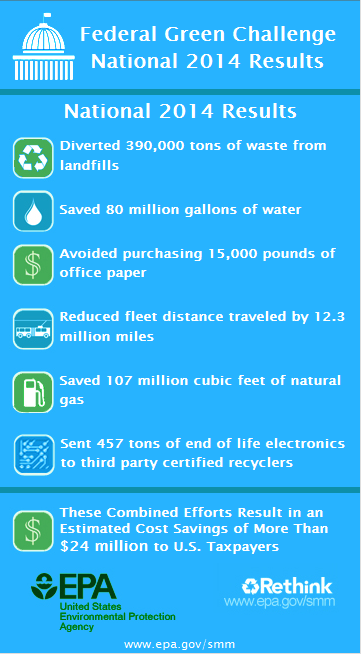 Find out more about Federal Green Challenge National results for 2014 and earlier years. | Return to All 2015 Awardees

GSA's U.S. Courthouse increased their purchase of green cleaning products by 60 percent from 2013 to 2014, the result of strengthened requirements in their new custodial services contract. The change reduced the use of harmful cleaning materials in the facility without impacting the overall quality of the cleaning service. Furthermore, GSA took proactive steps to reduce its paper consumption by removing personal printers and encouraging employees to print double-sided, and only when necessary. The result was a 6.25 percent decrease in paper usage. This facility uses paper that has 75 percent post-consumer recycled content. 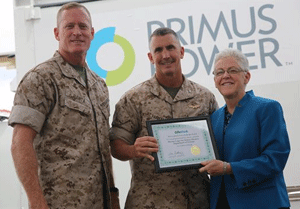 In 2014, Marine Corps Air Station Miramar cut its fuel oil consumption by 98 percent over the previous year. This resulted from the build out of a new aircraft hangar which brought a new natural gas system to the installation, thus eliminating the need for the old diesel fuel system. Consequently, the Air Station will convert the rest of the propane systems to natural gas in the future. These measures help improve local air quality while saving on utility expenses. Furthermore, the Air Station reduced its natural gas consumption by 7 percent due to the energy optimization strategies built into the direct digital boiler controls, which curtailed unnecessary boiler operation during the unseasonably warmer winter months of 2013-14, where the systems were effectively secured until conditions required operation.
News release

The Oregon Caves National Monument and Preserve is located in the northern Siskiyou Mountains of Southwestern Oregon. The National Park Service staff who manage the park work hard to improve sustainability and reduce resource use. They now have an active recycling program, replaced much of the park lighting with LED lamps and are continuing to reduce water usage. The large reduction in water use can be attributed to more efficient water treatment procedures; much less water is being used to maintain proper chlorine levels in the water system. Additionally, some small plumbing leaks have been addressed, and overall, park employees have reduced water use in daily operations.

National Renewable Energy Laboratory (NREL) in Golden, CO is focused on reducing its environmental impact. NREL was successful in its accomplishment by eliminating internal combustion vehicles on it campus, increased support of employees' use of public transit, increased use of bicycles in and around campus, and increased amount of telework by staff.

An ecologically-minded grounds crew at the Minneapolis Veterans Administration Medical Center reduced the facility’s environmental impact in 2014. At 245 acres, with 40 acres of parking lots and 51 buildings, the grounds’ vehicle manager determined his department needed to acquire, then increase, the number of short-haul electric vehicles for the myriad of day-to-day tasks required by grounds operations. Staff learned the process for acquiring discarded and abandoned vehicles through GSA’s federal excess property system process and was able to repair and repurpose these vehicles at minimal cost to the VA. This initiative was truly a grass-roots effort by environmentally conscious staff leading to an outstanding outcome for the facility and the VA.

Capulin Volcano National Monument increased their vehicle fleet by purchasing two alternative fuel vehicles, in an effort to minimize the environmental effects of vehicle travel. Capulin has made significant improvements as an active Federal Green Challenge participant since 2013. They won their first Innovation Award last year for creating a recycling hub at their facility for adjacent communities. This enabled the Monument to increase the amount of materials diverted from landfills, and provided opportunities to educate their neighbors.