Fluorinated Greenhouse Gas Emissions and Supplies Reported to the GHGRP

The reported emissions exclude biogenic CO2. GHG data displayed here in units of carbon dioxide equivalent (CO2e) reflect the global warming potential (GWP) values from Table A-1 Exit, which is generally based on the IPCC’s Fourth Assessment Report (AR4) Exit, with the addition of GWPs from the IPCC’s Fifth Assessment Report for fluorinated GHGs that did not have GWPs in the AR4.

Fluorinated greenhouse gases (F-GHGs) include the most potent and longest lasting greenhouse gases emitted by human activities. The Greenhouse Gas Reporting Program (GHGRP) covers emissions of these compounds by requiring specific facilities that emit significant quantities of these compounds to report their annual emissions. These emitters include producers of fluorinated gases (F-gases) and other emitters of F-GHGs. The GHGRP also requires companies that supply these compounds (i.e. producers, importers and exporters) to report the quantity of each gas supplied each year. This page contains information about supplies and emissions of F-gases and presents summary data and graphics. For more general information about fluorinated greenhouse gases, please visit the Overview of Greenhouse Gases page.

Overview of Suppliers and Emitters of Fluorinated GHGs

The following diagram illustrates the types of facilities required to report fluorinated greenhouse gas data to the GHGRP. 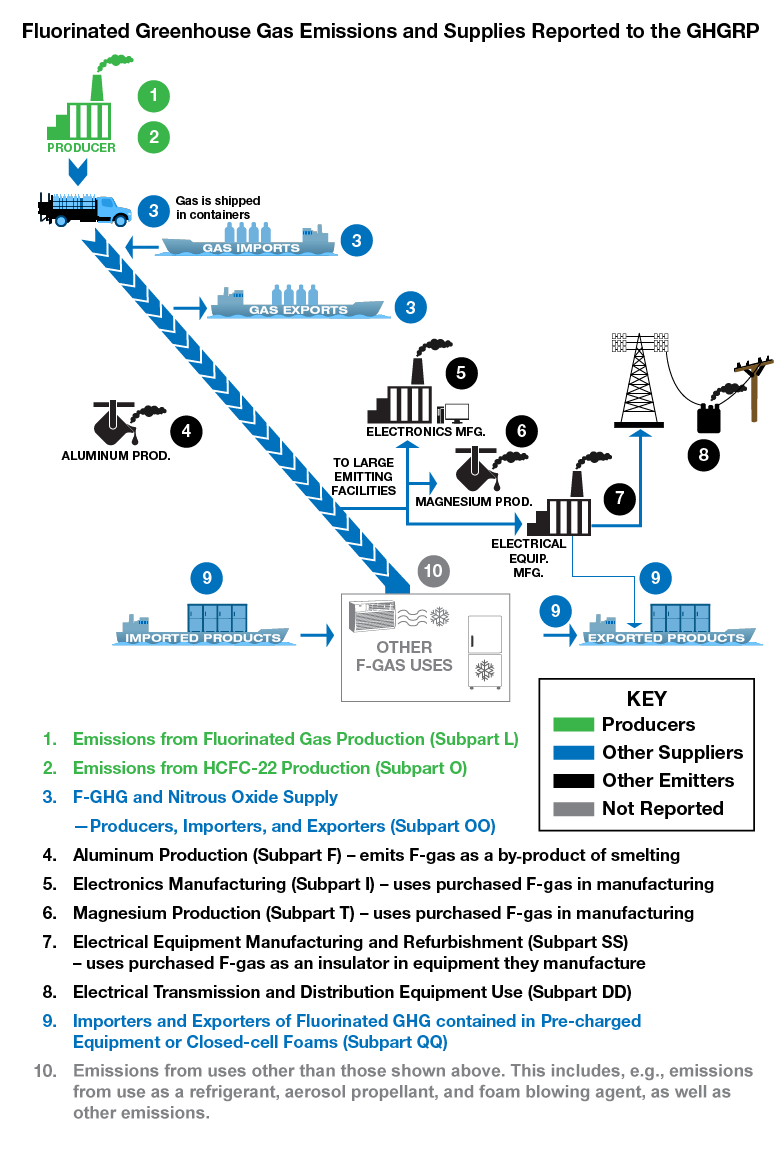 Suppliers of GHGs include producers, importers, and exporters of industrial gases (including F-GHGs) and importers and exporters of F-GHGs in pre-charged equipment (e.g. air conditioners, circuit breakers) and closed-cell foams. All producers must report. Additionally, companies that import or export 25,000 metric tons CO2e or more of F-GHGs, N2O and CO2 per year, either in bulk or in pre-charged equipment and closed-cell foams, must report their imports and exports. The chart below presents a summary of the net supply of F-GHGs, using data reported under Subpart OO and Subpart QQ. The "net supply" or "net CO2e" means the CO2e quantities of bulk gas produced + imported – exported – transformed – destroyed.

Facilities with F-gas production processes must report to the GHGRP if their emissions, in the absence of controls, would equal 25,000 metric tons CO2e per year or more, with one exception: any facility that produces hydrochlorofluorocarbon (HCFC)-22 must report if the production process generates hydrofluorocarbon (HFC)-23 as a byproduct. In addition, facilities that operate devices to destroy more than 2.14 metric tons of HFC-23 annually must report. (Note that production facilities, like other facilities reporting to the GHGRP, can cease reporting if their emissions or supplies consistently fall below certain levels for certain numbers of years. Please see the Subpart A Information Sheet or this FAQ page. )

HFCs are primarily used as refrigerants, foam-blowing agents, aerosol propellants, solvents and fire suppressants.[*] HFCs, among other compounds, are substitutes for chemicals that deplete the Earth’s protective ozone layer (e.g., chlorofluorocarbons (CFCs), HCFCs and halons). These ozone-depleting chemicals are not reported under the GHGRP but are covered by EPA regulations at 40 CFR Part 82 (see https://19january2021snapshot.epa.gov/ozone-layer-protection).

[*] One exception is HFC-23, which is primarily emitted as an unintentional byproduct from the production of HCFC-22 and other F-GHGs.

Other Emissions of Fluorinated GHGs

The chart below shows the quantity of each type of fluorinated greenhouse gas reported by each industry that reports direct emissions and the number of reporters in that industry, excluding F-gas producers (discussed above). It includes data reported under Subpart F, Subpart I, Subpart T, Subpart DD, and Subpart SS.

For 2019, reported fluorinated greenhouse gas emissions from these other emitters were about 9.7 million metric tons of carbon dioxide equivalent (MMT CO2e).1

View trends in reported emissions in the electronics manufacturing, electrical equipment production and use, and metals manufacturing sectors.