What is a Financial Power Purchase Agreement (Financial PPA)?

A financial PPA (Financial PPA) is a financial arrangement between a renewable electricity generator (the seller) and a customer, that enables both parties to hedge against electricity market price volatility. Unlike with a physical power purchase agreement (PPPA), there is no physical delivery of power from the seller to the customer. Rather, it is a hedge arrangement that offers buyers cost predictability for their electricity use and promotes growth in the renewable energy sector by offering project developers long-term contracts with predictable revenues — a key element to attracting project financing and investment. Financial PPAs are also sometimes known as virtual or synthetic PPAs, a contract for differences, or a fixed-for-floating swap. Financial PPAs are an innovative and useful procurement option for organizations, particularly those in traditionally regulated electricity markets that generally do not permit PPPAs.

How do Financial PPAs work?

In an Financial PPA, the seller and customer agree to a "strike price" per kilowatt-hour that the seller will receive for its delivery of null electricity into the wholesale market. Thereafter, any monetary difference between the strike price and wholesale market price is exchanged between the two parties, such that the seller in net always receives the strike price for its sales of electricity. The renewable energy certificates (RECs) generated by the renewable electricity generator are usually contractually conveyed to the customer in the Financial PPA. The RECs entitle the customer to exclusive rights to make claims about using the green power produced by the generator and the associated reductions in scope 2 emissions. No electricity is physically conveyed from the generator to the customer, however.

Since RECs are treated differently in each Financial PPA, it is important that the customer understand REC ownership in their particular contract. The project's RECs may not be conveyed to the customer and are instead sold by the project owner into the compliance market. To make claims about using green power from the PPA, the customer must own the associated project RECs. Alternatively, the seller may use REC arbitrage to provide the customer with replacement RECs from another renewable energy project, but the customer's green power use claims need to align with the attributes of the replacement RECs. Learn more about the process of REC Arbitrage. 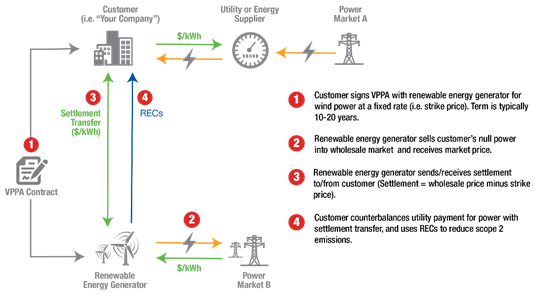 Why would an organization consider an Financial PPA?

Organizations likely to use a Financial PPA have:

What is the difference between a Physical PPA and a Financial PPA?

Advantages and Challenges of Financial PPAs

What type of organizations can do Financial PPAs?

Creditworthy organizations with large electricity loads can use Financial PPAs to hedge their electricity costs in exchange for providing guaranteed offtake to a renewable energy generator. Organizations engaged in a Financial PPA can be located anywhere in the U.S., including being located in a traditionally regulated electricity market.

What are some organizations that are using Financial PPAs?

In 2014, Mars, Incorporated signed an Financial PPA with the 118-turbine Mesquite Creek Wind Farm in Texas, which covers an area as large as Paris, France. This agreement provides enough RECs to cover 100% of Mars' U.S. operations. In 2015, Microsoft signed two different 20-year Financial PPAs, one with Enbridge's Keechi Wind Farm in Texas for about 450 million kWh of electricity, and another with EDF Renewable Energy's Pilot Hill Wind Project in Illinois for about 430 million kWh.1