The Pennsylvania Department of Environmental Protection (PADEP) took a multitude of steps to investigate and protect drinking water resources in response to complaints, including entering into a Consent Order Agreement with the company to replace impacted water supplies and remediate gas wells, fining the operator for gas migration, and overseeing a Corrective Action Plan to evaluate the mechanical integrity of area gas wells. PADEP continues to monitor the situation and have provided alternate drinking water when necessary. They also issued four notices of violation relating to releases and contamination at a pond, which was not being used as a drinking water source, and issued one Consent Assessment of Civil Penalty to date.

EPA completed three rounds of water sampling from October 2011 to May 2013 from domestic wells, springs, and surface water locations. Sampling locations were selected primarily based on homeowner-specific concerns and complaints regarding potential adverse impacts on their well water from drilling and/or other processes related to hydraulic fracturing. 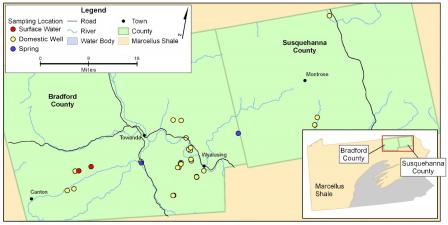