For Maryland Town, the Answer is Blowing in the Wind

The four main sections of a wind turbine that will rise 300 feet have been delivered to the site of Crisfield, Maryland’s wastewater treatment plant. It’s expected that by June, the rotor blades will be whirring and the turbine will produce enough green energy to power the plant – and then some.

For a small, economically disadvantaged city like Crisfield, where the wastewater treatment plant accounts for more than half of the city’s electric bill, the wind power will mean big savings – between $140,000 and $165,000 a year – and a boon to the environment.

“This is a substantial difference maker in our community,” says the city’s new mayor, Kim Lawson.

EPA’s CWSRF is the source of most of the funding for the project. EPA’s Mid-Atlantic Water Protection Division approved Maryland’s CWSRF Exit plan that included $3.17 million in “loan principal forgiveness” and $453,000 in low-interest loans for the alternative energy project.

Crisfield’s location at the lower end of Maryland’s Eastern Shore, surrounded by water on three sides, will allow the 750 kilowatt wind turbine to use the strong, unobstructed winds off Chesapeake Bay’s Tangier Sound to power the plant.

Any excess power spun by the turbine blades will be sold back to the utility supplier. In all, the city expects to save more than $200,000 a year. The switch to wind power at the plant is also expected to reduce greenhouse gases by an estimated 765 metric tons per year. 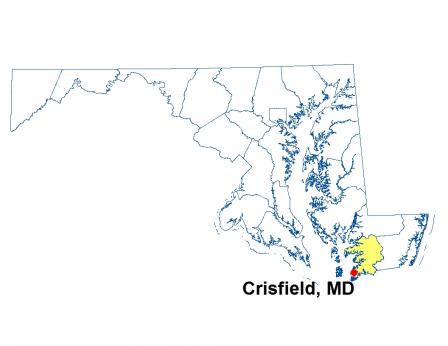