Environmental Challenges for the Merrimack River

Stormwater runoff is generated from rain and snowmelt that flow over land or impervious surfaces, such as paved streets, parking lots and building rooftops, and does not soak into the ground. The runoff picks up pollutants like trash, chemicals, oils, and dirt/sediment that can harm our rivers, streams, lakes, and coastal waters.

Water that is discharged from municipal separate storm sewer system are regulated under the NPDES Storm Water Program Municipal Separate Sanitary Stormwater (MS4) Permit. There are also opportunities to use green infrastructure approaches, which use natural processes to improve water quality by managing water at its source.

Information about green infrastructure can be found:

Stormwater runoff occurs when precipitation from rain or snowmelt flows over the ground. Impervious surfaces like driveways, sidewalks, and streets prevent stormwater runoff from naturally soaking into the ground. Stormwater can pick up sediments, oil, nutrients like phosphorus and nitrogen that can cause algae, debris, chemicals, dirt, and other pollutants, which flow into a storm sewer system or directly to a lake, stream, river, wetland, or coastal water. Anything that enters a storm sewer system is discharged untreated into the waterbodies we use for swimming, fishing and sometimes drinking water. Pet waste can be a major source of bacteria and excess nutrients in local waters.

For more information on Stormwater Challenges.

Reducing high levels of bacteria in the Merrimack River is a top priority.

The primary source of bacteria pollution to the Merrimack River is untreated sewage. The solution is expensive: cities and towns in the watershed must spend hundreds of millions of dollars in municipal wastewater infrastructure improvements to assure that sanitary sewer systems capture and fully treat all sewage before discharge. Many communities on the Merrimack River are working to find and remove illicit connections of sewers to storm drains. In addition, six sanitary sewer systems (all of them located above drinking water intakes) have very old combined sewers which discharge untreated sewage during wet weather.

Elevated bacteria levels are primarily caused by the following sources:

Nutrients, primarily phosphorus, are a chief culprit for dramatic algae blooms that plague the River with blue-green algae during the summer months.

These "blue green" algae blooms, are a form of bacteria known as Cyanobacteria, whose cells may release a toxin when they die. Exposure to the toxin can cause skin rashes and irritate the nose, eyes or throat, and if ingested can lead to serious liver and nervous system damage. Other harmful effects of the algae include reduced water clarity, nuisance scum, and reduced oxygen in the water which is necessary for a healthy fish habitat.

For more information on Nutrient Challenges. 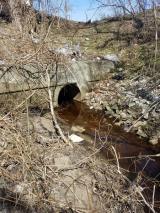 Over the last few years, EPA Region 1 has been conducting sampling of storm water pipes discharging into the Merrimack River and its tributaries. The samples are analyzed for bacteria as well as a suite of pharmaceutical compounds, high levels of which point to an illicit cross connection between sanitary sewers and storm drains.

Litter and trash in water ways is a significant concern in some sections of the Merrimack River. Lawrence community stakeholders identified litter and trash as one of their top priorities.

EPA's Trash-Free Waters program is reducing the volume of trash entering U.S. waterways. Common trash from consumer goods makes up the majority of what eventually becomes marine debris, polluting our waterways and oceans. Plastics in the aquatic environment are of increasing concern because of their persistence and effect on the environment, wildlife, and human health.

The Clean River Project is how one of the partners is addressing litter in the Merrimack River.

CSOs occur when wastewater containing untreated human waste, industrial waste and other debris is carried through the stormwater pipes and discharged into the River. Many sewer systems originally were designed to carry sewage and stormwater in the same pipe to a sewage treatment plant. After heavy rainfall or snowmelt, however, the wastewater volume can be more than the sewer system or treatment plant can handle. For this reason, combined sewer systems were designed to have safety valves that allow overflow after rain events, which results in wastewater being discharged directly into the river.

CSOs on the Merrimack

Six sanitary sewer systems discharge untreated sewage into the Merrimack River Watershed during wet weather because portions of the system carry combined sanitary and storm flow. All six of these systems have entered into enforcement agreements with the U.S. EPA to eliminate their combined sewer overflows through extensive infrastructure investment.  Additional information on each of the communities’ CSO programs can be found on their web pages.