On this page:
On related pages:

Coordination with States and Tribes

EPA Region 1 coordinated with the states, tribal governments and the Northeast States for Coordinated Air Use Management (NESCAUM) Air Toxics and Public Health Committee to review the results of NATA and quality assure the data prior to releasing the data to the public. The results of the NATA are dependent on this close, cooperative interaction to develop and refine the 2014 air toxics inventory.

There are other air toxics including arsenic, ethylene oxide, hexavalent chromium, naphthalene, and trichloroethylene for which census tract risk values in New England exceeded a cancer risk level of 1 in 1 million.  These may be a potential concern at the local level rather than the regional level.  There are also other air toxic pollutants, including asbestos, dioxin, lead, mercury, PCBs and radon, that are also a concern due to other routes of exposure or exposure from indoor sources and these continue to be a focus of our actions.

The following Table includes information on the emissions sources, and health effects for the air toxics of greatest concern in New England.

You may need a PDF reader to view some of the files on this page. See EPA's PDF page to learn more about PDF, and for a link to the free Acrobat Reader.

The following map represents a summation of carcinogenic risk estimates in New England for inhalation exposure to air toxics modeled in the 2014 National Air Toxic Assessment. The risk estimates in the map are based on the census tract level average of a typical individual's exposure.

The following limitations to these carcinogenic risk estimates for exposure to these air toxics must be noted: the inhalation route of exposure is the only exposure route that has been evaluated, only inventoried outdoor air toxic sources were used in this assessment since there isn't adequate data on indoor air exposures, and the risks associated with each carcinogenic pollutant are only added together since there is inadequate information on other health effect interactions.

These carcinogenic risk estimates can not be related to an individual's risk of cancer because the estimates are restricted to 2014 estimates and the results should be reviewed across broad geographic areas such as counties and states. These risk estimate maps should not be used to obtain information on specific types of cancers or possible cancer clusters but they can provide EPA, the states and the public with information on whether we're focusing on the right pollutants and sources to protect the public health. 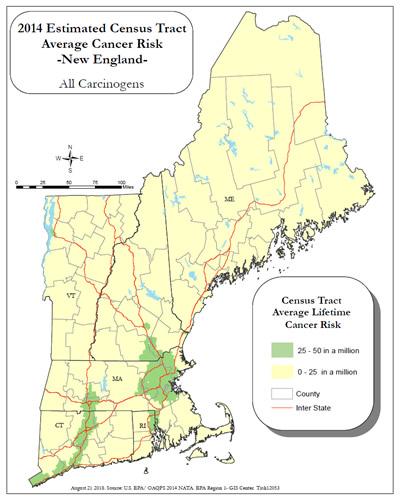 For general information about other EPA programs, contact:
The EPA New England call center at (617) 918-1111