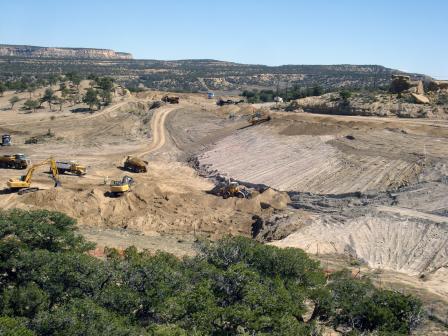 Overlooking the NECR Mine facing Northeast | Click to EnlargeThe Northeast Church Rock Mine (NECR) is a former uranium mine located at the northern end of State Highway 566 approximately 17 miles northeast of Gallup, NM in the Pinedale Chapter of the Navajo Nation. EPA is working with the Navajo Nation Environmental Protection Agency (NNEPA) to oversee cleanup work being done by the United Nuclear Corporation (UNC), a company owned by General Electric (GE).

United Nuclear Corporation (UNC) operated NECR from 1967 to 1982. During this time, they extracted approximately 3.5 million tons of ore, making this the second highest producing mine on the Navajo Nation behind the Kermac Mine No. 22 in the Ambrosia Lake Area. While the mine was in operation, the New Mexico Mining and Minerals Division regulated the site. The uranium ore body is located up to 1,800 feet below grade at the NECR Mine Site. Therefore, the mining was conducted over 1,000 feet below the ground surface accessed through two main underground shafts. Other mining features included several vent holes, support buildings, roads and water extraction wells and treatment facilities. Portions of the site are located within an arroyo. Uranium ore from the UNC mine was processed at the adjacent UNC Mill Site, located on private property across Highway 566.

To address contamination that had migrated off the NECR Mine Site into the adjacent residential area, EPA, in partnership with NNEPA, has overseen several time-critical actions where UNC removed approximately 200,000 tons of contaminated soil. This soil was brought back to the mine site waste pile which was regraded, covered, and vegetated to stabilize the contamination during the long planning process for the much larger cleanup of approximately 1.4 million tons of contaminated soil on the NECR Mine Site. EPA provides voluntary alternative housing for nearby residents during construction activities.

The cleanup plan for NECR includes moving approximately 1.4 million tons of contaminated soil to the nearby UNC Mill Site. This construction activity, including construction of a repository, or holding cell at the UNC/GE Site requires a lot of planning that takes place during the design phase of the project.

A design review team has been formed to coordinate the review process among the various federal, state, and tribal agencies. The design review team consists of EPA Regions 6 and 9, the Nuclear Regulatory Commission, NNEPA, New Mexico Environmental Department (regulatory agencies), and the Department of Energy. The team also includes a representative from the community assisted by a technical support representative from the Technical Assistance Services for Communities contract administered by EPA.

The design of the NECR cleanup was completed in 2018 and approved by USEPA for submission to the Nuclear Regulatory Commission as part of a license amendment request.

The main purpose of engaging community members is to give them the opportunity to become involved in EPA’s activities and also help shape the decisions that are made that affect their community. To further this goal, EPA has developed a Community Involvement Plan which describes the various ongoing outreach activities.

Who Is the Community?

To keep the community informed, EPA continues to:

EPA recently completed the following activities in the community:

EPA continues to work and strengthen relationship with a number of organizations focused on uranium and radiation, including:
Top of Page 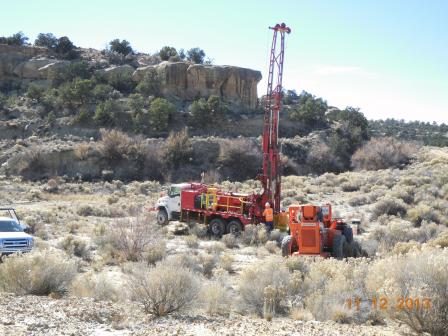 NECR Typical Hollow Stem Auger Drilling | Click to EnlargeNortheast Church Rock Mine was operated by United Nuclear Corporation (a company owned by General Electric) from 1967 to 1982. Click on the different years below to learn about recent and upcoming activities.

NECR cleanup plan was in design.

UNC/GE finalized the design and submitted a license amendment request to the Nuclear Regulatory Commission.