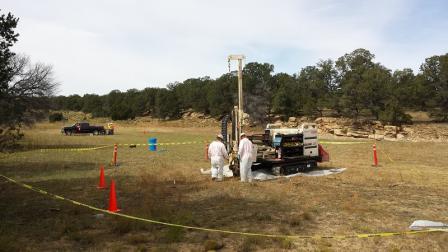 Taking soil samples below the surface at Ruby #3Ruby #1 and Ruby #3 are located in the Smith Lake Chapter of the Navajo Nation, approximately 30 miles east of Gallup, NM. EPA is working with NNEPA to oversee investigation and cleanup work being done by Western Nuclear, Inc., which was the company that operated the mines.

The Ruby Mines #1-4 were operated between September 1975 and February 1985 by Western Nuclear, Inc. The four mines were next to each other and mined by underground methods. Total ore production from the four mines is estimated at approximately one-million tons. Ore from Ruby Mines #2 and #4 were transported through Ruby Mines #1 and #3, respectively. Ore from the mines was transported offsite for processing. Waste rock from mining operations was placed outside the adits of Ruby Mines # 1 and #3.

Western Nuclear, Inc. completed reclamation efforts at the Ruby Mines in 1985 by covering the waste rock with clean soil under the direction of the Bureau of Land Management (BLM) and the Bureau of Indian Affairs (BIA).

Western Nuclear investigated the mines by sampling soils on the surface and under the ground and by scanning with a radiation detector. The two mines have approximately 200,000 cubic yards of mine waste containing radium and uranium at levels that could pose a health risk. The mine waste is primarily buried in the waste piles at the sites, with very little waste scattered outside of the piles.

EPA will work with Navajo Nation Environmental Protection Agency (NNEPA), Western Nuclear, Inc. (the company responsible for the mining operations and cleanup) and the community to evaluate potential options to address the hazards posed by the mine waste. The evaluation will be presented in a report called the Engineering Evaluation/Cost Analysis (EE/CA).

Residents of the Smith Lake Chapter and other surrounding areas, have a say in what EPA is doing in their community.  EPA works with community members and gives them the opportunity to become involved in EPA’s activities and help shape decisions made that affect their community.

Who is the Community?

EPA works with Smith Lake chapter officials as well as community members for all outreach activities and information sessions. To keep the community informed, EPA:

EPA completed the following activities in the community:

EPA conducts its work in close coordination with the Smith Lake community, Navajo agencies and educational institutions, as well as other federal agencies.

The mines were operated between 1975 and 1985. Western Nuclear consolidated the waste material into piles at the two mine sites and placed a soil cover over the waste and then revegetated the areas in 1985. This process is called reclamation.

Several open mine adits and vent holes at the two mine sites were closed in 2014 and 2015. Photographs are of the adit and the vent hole before and after closure.

EPA plans to oversee Western Nuclear Inc., and work with NNEPA and the community to evaluate potential options to address the mine sites.

Photographs related to the abandoned uranium mine cleanup work near Ruby Mines in the Smith Lake Chapter of the Navajo Nation, approximately 30 miles east of Gallup, NM.