In 1977, EPA issued a general permit under the Marine Protection, Research and Sanctuaries Act (MPRSA) to the U.S. Navy for the transport for ocean disposal of target vessels used in the U.S. Navy’s Sink Exercise (SINKEX) Program.

Why is this permit needed?

The SINKEX Program uses ex-Navy vessels as targets for at-sea live-fire exercises. The United States views these exercises as essential for training personnel and testing military equipment. Ex-vessels used in SINKEX are not recovered after sinking in deep ocean waters. The general permit authorizes the U.S. Navy to transport target vessels from the United States (or from any other location) for the purpose of sinking such 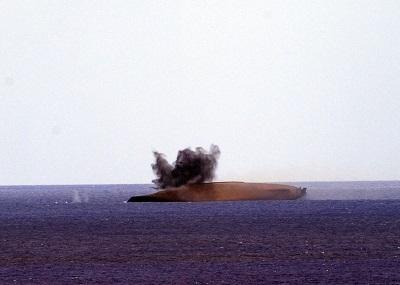 Navy's ex-Acadia being used for SINKEX.
vessels in deep ocean waters to test ordnance and provide related data.
Because the target vessels remain on the ocean floor after sinking, there are permit requirements that apply to the Navy’s preparation of vessels and sinking locations.

What are the permit requirements?

The U.S. Navy prepares vessels for SINKEX in accordance with the MPRSA general permit at 40 CFR 229.2, including as interpreted in a subsequent document captioned “Determination by EPA and Agreement between Navy and EPA” (January 2014). The MPRSA general permit for the transport of target vessels (SINKEX permit) requires that:

What does the 2014 Determination and Agreement say?

The January 2014 document clarifies EPA’s interpretation of the MPRSA permit, identifies Navy’s specific agreements related to SINKEX vessel preparation and removal of materials that may contain polychlorinated biphenyls (PCBs), and enhances reporting to improve confidence, accountability, and transparency in verifying PCB removal from SINKEX vessels prior to sinking. The clarifications are important because PCBs may be present in certain solid materials on the older vessels used in SINKEX. Potential shipboard materials that could contain PCBs include, but are not limited to, bulkhead insulation, wire and cable insulations, and felt and rubber gaskets.

Determination and Agreement between Navy and EPA