Particle Pollution and Your Patients' Health

Why is particle pollution a cardiovascular health concern?

Your patients with cardiovascular disease, including those who have angina, heart failure, particular arrhythmias, or that have risk factors for heart disease (e.g., those who are smokers, obese, or older adults) may be at greater risk of having an adverse cardiovascular event from exposure to fine particles. Unlike some risk factors that contribute to cardiovascular morbidity and mortality, people can take steps to reduce their exposure to particle pollution. Ninety-two percent of patients with cardiovascular disease are not informed of health risks related to air pollution (Nowka et al., 2011). Reducing population exposure to fine particle pollution has been shown to be associated with decreases in cardiovascular mortality (even within a few years of reduced exposure) (Pope et al., 2009; Correia et al., 2013).

How does particle pollution affect the cardiovascular system?

Oxidative stress is an underlying effect due to particle exposure that has been shown to impact endothelial function, pro-thrombotic processes, cardiac electrophysiology, and lipid metabolism.

The pathways by which inhaled particle pollution affects cardiovascular health are detailed in Figure 6. Inhaled particle pollution reaches the alveoli, at which point it can increase the formation of reactive oxygen species (ROS) and initiate an inflammatory response. Alveolar macrophages are likely to release pro-inflammatory cytokines with secondary effects on vascular control, heart rate variability, contractility, and rhythm. Alternatively, following deposition, small amounts (<1% ) of ultrafine insoluble particles, or more soluble components of any size particles (e.g., metals), may translocate from the lung directly into the circulation where the particle might have direct impact on cardiovascular function and/or have direct effects on the central nervous system with secondary effects on the heart and blood vessels via the autonomic nervous system. 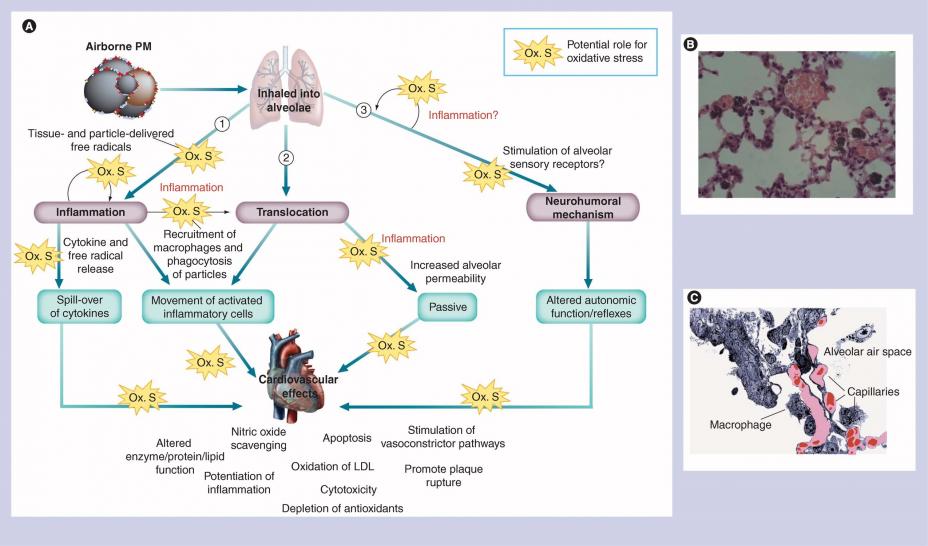 Figure 6. Three possible mechanisms accounting for cardiovascular effects associated with particle pollution exposure. (1) Particles induce an inflammatory response in the lungs, leading to release of cytokines and other mediators that ‘spill-over’ into the systemic circulation. (2) Some ultrafine particles can translocate from the alveolus into the circulation and then interact directly with the heart and vasculature with or without the participation of inflammatory cells. (3) Particles might activate pulmonary sensory receptors and modulate the autonomic nervous system. Oxidative stress could play a role in exacerbating the stages of each pathway, as well as promoting interactions between pathways (e.g., in conjunction with inflammation).  Reprinted with permission from Future Medicine Ltd. (Miller MR, Shaw CA, Langrish JP. 2012. From particles to patients: oxidative stress and the cardiovascular effects of air pollution. Future Cardiology 8(4):577-602).

Studies using concentrated air particles provide important insights into the effects of exposure to particle pollution on cardiovascular endpoints in healthy adults. Ghio and colleagues studied the effects of either filtered air or particles concentrated from the immediate environment (averaging 120 µg/m3). After two hours of exposure, subjects underwent bronchoscopy and assessment of evidence of systemic inflammation. Exposure to fine particles produced no cardiopulmonary symptoms, yet bronchoalveolar lavage showed a mild increase in neutrophils in both the bronchial and alveolar fractions, and fibrinogen was increased the next day (Ghio et al., 2000).

What are the cardiovascular effects?

Acute and chronic exposure to fine particle pollution has been shown to increase the risk of hospitalizations for cardiovascular conditions and mortality. However, multi-city epidemiologic studies of mortality and hospital admissions have provided evidence of regional heterogeneity in risk estimates (Dominici et al., 2006; Zanobetti and Schwartz, 2009). It has often been hypothesized that the regional heterogeneity observed in epidemiologic studies may be a reflection of a number of factors including different sources and the chemical composition of fine particles varying between cities and regions, as well as demographic or exposure differences. To date, the underlying factors that contribute to this heterogeneity have yet to be identified.

Such effects can be measured after acute exposure, and there is accumulating evidence that chronic exposure accelerates atherosclerosis and reduces life expectancy.

What are the acute exposure effects?

Several studies indicate that filtering particles from the air either prevents or decreases particle-induced changes in physiological and biochemical determinants of heart and vascular health (Bräuner et al., 2008; Langrish et al., 2012). However, the clinical benefit of particle filters is not yet established.

Arrhythmias: An increase in ventricular and supraventricular arrhythmias in persons with ICDs (indicated by an increase in the discharge of the ICD) has been positively associated with increases in fine particle concentrations, which is supported by evidence of a linear exposure response (Peters et al., 2000; Rich et al., 2005; Dockery et al., 2005; Link et al., 2013). Stronger associations were found between air pollution and ventricular arrhythmias for episodes within a few days of a previous arrhythmia, suggesting that arrhythmias were triggered by air pollution episodes in combination with other factors that increased the patient’s susceptibility to arrhythmia.

Atrial fibrillation is the most common clinically important arrhythmia in older persons and imposes both a large societal burden and economic burden on the health-care system because of decreased quality of life, functional status, and hospitalizations for rhythm management, heart failure, and stroke (Rich et al., 2006).

Stroke: Some studies have reported evidence of an increase in hospitalizations for stroke due to increases in the concentration of ambient fine particles (Wellenius et al., 2012). Recent meta-analyses have provided additional evidence supporting a relationship between both acute and chronic exposures to fine particles and various types of stroke (Shin et al., 2014; Shah et al., 2015). The mechanism for the increase in strokes is not known, but one study found a relatively small but independent effect of higher air temperature, dry air, upper respiratory tract infections, grass pollen, SO2, and suspended particles (Low et al., 2006).

Plaque stability and thrombus formation: Modulation of plaque stability and thrombus formation associated with fine particle exposure is suggested by epidemiological data indicating that the risk of unstable angina and myocardial infarction may increase by as much as 4.5 percent for each 10 µg/m3 increase in 24-hour average fine particle concentrations (Pope et al., 2006).

What are the chronic exposure effects?

There is accumulating evidence that risk from chronic exposure (months to years) to inhaled fine particles accelerates atherosclerosis and reduces life expectancy.

The Harvard Six Cities Study found statistically significant associations between chronic exposure to air pollution and mortality (Figure 7), specifically for fine particles and other pollutants strongly correlated with fine particles. Air pollution was also positively associated with cardiopulmonary disease deaths. A follow-up study (Laden et al., 2006) assessing risk of death after considerable improvement in air quality in these six cities showed that the risk of mortality diminished in proportion to the reduction in air pollution. As shown in Figure 8, the mortality rate ratio decreased in each city as air quality improved. 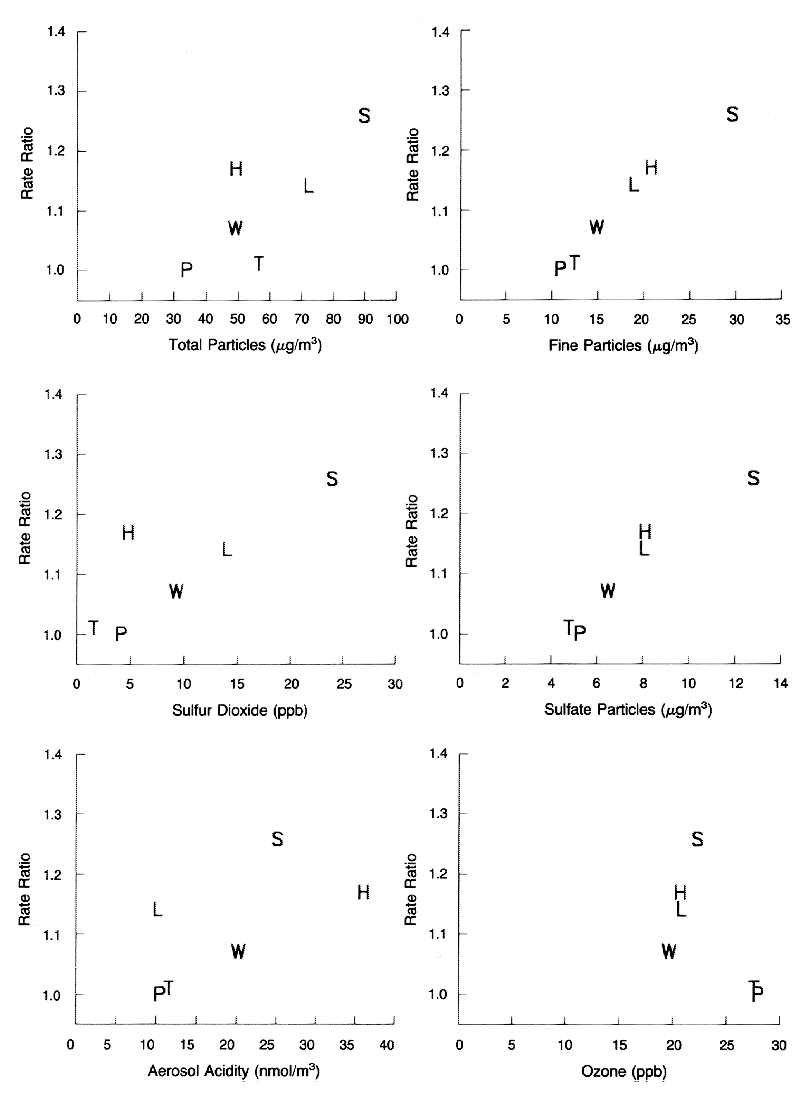 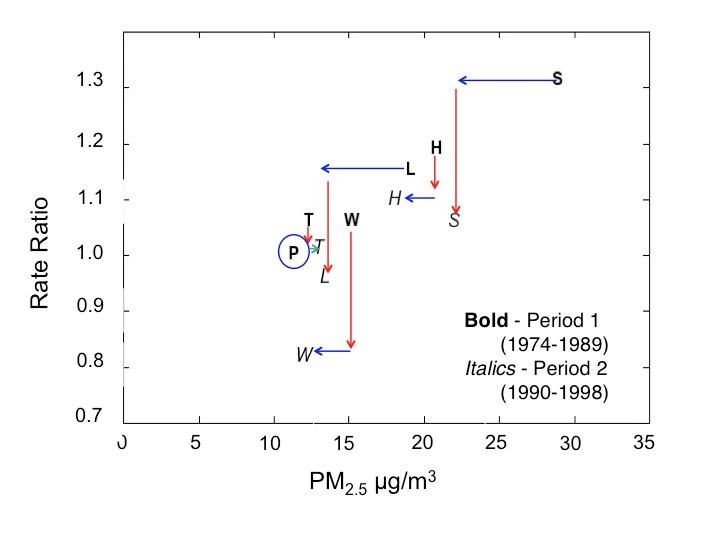 The American Cancer Society’s Cancer Prevention II Study also assessed the relationship between chronic exposure to fine particle pollution and mortality, but on a national scale (Pope et al., 2002). Similar to the Harvard Six Cities study, the ACS study reported evidence of a positive association between both all-cause and cardiopulmonary mortality and chronic exposure to fine particles.

PM and Your Patients' Health