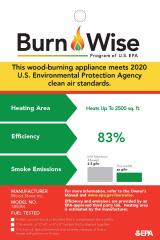 This final action helps ensure that, in the future, customers buying wood heaters anywhere in the United States will be able to choose from cleaner-burning models. Today’s actions do not apply to wood heaters that are currently in use in people’s homes, or to fireplaces, backyard barbecues, chimineas, or fire pits.

EPA continues to work with states, industry and other stakeholders to more accurately account for air emissions from wood burning devices.  Since the 2015 rule was issued, EPA believes that current testing requirements may lead wood heater manufacturers to design appliances that do not reflect their actual use – and that may not achieve the environmental benefits contemplated in the rule. The 2015 rule is based on tests that burn standardized configurations of lumber, rather than tests that burn logs – the type of wood a typical homeowner would burn for heat.  EPA is conducting a series of discussions with key stakeholders about improving the air emissions testing and operational procedures for these devices.