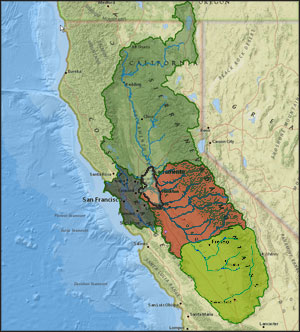 The San Francisco Bay Delta watershed covers more than 75,000 square miles and includes the largest estuary on the west coasts of North and South America. It also contains the only inland delta in the world.

The watershed extends nearly 500 miles from the Cascade Range in the north to the Tehachapi Mountains in the south, and is bounded by the Sierra Mountain Range to the east and the Coast Range to the west. Nearly half of the surface water in California starts as rain or snow that falls within the watershed and flows downstream to the Pacific Ocean through the Golden Gate Strait.

In addition, the watershed provides a primary source of drinking water for 25 million Californians, irrigation for 7000 square miles of agriculture, and includes important economic resources such as California's water supply infrastructure, ports, deepwater shipping channels, major highway and railroad corridors, and energy lines. In the Delta specifically, declining water quality and increasing demand for limited water resources are the subject of intense review and planning to protect this valuable resource for the future.

The watershed includes a diversity of fresh water, brackish water, and salt water aquatic habitats. Several endangered and threatened aquatic species are found here including delta smelt, steelhead, spring run Chinook salmon, winter run Chinook salmon, and others. Two-thirds of California's salmon pass through these waters, and at least half of the state's Pacific Flyway migratory water birds rely on the region's wetlands. 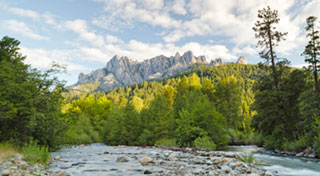 Castle Crags and the Sacramento River

EPA addresses water pollution from the watershed approach, a comprehensive framework for addressing water resource challenges. The effects of pollution and stressors (such as dams, water diversions and invasive species) in one part of an aquatic system can negatively impact other parts of the system. Restoring water quality is most effective when pollution sources, stressors and solutions are identified for the entire watershed.

Water quality problems are more completely characterized when a diverse group of stakeholders are invested in identifying sources and solutions. Science and technical information can be generated with direction from stakeholder groups and used to identify options for addressing the most pressing watershed vulnerabilities. The community investment generated by this process is important for ensuring that water quality improvements persist over time.

Major Areas of the Watershed

The San Francisco Bay Delta Watershed consists of several major waterways, including the Sacramento and San Joaquin Rivers and their tributaries. Where these two large rivers meet near Sacramento, a great inland Delta is formed where the river waters collect before passing through the Carquinez Strait into San Francisco Bay.

Besides major rivers and the Delta, the watershed also includes Suisun Bay, San Pablo Bay, San Francisco Bay and the Golden Gate Strait where the entire watershed drains into the Pacific Ocean. 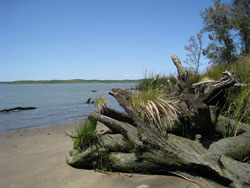 The San Francisco Bay watershed covers 4600 square miles, of which the Bay encompasses 1600 square miles. It is the largest Pacific estuary in the Americas. The Bay Area is home to over 7 million people, and is one of the densest urban areas in the nation.

Historically, San Francisco Bay had about 300 square miles of tidal marsh with 6000 miles of channels and 12 square miles of shallow pan. Until the 1850's, the Bay was navigable as far south as San Jose. Following the 1850's Gold Rush, large amounts of sediment from upstream erosion and hydraulic mining flowed into the Bay, and surrounding tidal wetlands were diked for salt production, hay-fields, or filled in, reducing the Bay's size by as much as one-third.

The Bay is home to over 500 species of fish and wildlife, 20 of which are threatened or endangered with extinction. The Bay and its surrounding water systems play host to millions of migratory birds every year as they cross the Pacific flyway.

Today there are approximately 1,100 miles of levees in the Delta protecting 625 square miles of productive agricultural areas and 500,000 residents in small, rural communities and urban areas.

The mixing of fresh water and salt water (brackish water) in Suisun Bay and the Delta provides essential estuarine habitat for migratory fish like salmon and resident fishes like delta smelt and striped bass. 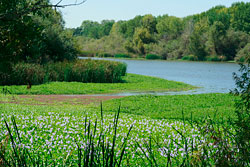 The Sacramento River Watershed is approximately 27,500 square miles and covers the majority of northern California. The watershed is bordered on the east, north, and west by mountains including the Sierra Nevada, Cascade, and Coast Ranges.

The Sacramento River is the largest river in the watershed and the longest river in California. It begins in the Cascade Range and flows over 400 miles to the south through the flat Great Central Valley where it meets the San Joaquin River forming the Delta before flowing west to the Pacific Ocean. Tributary rivers that flow into the Sacramento River include the Pit River, Butte Creek, Feather River and American River.

The lands of the Sacramento River Watershed are diverse, ranging from snow-covered peaks to low-lying agricultural areas. There are large areas of forest that cover mountain slopes, more than 3000 square miles of agriculture, and many small urban areas. The Sacramento metropolitan area covers more than 350 square miles, has a population of 2.5 million people, and is the largest urban area in the watershed.

The San Joaquin River is the second longest river in California. It begins in the high Sierra Nevada Mountains and flows approximately 100 miles to the west then turns north flowing for 260 miles where it joins the Sacramento River. Tributary rivers that flow into the San Joaquin River include (from south to north) the Fresno, Chowchilla, Merced, Tuolumne, Stanislaus, Calaveras, Mokelumne, and Cosumnes Rivers.

The land area in the San Joaquin River Watershed is diverse ranging from snow covered peaks to sub-sea level agricultural areas. There are large areas of forest that cover mountain slopes, more than 3000 square miles of agriculture in the valley, and a human population of 2 million people living in the major urban centers of Stockton and Fresno, small towns, and rural communities.

Prior to 19th century European settlement and 20th century water development, Tulare Lake Basin was characterized by four large lakes (about 800 square miles in wet years) and large tracts of wetlands (about 625 square miles) that periodically drained into the San Joaquin River watershed. Today, the large lakes and wetlands have been replaced with irrigated agriculture, rural, and urban development. Rivers that drain the Tulare Basin do not have a natural surface water pathway out of the watershed. Water moves into and out of Tulare Lake Basin by precipitation and water diversions through canals.

Tulare Lake Basin Hydrology and Hydrography: A Summary of the Movement of Water and Aquatic Species is a very useful report that describes how water flowed into and out of the Tulare Basin prior to large-scale water development and how water moves within the watershed today. Detailed maps show waterways, canals, flow direction, and locations of diversions. Hydrology of the four major river systems, the Kings, Tule, Kaweah, and Kern Rivers, are provided as well as a description of aquatic habitat, aquatic organisms, and the ability of aquatic organisms to move in and out of the Tulare Basin watershed.