Atlantic Station is a $2 billion smart growth project on a 138-acre brownfield site in the heart of Midtown Atlanta, the former site of an Atlantic Steel facility.

The environmental and economic benefits of the project are numerous: cleanup of an old industrial property; separation of sanitary and storm sewer systems; reduction of auto emissions; and creation of jobs and economic development where infrastructure already exists.

The multi-use development gives residents and workers a variety of transportation benefits, including shorter driving trips and the option of walking, biking or taking transit. 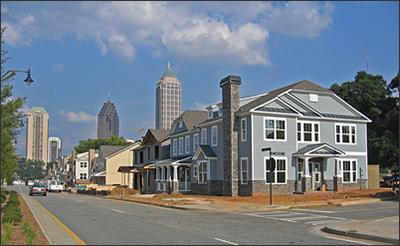 Housing being built at Atlantic Station

However, a "business as usual" approach would not have allowed the Atlantic Station project to move forward. For adequate access, the plan required construction of a highway bridge to connect the site to both transit and the highway. Because Atlanta had not met Clean Air Act standards, the bridge (a form of highway construction) would have been prohibited under a standard interpretation of EPA regulations.

This obstacle was removed after an analysis by EPA's Development, Community, and Environment Division (DCED) showed that the smart growth aspects of the redevelopment would help reduce air pollution, among other environmental benefits. The analysis, coupled with EPA's use of regulatory flexibility under an innovative program called Project XL, allowed the development to proceed.

Known for its live-work-play environment, Atlantic Station prides itself on a mix of uses, walkability, and accessibility. Housing opportunities range from affordable to upscale and include apartments, condominiums, single-family homes, detached homes, and lofts. Atlantic Station is host to a variety of restaurants, stores, and a 16-screen movie theater. Shops are near both housing and the 6 million square feet of office space situated in mid-to- high-rise LEED-certified buildings. 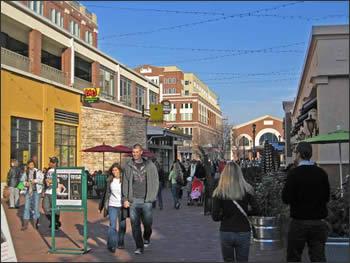 The bright yellow 17th Street Bridge, completed in 2004, crosses I-75 and I-85 and connects Atlantic Station to Midtown Atlanta. The bridge has four lanes of automobile traffic, with bicycles and transit sharing two of the four lanes. Pedestrians have wide sidewalks on each side of the bridge, with one side covered by a canopy.

The Atlantic Station Access and Mobility Program (ASAP+), which began in 2005, encourages residents and employees to walk, bike, take transit, or carpool. ASAP+ works with building managers and business owners to integrate transportation strategies, raise awareness of the benefits of alternate transportation modes, and create incentives and promotional activities to encourage residents to live, work, and play on site. The program's successes include bike-share programs and a ride-matching database.

The transportation options are helping people to drive less:

Atlantic Station also works to decrease runoff pollution to improve watershed management and water quality. Because it was developed compactly, Atlantic Station used much less land than a conventional development with the same amount of housing and commercial space. This efficient land use reduced annual stormwater runoff by almost 20 million cubic feet a year.

In addition, Atlantic Station has upgraded the sewer system that originally served the site by separating sanitary sewer from regular sewer and stormwater. This separated system, along with other inventive practices such as modified catch basins for stormwater control, will reduce the flow of pollutants from stormwater runoff to receiving bodies of water.