The city of Brea worked with residents and developers to revive its declining downtown. The result is a walkable, vibrant, mixed-use town center that has become a shopping and entertainment destination and changed the image of this Southern California city.

While many communities renovate historic buildings to revive a Main Street, much of Brea’s old downtown consisted of poor quality buildings, so historic preservation was not a good option to rebuild the area. Instead, Brea acquired 60 acres of the city center and removed blighted buildings, relocated existing businesses to appropriate locations, and reinvented the downtown.

The city combined design strategies that make walking pleasant, historic design elements, and a mix of land uses to create a sense of place. In addition, new housing options brought more residents within walking distance of the commercial area. Formerly, the downtown had centered on Brea Boulevard, a wide street that discouraged walking. The new center is Birch Street, a pedestrian-friendly avenue perpendicular to Brea Boulevard.

On-street parallel parking, curb bulb-outs, and mid-street crosswalks calm traffic and make pedestrians feel safer. Wide sidewalks accommodate street-side dining, while buildings are built up to the edge of the sidewalk and oriented toward the street. The city built two structured parking garages behind the buildings, encouraging people who drive downtown to park once and walk around. Among downtown Brea’s features are: 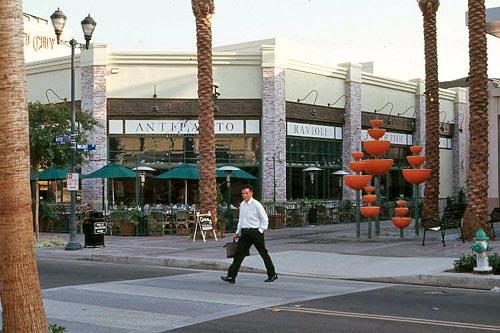 The city and principal developer CIM Group used four different architects to design the Birch Street buildings. Smaller stores surround larger buildings to create a varied, interesting streetscape. The result is a street that feels like a true downtown and looks like it was developed over a longer period.

The city has also restored two historical icons. A "Welcome to Brea" sign that had hung over Brea Boulevard is now over Birch Street, and "Charlie's Clock," once a feature of a local watch repair shop, again greets downtown shoppers.

Brea has provided a model for compact, community-oriented design. Ash Street Cottages is a development of 96 single-family homes at 10 units per acre with a half-acre community park. It has influenced many similar projects in the region with its distinctive homes and walkways that create a true neighborhood feel. The Downtown Birch Street development has loft apartments above stores to create activity around the clock.

Brea's redevelopment agency has promoted the downtown plan’s principles to adjacent developments, creating 250 new homes within one mile of downtown. Seventy-five of those units are reserved for low- and moderate-income households through the city's affordable housing program. 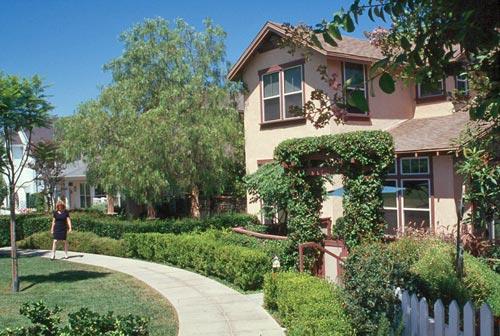 A resident enjoys a small park at Brea's Ash Street Cottages. Creating shared, public open space allowed the developer to reduce yard sizes and increase the number of homes to 10 per acre.

The project won the 2001 California Redevelopment Association's Award of Excellence in Community Revitalization. The California Downtown Association also honored Brea with its Crystal Eagle Award for Physical Improvement. Also in 2001, the National Association of Housing and Redevelopment Officials recognized the project with its Agency Award for Excellence in Program Innovation-Community Revitalization. 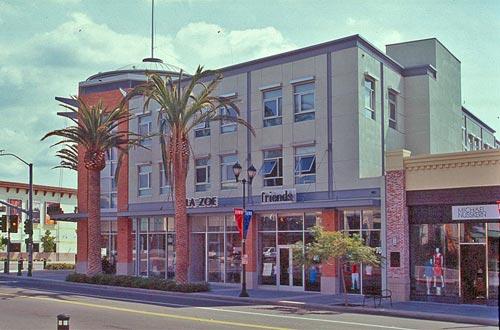 The stores in this corner building have large windows facing a sidewalk. Landscaping and street furniture make this a great area to walk around. Offices and apartments upstairs provide a ready customer base for the stores below. 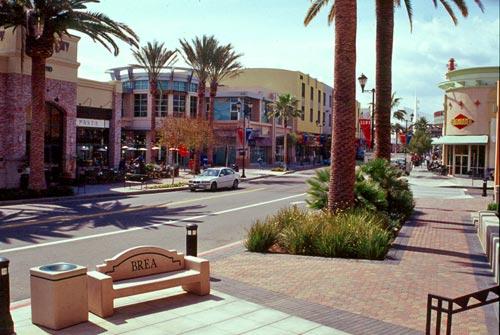 Birch Street shops surround a large movie theater on the block to the right. This variety of storefronts creates a more interesting place to walk. Photo courtesy of the Local Government Commission.