The Eighth and Pearl development shows how mixed-use projects can succeed on small parcels of land. Nestled between the pre-World War II Main Street district and adjacent historic residential buildings, the project supports stores, second-story offices, and five town homes on the roughly half-acre site of a former gas station.

Designed by Wolff Lyon Architects, the 18,300-square-foot development was part of a larger city effort to promote mixed-use development, balance jobs and housing, and offer more homes in the city to reduce traffic congestion from commuting. The city rezoned the site from commercial only to mixed use, allowing more development. This change provided an incentive to other Boulder developers to consider mixed-use projects rather than conventional single-use developments.

When completed in 1999, Eighth and Pearl’s commercial rents were approximately two-thirds of typical rates in the nearby Pearl Street Mall, providing an affordable alternative for local businesses. The development won a Congress for the New Urbanism Charter Award in 2001. 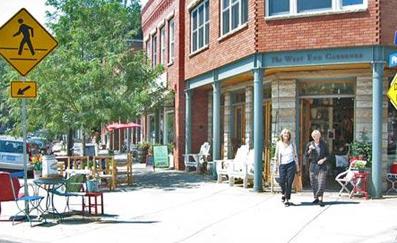 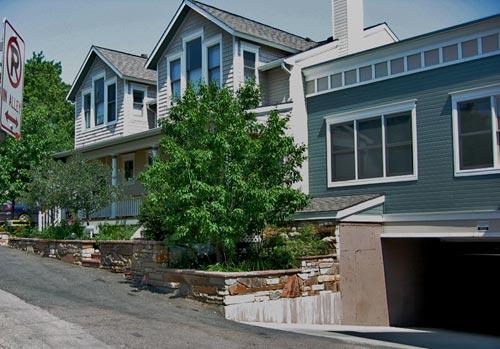 By placing parking spots underground, the developer was able to offer more homes and a wider variety of uses on this small lot.

The stores and offices face the primary street, which buffers the homes in back from the street noise. The mix of development creates a smooth transition from a commercial street to residential side street. 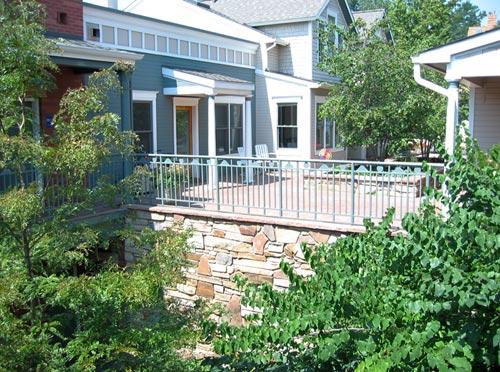 This courtyard is located above the parking structure, providing semi-private open space for residents and office workers.