The Crossings, in the city of Mountain View, 30 miles south of San Francisco, transformed a failing 1960s mall into a vibrant neighborhood that offers a variety of transportation choices.

The 18-acre infill project, developed by TPG Development, demolished the original shopping mall and replaced it with homes, retail shops, and a daycare center, all oriented toward the new San Antonio Avenue Caltrain commuter rail station. San Mateo Transit buses meet each train and connect to nearby neighborhoods. Narrow, tree-lined streets and sidewalks and small pocket parks combine to create a walkable and bikeable neighborhood.

It takes residents less than five minutes to walk from any of the houses to the stores or to the commuter rail station, and two minutes or less to walk to a park. To meet fire department requirements, some of the narrowest streets are defined as private roads and owned by the neighborhood association.

The residences are diverse and include single-family bungalows, smaller cottages, townhouses, and condominium apartments. Although priced at market rates, the compact design makes the units relatively affordable in the high-cost Silicon Valley real estate market.

When the original mall failed, the city proposed reclassification of the site from retail to residential. Residents asked for low densities with open space. Public education programs convinced the community that higher density was appropriate for a transit-oriented site. The developer's original proposal was for a more automobile-oriented, mixed-use development. The city rejected the proposal, and the design firm of Calthorpe Associates was hired to conduct community design meetings, which resulted in the final plan.

In 2002, the American Planning Association gave the city the Outstanding Planning Award for Implementation for its transit-oriented development program that produced communities like The Crossings.

This case study was published in 2006. 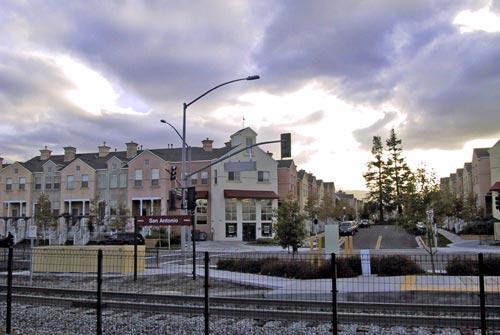 A view of The Crossings from the train station shows compact homes with a corner hair salon. A small pocket park with redwood trees is at the end of the street. 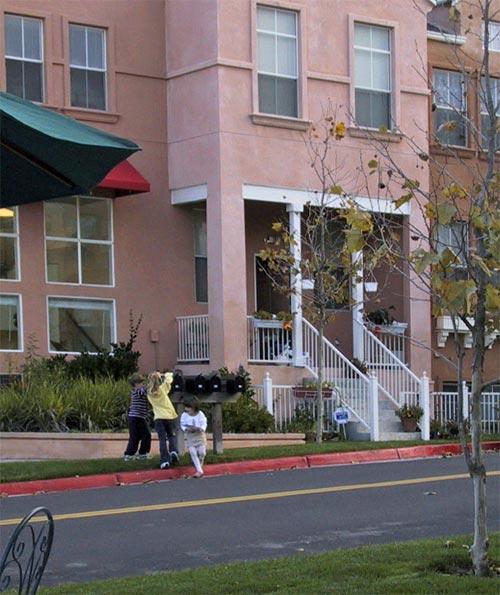 Children check for mail. Homes at the Crossings are relatively affordable in high-priced Silicon Valley, allowing middle-class families to move into the area and avoid long commutes. 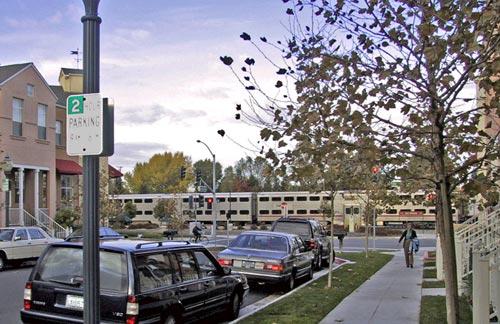 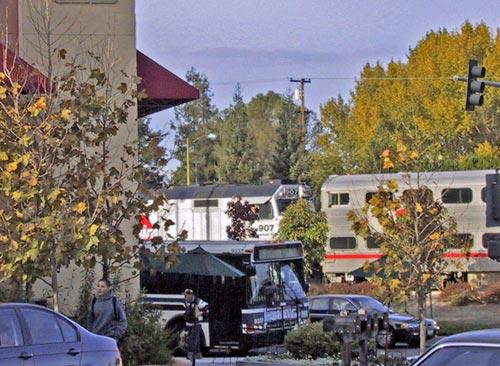 A San Mateo Transit bus meets the Caltrain commuter train. The Crossing's residents can choose from a variety of ways to get around.