The Belmont Dairy project rehabilitated an abandoned building in Portland, Oregon, with attractive, compact design to create a vibrant development that sparked the revitalization of a neighborhood shopping district. The development provided homes where residents can walk to stores and services, and it is a 10-minute bus ride from downtown Portland.

In 1997, the developer, Belmont Limited Partnership, converted half of the Foremost Dairy building into 19 market-rate loft apartments and 26,000 square feet of retail space, including shops, a restaurant, and a specialty grocery. Attached to the renovated building is a new building with 66 apartments for lower-income residents. Two years after Phase 1 was completed, the number of businesses in the neighborhood had increased by more than 50 percent.

The project's second phase, completed in 1999, is on the site of a former truck maintenance yard. It includes 30 row houses built more densely than similar conventional developments in the city. The three-story row houses have a square floor plan, with two C-shaped clusters oriented around a central, landscaped courtyard.

Garages are hidden inside the clusters so pedestrians see front porches, balconies, and bay windows rather than a wall of garage doors. Some residents have taken advantage of the area's business zoning by incorporating offices on the first floor of their homes.

The row houses were designed to transition between the apartments and nearby single-family homes. The developer met early and often with the neighborhood association and other stakeholders to explain the benefits of the compact design and respond to community desires, creating strong community support. The developer raised a mix of public and private funds to finance the project, including affordable housing loans, bonds, and low-income housing tax credits. 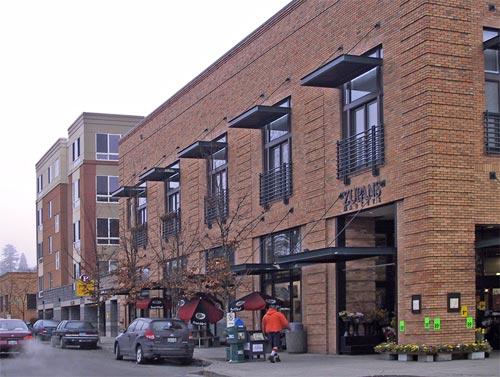 A grocery store occupies the first floor of the original dairy building. Nineteen apartments are on the second floor. The new five-story building in the rear contains 66 affordable apartments. 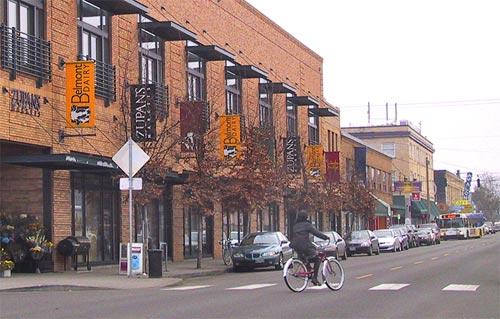 A bicyclist turns onto Belmont Street while a bus picks up passengers down the block. Downtown Portland and the Lloyd District are short bus rides away for residents of Belmont Dairy. 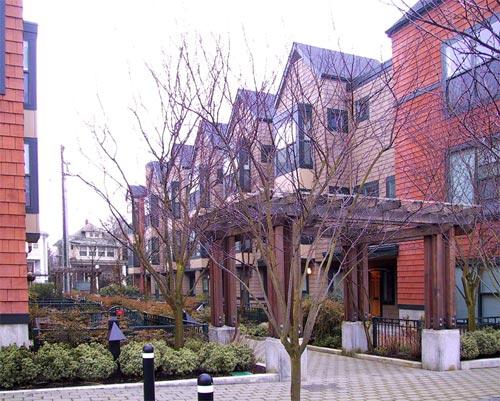 Belmont Dairy row houses look onto a central courtyard. An existing home can be seen across the street. At 34 units to the acre, this design is nearly twice as dense as typical Portland town homes. 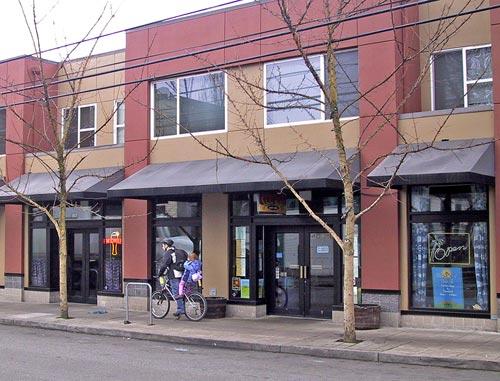 A bicyclist and child pass shops at Belmont Dairy. Here, the five-story apartment building steps down to two stories, where it faces single-family homes across the street.