Highlands' Garden Village is a compact, mixed-use, infill community built on the site of a former amusement park near downtown Denver. The site was abandoned when the Elitch Gardens Amusement Park relocated to Denver in late 1994.

The 27-acre site provides about 300 homes and 200,000 square feet of commercial and live/work space, while still preserving and restoring 140,000 square feet of open space. Perry Rose/Affordable Housing Development Company took advantage of the site's location and natural and historic amenities to build a compact neighborhood.

The community offers a wide variety of housing choices, including single-family detached homes, town homes, carriage homes, garden-style apartments, and senior housing. A cohousing community provides a common house and shared public space to bring residents together. Forty percent of the senior housing and 20 percent of the apartments are affordable to households that earn 50 percent or less of the area median income.

The developer engaged the surrounding community in a series of workshops to get their input on the project's design. The edges of the plan reflect the adjacent neighborhoods, with new single-family homes facing older dwellings on three sides of the development. On the fourth side is a major street with restaurants, studios, and shops with live/work town homes and offices above.

All buildings face the street, with on-street and interior-lot parking. The development's density tapers from the highest density near the commercial area to the lowest near existing neighborhoods of single-family homes.

All of Highlands' Garden Village's buildings use recycled materials and energy-efficient products. Materials from the demolition of the amusement park were recycled for use in the new development. The neighborhood includes drought-tolerant landscaping to reduce water demand. 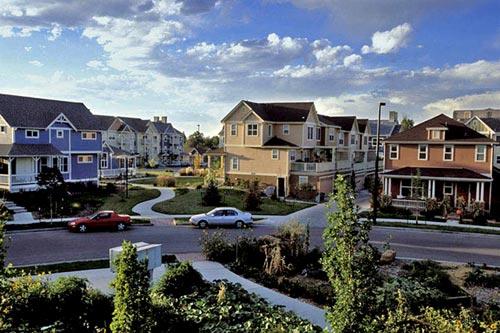 The renovated historic Elitch Theater and the nearby carousel house preserve the area's distinctive cultural heritage while drawing people to the neighborhood's cafes, shops, farmers market, offices, and artist studios. Commercial and cultural spaces are oriented around plazas and gardens, connected by sidewalks and roadways designed like country lanes to encourage walking and biking. A nearby bus route goes to downtown Denver and nearby areas. 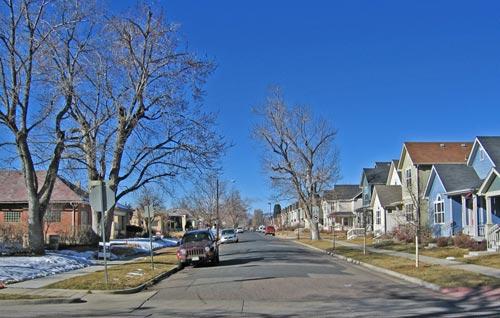 Apartment buildings, town homes, and detached houses taper from taller buildings to lower ones, enabling Highlands' Garden Village to provide a variety of housing choices while fitting into the neighborhood.

The historic Elitch Theater has been restored to host performances and neighborhood events.

Parking is reserved for a natural gas-powered carshare vehicle. Good transit service and carsharing let residents of Highlands' Garden Village own fewer cars if they choose.