Region 1 has facilitated the successful reuse and redevelopment of Superfund sites across New England. These successes are largely due to the diligence and creativity of cooperating site owners, local governments, community organizations, state agencies, tribes, developers and other stakeholders.

To celebrate these outcomes, Region 1 created the Excellence in Site Reuse award. The award recognizes site stakeholders who have made extraordinary efforts to support Superfund redevelopment and reuse.

Region 1 continues to successfully support the beneficial reuse of Superfund sites in a manner that enhances the cleanup remedies in place, minimizes the Agency’s responsibilities for long-term care and maintenance, promotes long-term stewardship of the remedies, and provides economic, environmental and social benefits to communities. 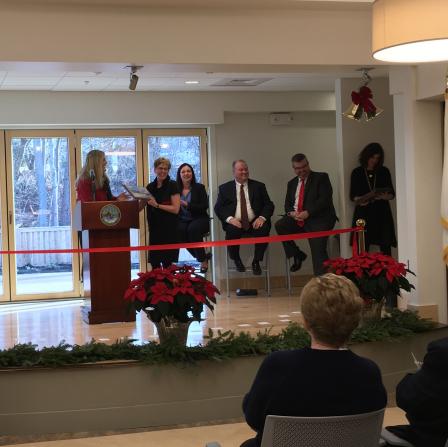 Presentation of the Region 1 Excellence in Site Reuse Awards at the grand opening of the new senior-center facility at the Blackburn & Union Privileges Superfund site.In December 2018, Region 1 participated in the ribbon-cutting ceremony for a new senior center at the Blackburn & Union Privileges site in Walpole, Massachusetts. Region 1 presented Excellence in Site Reuse awards to the town of Walpole (Town) and to the Walpole Council on Aging for their exceptional leadership and reuse coordination in transforming this former industrial property into a recreational, educational and health resource for seniors. Strong community support for the project was evidenced by a $6.8 million contribution from the Town, $1.4 million raised by private donors and substantial support from Walpole Co-operative Bank. The new Walpole Co-operative Bank South Street Center is the first stand-alone senior center facility in the community.
Media HighlightsExit