The 22-acre Eastland Woolen Mill Superfund site is a former textile mill that operated from 1909 to 1996 on Main Street in Corinna, Maine. Disposal practices resulted in extensive contamination of soil and groundwater beneath and in the vicinity of the former Eastland Woolen Mill, in the sediments in the East Branch of the Sebasticook River, and in numerous private drinking water wells.  The State of Maine performed an emergency response action and worked with the community to establish a public water supply prior to EPA involvement at the Site. In 1999, EPA placed the site on the Superfund program’s National Priorities List (NPL) and began cleanup activities at the site.

A prominent local industry, the textile mill’s eventual closure left an economic void as well as unoccupied property. Recognizing the site’s reuse potential, the Town of Corinna obtained a grant from EPA and developed a reuse plan for the site and surrounding areas. The Corinna Village Center Reuse Plan focuses on mixed-use redevelopment of downtown Corinna, and includes commercial, residential and recreational areas.

“EPA made every effort to work with the Town in the planning and implementation stages of both the cleanup and redevelopment of Corinna. The opening of the Corundel Commons housing facility is a prime example of what can be accomplished when agencies share the same goals.”
-Dalton Mullis, former Corinna Town Manager

EPA, Maine Department of Environmental Protection (MEDEP), the Town of Corinna, and local stakeholders worked together to integrate the reuse plan with the site cleanup.  Significant progress to date includes: construction of Corundel Commons, a 20-unit senior housing facility; relocation of the former Odd Fellows Building historic building and facilitating the adaptive reuse of this building as a restaurant and general store; relocation of Main Street to improve traffic flow; restoration of the Mill Pond to a free flowing section of the East Branch of the Sebasticook River; a recreational trail/riverwalk; a commemorative war memorial; and a community bandstand for summer concerts and events. These strategic reuses have greatly improved the community and ecological value of the former abandoned property. 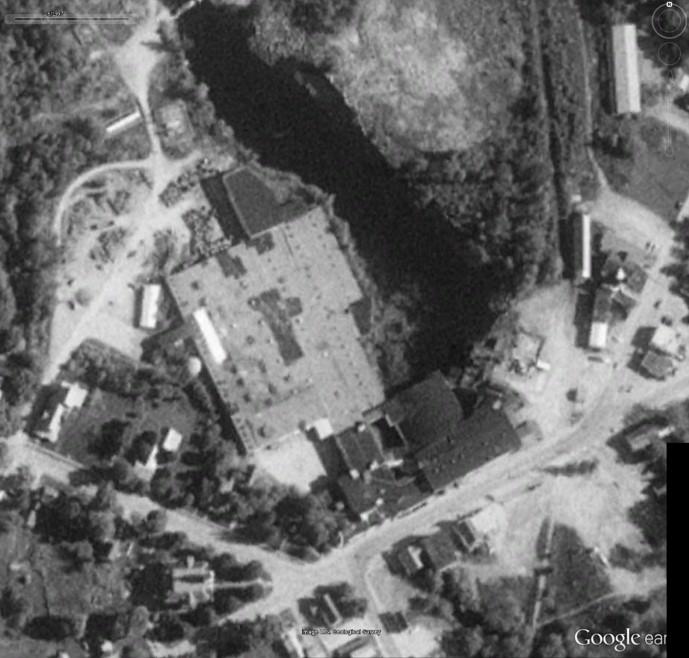 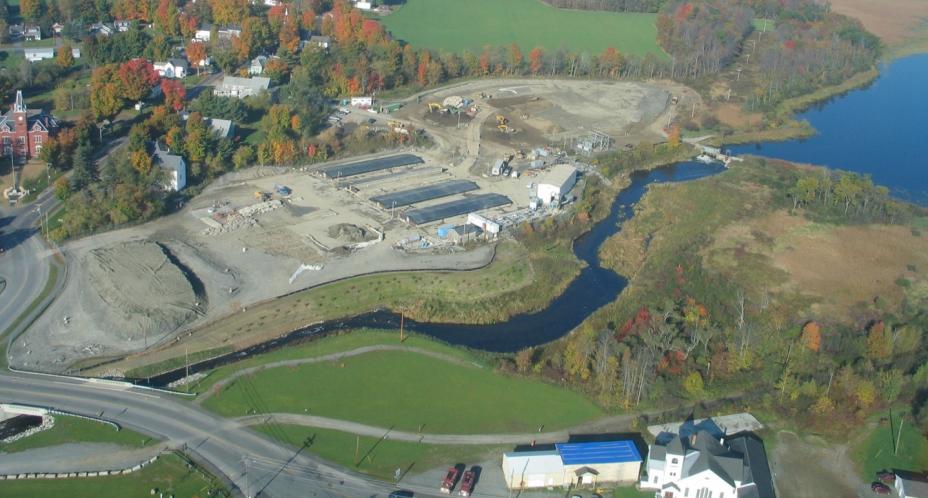 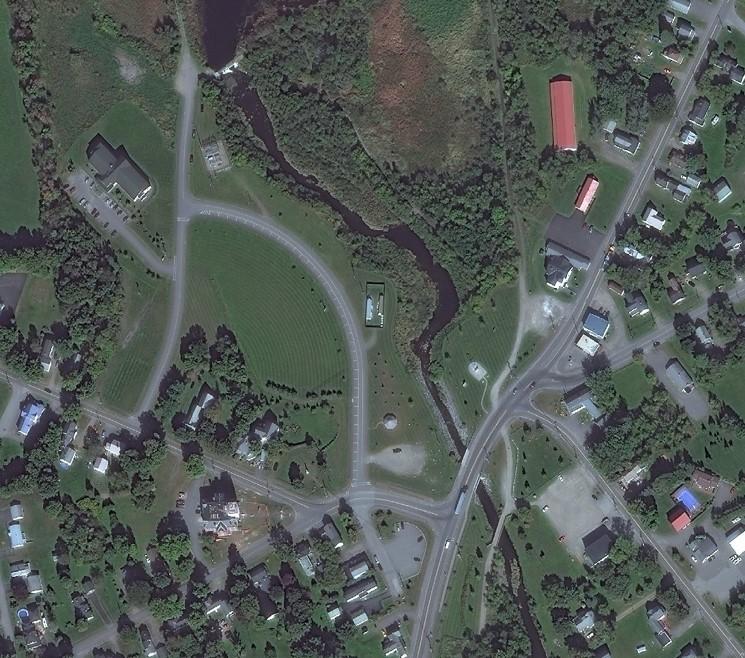 The Fletcher’s Paint Works & Storage Superfund site in Milford, New Hampshire, is in a densely populated area of residential and commercial/industrial properties.

Commercial and light industrial use at the site dates back to the late 1700s. Fletcher’s Paint Works operated from approximately 1948 until 1991 as a manufacturer and retail distributor of paints and stains for mostly residential uses.

During Fletcher’s operations, hundreds of drums of hazardous substances were stored at the site. In 1984, the nearby water supply well was found to be contaminated with low levels of volatile organic compounds (VOCs). This discovery triggered the removal of the well from service and prompted EPA to conduct a series of investigations and remediation activities. EPA listed the site on the Superfund National Priorities List in 1989.

This video tells how collaboration between EPA, the state of New Hampshire, the town of Milford, local citizens, and GE enabled the cleanup effort.

Placed on the National Priorities List in 1989, Otis ANGB/Joint Base Cape Cod (JBCC) is a federal facility Superfund site approximately 65 miles southeast of Boston and covers over 20,000 acres in the towns of Bourne, Falmouth, Mashpee and Sandwich. Multiple plumes of contaminated groundwater are undergoing active groundwater remediation to protect Cape Cod’s federally designated sole source aquifer. As of December 2015, the total groundwater extraction and treatment rate is 10.8 million gallons per day requiring 8,933 MW hours per year of electricity, all of which is produced by the wind turbines.

Otis ANGB/JBCC’s cleanup groundwater cleanup program is unique because the treatment systems are all powered by renewable energy. In 2007, power usage and extraction flow rate peaked at 13,900 MWh and 18 million gallons per day. Construction of wind turbines began in 2008 and, by 2012, the Air Force had achieved 100 percent offset of the program’s energy usage, making the Otis ANGB/JBCC project the first large-scale Department of Defense cleanup program to be completely offset by renewable energy. 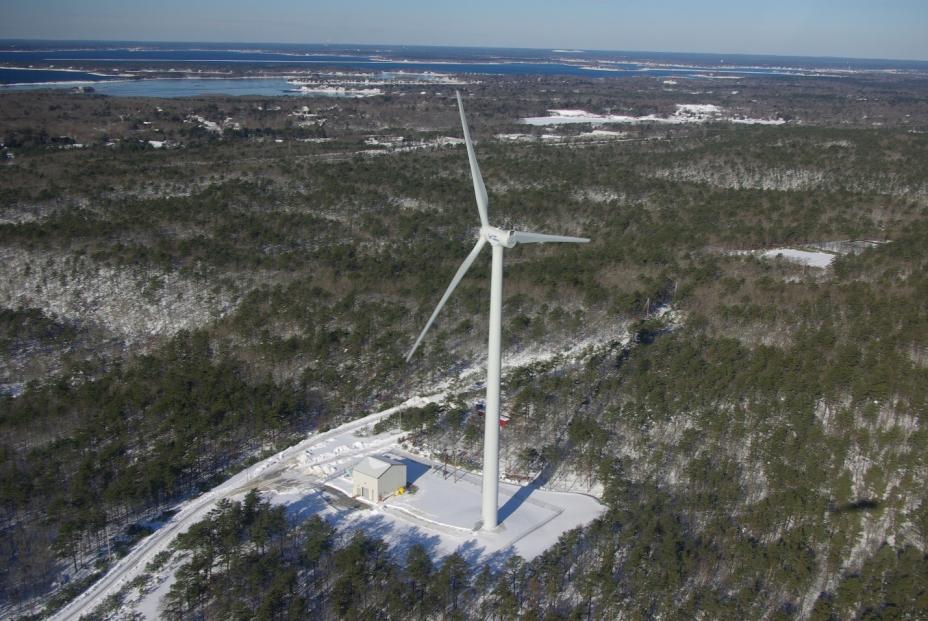 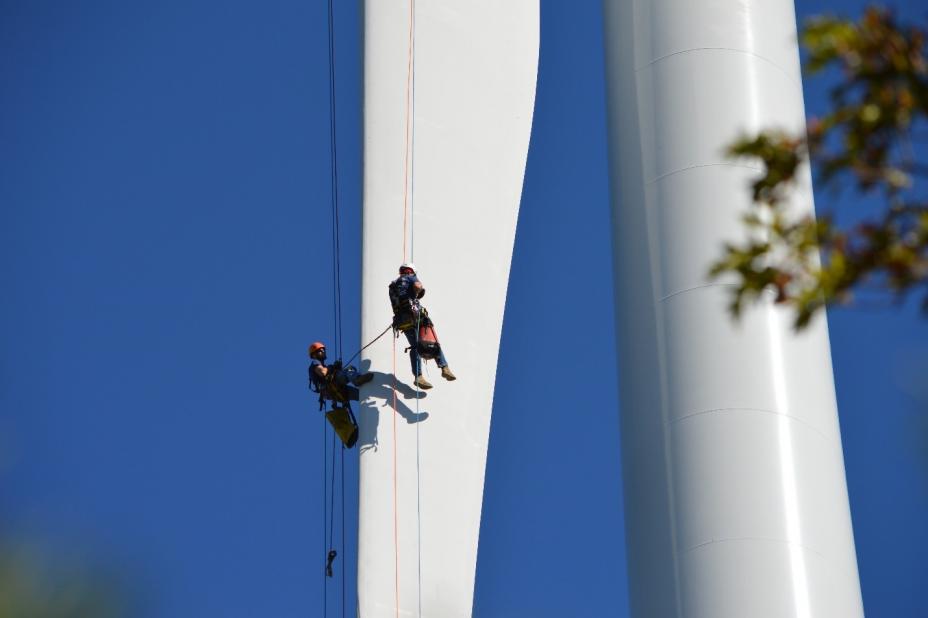