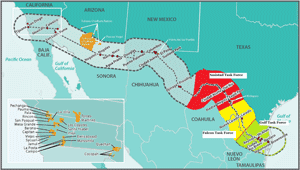 The Texas/Tamaulipas/Nuevo León/Coahuila Regional Workgroup (often called the "Four-State Regional Workgroup") is one of four regional workgroups in the U.S.-Mexico Border 2020 Environmental Program. That program is a partnership among the U.S. EPA, Mexico’s SEMARNAT (counterpart to EPA), the ten border states in the two countries, and U.S. border tribes. This regional workgroup is one of the most complex of the four regional workgroups, because of its geographical expanse and the number of municipalities. The region includes parts of three states and a total of at least 29 municipios on the Mexican side, and 168 cities and towns on the U.S. side. Recognizing this, the workgroup divided itself into three geographically based Task Forces—Amistad, Falcon, and Gulf, each of which has established subject-specific committees related to its priority concerns.

The Four-State Region extends from the Coahuila-Chihuahua border in Mexico (when that border reaches the Rio Grande, it is in the Big Bend area) eastward to the Gulf of Mexico.