Other Pages And Websites

A complex ecological dataset is likely to exhibit features attributable to data variability, rather than stable properties of the system. Basic statistical tests and confidence intervals can account for data quantity and variability, and identify relatively well-supported conclusions with acceptable risks of error. 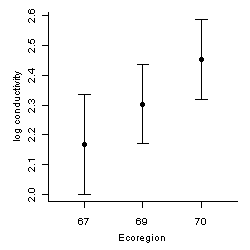 A confidence interval provides a range for a parameter, within which values can be considered in reasonable agreement with data. Confidence intervals take into account the quantity and variability of data (Figure 1). Statistical tests can help avoid over-interpretation of noisy data by focusing analysis on effects that are unlikely attributable to data variability.

Confidence intervals and statistical tests may be useful in analyzing data to support a causal analysis. However, scoring of evidence in a causal assessment is based on multiple lines of evidence. It is not based solely on results of statistical tests or any other statistical procedures. See Additional Information on Interpreting Statistical Tests in the Helpful Links.

Other Pages And Websites

Analysts should consider the possibility that some samples in a dataset may not actually provide independent evidence because samples taken relatively close together in space or time are to some degree redundant. Measurements also may occur as clusters, with a tendency for less variation within than among clusters. For example, a study involving chlorophyll concentration in lakes may involve multiple lakes, and samples at multiple locations in each lake. In this case, samples from each lake are "clusters".

If individual samples depend strongly on one another, use of standard statistical methods that assume independence (e.g., confidence intervals) may result in greater confidence in the strength of conclusions than is actually justified by the evidence in the data.

These concerns are all associated with the technical topic of autocorrelation, or the correlation of repeated measurements on the same variable. In ecology, similar concerns may be discussed under the topic of pseudoreplication. When analyzing biomonitoring data we are most often concerned with positive spatial autocorrelation, in which measurements tend to be similar when taken from locations close together. A simple example of autocorrelation in a stream is the likelihood that conditions downstream are not independent of conditions upstream.

The first line of defense against autocorrelation problems is familiarity with the study design, along with an understanding of variation occurring on different spatial and temporal scales at the sample sites. These insights may be sufficient to identify data that are adequately independent. For example, if morphology of a stream can be described as an alternation of riffles and pools, the analyst might somehow obtain a single value for each riffle or pool, perhaps by averaging sample measurements from the same riffle or pool. 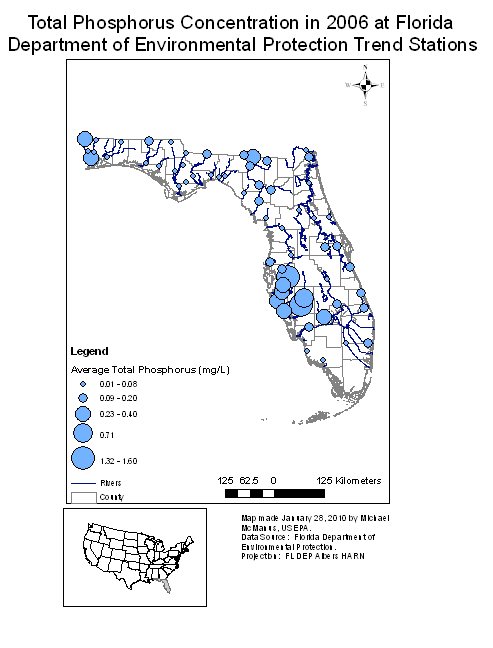 Figure 2. Total phosphorus concentrations from water samples across Florida (size of symbol is proportional to concentration).Since autocorrelation is generally present in environmental data on some scale, we emphasize graphical evaluation. Any mapping approach that can reveal a tendency for clustering of relatively high or relative low values may be effective in revealing spatial autocorrelation. For example, a map of total phosphorus concentrations in Florida suggests a cluster of high phosphorus measurements in the central western portion of the peninsula (Figure 2). Specialized graphical techniques like the variogram, discussed in the supplemental information below, can be helpful for identifying a minimum spatial or temporal separation, such that measurements will be practically uncorrelated. Statistical tests for spatial and temporal autocorrelation also are available. The usual issues in correct use of statistical tests should be kept in mind. That is, for any given level of autocorrelation, the chance of a statistically significant test will depend on sample size. Graphical techniques parallel to those for use in diagnosing spatial autocorrelation also are available for temporal autocorrelation (e.g., for use when evaluating the time series for an individual monitoring station).

If autocorrelation is judged to be important for evaluation of a given data set, based on statistical tests or graphical evaluation, relatively simple approaches may be considered appropriate for taking autocorrelation into account, in the analysis of data. Temporal correlation can be eliminated by separate analysis of "time-slices", such as individual years of biomonitoring data collection. Results for individual years may be compared using confidence intervals for effect indices. For some purposes clustered data may be reduced to a single summary statistic, for example (in the lake example) a mean value for each lake. (Note though, that we may then lose the ability to evaluate stressors that vary within lakes!)

A significant amount of statistical literature relates to how autocorrelation can be incorporated into regression models (see Additional Information on Autocorrelated Data in the Helpful Links). For modeling a times series for a single site, some relatively simple approaches involve use of lagged X variables. The analyst may, however, opt for relatively advanced multilevel models, which may allow for various patterns of autocorrelation, variation on multiple spatial scales, simultaneous modeling of data for multiple years, and stressor that vary within as well as between sites. Participation of a statistician for advanced analyses may be helpful.

The effect of a stressor on a measure of biological condition (i.e., the stressor-response relationship) may be misunderstood if other environmental variables or stressors that may affect the biological measure are ignored. In many cases, a simple relationship observed between a measure of biological condition and a single stressor may reflect the effects of additional stressors. For example, increased urban land use encompasses many different stressors (e.g., increased flow flashiness, increased concentrations of different pollutants, and degraded physical habitat), all of which can influence the aquatic biological community.

Analyses to estimate stressor-response relationships often must take measures to avoid attributing biological effects to a single stressor when observed effects are as readily attributable to simultaneous exposure to multiple, associated stressors. This issue is particularly important when estimating stressor-response relationships from large, regional data sets, in which multiple, associated stressors are common.

One Approach for Controlling for Confounding Variables

For a basic data analysis tool that can address confounding to some degree, we emphasize scatterplots in combination with stratification. Stratification breaks the dataset into subsets (i.e., strata) that are relatively homogeneous with respect to one or more concomitant variables. If there is adequate variation within strata for the stressor of interest, one can evaluate the stressor-response relationship with concomitant variables approximately fixed, minimizing their influence on the estimated relationship. In a scatterplot, the strata may be labeled distinctively. A related approach is to use special symbols to flag points in the scatterplot that have relatively extreme values of concomitant variables.

We illustrate the use of stratification using data from streams of the western United States, in which we are interested in estimating the effects of total nitrogen (TN) on total macroinvertebrate richness. TN and percent substrate sand/fines (SED) are strongly correlated (r = 0.65), and so the bivariate relationship we would estimate between TN and total richness may be confounded by SED. To control for the effects of SED, we first break the dataset into 6 strata, defined by SED values (Table 1). 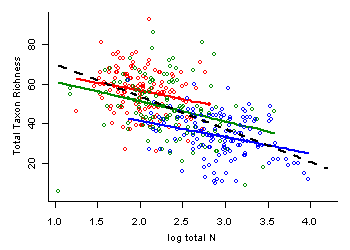 Figure 3. Example of use of stratification to control for confounding. Colors correspond to different strata based on SED values (Table 1). For clarity, only Stratum 1 (red), Stratum 4 (green), and Stratum 6 (blue) are shown. Colored lines indicate linear regression fit within each stratum. Dashed black line shows linear regression fit using full data set.Within each stratum, the strength of correlation between SED and TN is greatly reduced (Table 1), and thus, the potential confounding effects of SED on the estimate effect of TN on total richness is also reduced. One could then use regression analysis within each stratum to estimate the TN-total richness relationship (Figure 3). In this example, the slope of the relationship between TN and total richness is similar across strata (colored lines), but noticeably less steep than the slope estimated using the full data set (black dashed line). This difference suggests that SED does indeed bias the simple estimate of relationship between TN and total richness using the full data set.

If concomitant variables (e.g., other stressors, sources) are strongly correlated with the stressor of interest in the available data, the specific roles of individual stressors may be difficult to evaluate. Alternatively, a group of correlated stressor variables may be combined using some index. For example, concentrations of multiple toxic metals might be combined using a simple concentration addition model or a more mechanistic biotic ligand model. More definite conclusions about the roles of specific stressors might depend on additional types of information. Methods for evaluating associations of stressor variables may be helpful in planning an informative analysis.

Details regarding statistical approaches for identifying potential confounding variables and for controlling their effects can be found on the page Additional Information on Confounding, available from the Helpful Links box.