Topics In Estimating Taxon-Environment Relationships
Other Pages And Websites

Parametric regressions assume that taxon-environment relationships follow a pre-specified form. A common assumption for taxon-environment relationships is that the distribution of a particular taxon is unimodal with respect to environmental gradients. Then, in the case of presence/absence data, a convenient model for the probability of observing a particular taxon, following ter Braak and Looman (1986), is as follows (Equation 3):

Examples of taxon-environment relationships estimated using Equation 3 for two genera, Heterlimnius  and Malenka, with respect to stream temperature are shown in Figure 5. The computed curves closely track the observed capture probabilities for both genera. Confidence limits broaden for Heterlimnius as temperatures approach the minimum value, because data are sparse in that region. 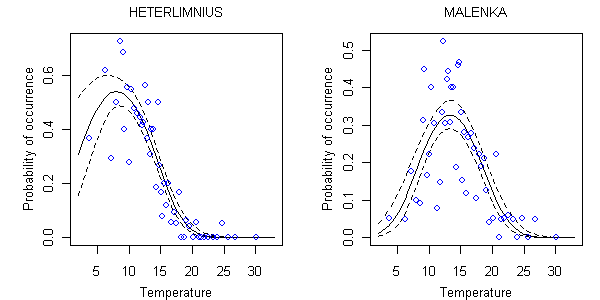 The effect of each environmental variable (e.g, x, y) on taxon occurrence is modeled as a quadratic function. Also, the possibility that the two variables interact can be modeled. In the case of Equation 7, the interaction between the two variables is modeled as the product of x and y. Terms can be included or excluded depending upon our understanding of the variables and their effects upon taxon persistence. For example, you might choose to omit the interaction term, xy, if you knew that the two environmental variables did not interact.

Simultaneously modeling several variables often provides a more accurate means of distinguishing between the effects of different correlated stressors, for example, between temperature and sands and fines as shown in Figure 6a (Yuan 2007b). 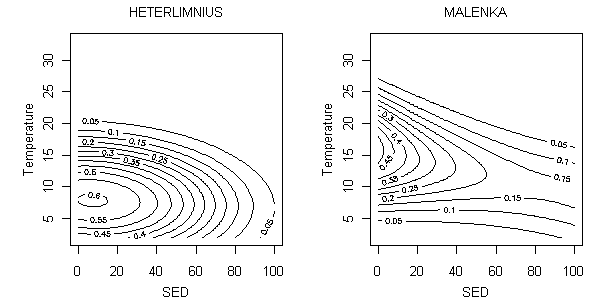 Figure 6a. Parametric relationship between probability of occurrence and temperature (°C) and percent sand/fines (SED) for Heterlimnius and Malenka using a parametric model. Contours represent mean probabilities of occurrence.

Once taxon-environment relationships have been estimated using parametric regression, the most appropriate method to use for computing inferences is a maximum likelihood approach.

It also is possible to develop regression relationships that model the abundance of different taxa, rather than their presence or absence (Figure 6b).

Taxon-environment relationships based on absolute or relative abundance data also can be modeled, but the regression models for doing this become more complex. The use of presence/absence data, rather than abundance data, is recommended in most cases.

The abundance of a given taxon can be difficult to model statistically because the abundance values vary strongly from no individuals to hundreds, or thousands of individuals. Because of this variance, and because abundance values are strictly positive, the distribution of the sampling error for abundance observations are often assumed negative binomial (White and Bennets 1996). 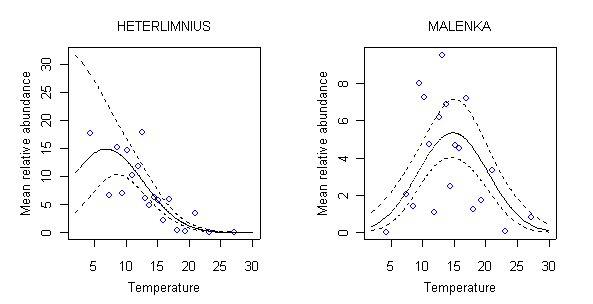