The latter “coupled” method is beneficial for studying important interactions between chemistry and weather. For example, aerosols can affect the amount of sunlight that reaches the surface, thus impacting temperature. Aerosols also have important impacts on cloud formation and cloud albedo

albedoThe proportion of the incident light or radiation that is reflected by a surface, like a forest, desert, city, or ocean. It can also refer to the light reflected by a cloud.

albedoThe amount of solar radiation reflected from an object or surface, often expressed as a percentage.. CMAQ has been coupled to the Weather Research and Forecasting (WRF) model for this purpose.

In the WRF-CMAQ model (Wong et al., 2012), WRF and CMAQ are simultaneously integrated and information from CMAQ, like aerosol concentration, is passed into WRF so that the chemistry can impact the weather. Specifically, the CMAQv5.2 two-way model gives users the options to pass aerosol optical properties to the radiation modules in WRF (aerosol direct radiative effects).  The ability to pass aerosol information into the cloud microphysics routines (aerosol indirect effects; Yu et al, 2014) is currently under development and will be available in a future release.

The WRF-CMAQ model passes vital atmospheric state and pollutant information back and forth between two interdependent modules.

Aerosol information from CMAQ is transferred to the meteorological model, WRF.  Wavelength dependent aerosol optical properties (extinction, single scattering albedo, and asymmetry factor) are estimated using aerosol composition and size distribution information simulated by CMAQ in conjunction with an algorithm based on Mie theory.  Black carbon is treated by the core-shell approach developed by Frank Binkowski based on Bohren and Huffman (1983). This has been implemented in the shortwave Rapid Radiative Transfer Model for General Circulation Models (RRTMG) radiation scheme in WRF, where aerosol optical properties are calculated for 14 wavelength bands (Clough et al. 2005). The aerosol optics calculations in the WRF-CMAQ model were assessed through comparison to measured optical properties of ambient aerosols made during the Carbonaceous Aerosol and Radiation Effects Study (CARES) as detailed by Gan et al. (2015a).

The impacts of enhanced aerosol concentrations on surface-level meteorology are depicted here. There is a positive feedback of pollutant levels when concentrations are high enough and conditions are favorable.The ability of the WRF-CMAQ system to reproduce historical trends in the tropospheric aerosol burden, aerosol optical depths, and clear-sky short wave radiation across the northern hemisphere and the U.S., has recently been assessed through extensive comparisons of long-term simulations of these quantities with observation-derived records from 1990 to 2010 (Xing et al. 2015a,b; Gan et al., 2015b). The model captured declining Aerosol Optical Depth (AOD) trends along with the corresponding decreased top-of-atmosphere (TOA) short-wave radiation (SWR), or  upwelling

upwellingThe upward movement of an air mass in the atmosphere., and increased surface SWR, or downwelling

downwellingThe downwelling movement of an air mass in the atmosphere., in the eastern US, Europe and the northern Atlantic for the period of 2000–2010. Estimates of the aerosol direct radiative effects (ADE) at TOA were comparable with those derived from measurements and, compared to general circulation models, the model exhibited better estimates of surface-aerosol direct radiative efficiency (Eτ) (Xing et al., 2015b).

Additionally, top-of-atmosphere clear-sky shortwave radiation during 2000-2010, inferred from the NASA Cloud and Earth’s Radiant Energy System (CERES) satellite retrievals show decreasing trends in the eastern U.S. and increasing trends in eastern China. The inclusion of ADE in WRF-CMAQ yielded better agreement with these contrasting trends suggesting that the trends in clear-sky radiation are influenced by trends in the tropospheric aerosol burden. 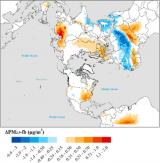 Impacts of aerosol cooling are not limited to changes in surface temperature, since variation in atmospheric dynamics caused by the increased stability can worsen local air quality and impact human health.

Hemispheric WRF-CMAQ model simulation over two decades (1990−2010) shows enhanced surface PM2.5 concentrations in the most polluted regions of the world due to the aerosol direct effect.

The first WRF-CMAQ system was released in 2012 and used WRFv3.3 and CMAQv5.0. With each new CMAQ release, a new two-way system is developed based on the latest available WRF version. The most current version uses WRFv4.1.1 and CMAQv5.3.2. Instructions for compiling and running the WRF-CMAQ system are also included with each release.