What are Heat Islands?

Structures such as buildings, roads, and other infrastructure absorb and re-emit the sun’s heat more than natural landscapes such as forests and water bodies. Urban areas, where these structures are highly concentrated and greenery is limited, become “islands” of higher temperatures relative to outlying areas. These pockets of heat are referred to as “heat islands.” Heat islands can form under a variety of conditions, including during the day or night, in small or large cities, in suburban areas, in northern or southern climates, and in any season.

A review of research studies and data found that in the United States, the heat island effect results in daytime temperatures in urban areas about 1–7°F higher than temperatures in outlying areas and nighttime temperatures about 2–5°F higher. Humid regions (primarily in the eastern United States) and cities with larger and denser populations experience the greatest temperature differences. Research predicts that the heat island effect will strengthen in the future as the structure, spatial extent, and population density of urban areas change and grow.[1]

Heat islands form as a result of several factors:

Heat islands are usually measured by the temperature difference between cities relative to the surrounding areas. Temperature can also vary inside a city. Some areas are hotter than others due to the uneven distribution of heat-absorbing buildings and pavements, while other spaces remain cooler as a result of trees and greenery. These temperature differences constitute intra-urban heat islands. In the heat island effect diagram, urban parks, ponds, and residential areas are cooler than downtown areas. 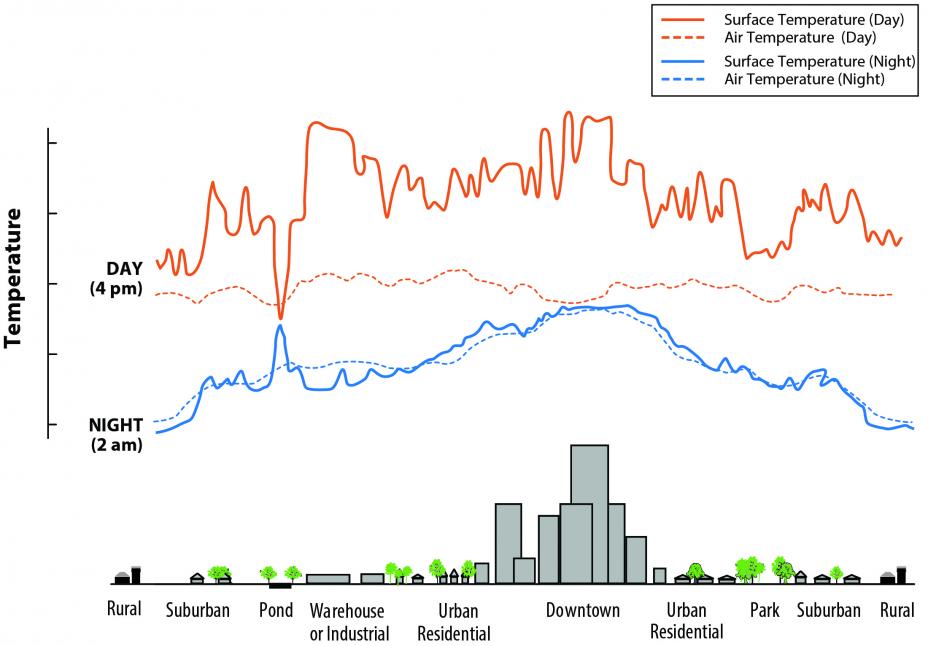 Surface temperatures vary more than atmospheric air temperatures during the day, but they are generally similar at night. The dips and spikes in surface temperatures over the pond area show how water maintains a nearly constant temperature day and night because it does not absorb the sun’s energy the same way as buildings and paved surfaces. Parks, open land, and bodies of water can create cooler areas within a city. Temperatures are typically lower at suburban-rural borders than in downtown areas.

In general, temperatures are different at the surface of the earth and in the atmospheric air, higher above the city. For this reason, there are two types of heat islands: surface heat islands and atmospheric heat islands. These differ in the ways they are formed, the techniques used to identify and measure them, their impacts, and to some degree the methods available to cool them.