The Cartagena Convention Parties meet every two years.  EPA participated in the most recent meeting, which took place in Roatan, Honduras in June 2019.

The Cartagena Convention seeks to promote regional cooperation towards the protection and sustainable development of the Wider Caribbean Region, known in the context of the convention as the Convention Area.  This area is defined as:

“the marine environment of the Gulf of Mexico, the Caribbean Sea and the areas of the Atlantic Ocean adjacent thereto, south of the 30 degree north latitude and within 200 nautical miles of the Atlantic coasts of the States referred to in article 25 of the Convention.”

The Cartagena Convention presents a legal structure under which members are required to take action aimed at preventing, controlling and reducing pollution of the Convention area from the following sources:

The Cartagena Convention also requires that all parties take measures to protect and preserve rare or fragile ecosystems, and the habit of endangered species, within the convention zone. 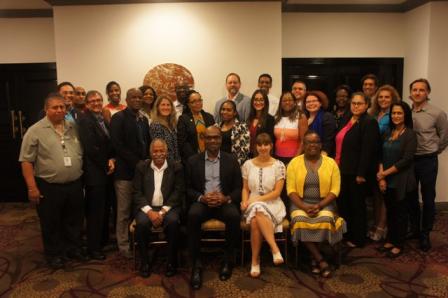 In 1994, the UNEP Regional Seas Office for the Caribbean, located in Kingston, Jamaica, which formed the Caribbean Environment Programme (CEP), concluded an assessment of land-based sources of marine pollution in to the Convention area.  The assessment indicated that domestic waste water was the major contributor of marine pollution in this region, as well as noting several other large point sources of pollution to the Wider Caribbean marine environment.

The LBS, or Land-Based Sources Protocol, was a response to the insights gained from this assessment and other evidence identifying the main point sources of marine pollution in the Convention Area.  The protocol was adopted to the Cartagena Convention in 1999, and entered into force in 2010.

The objective of the LBS is to ensure that contracting parties, as much as possible, mitigate marine pollution to the Convention area from land-based sources of pollution’ specifically targeting domestic waste water and agricultural non-point sources of pollution.  The LBS includes the following provisions:

Parties to the Protocol are obligated to establish legally binding effluent limitations for domestic sewage, and develop plans for the reduction and control of agricultural non-point sources. Parties to the LBS Protocol can request the assistance of the UNEP Caribbean Regional Coordinating Unit (UNEP CAR/RCU), headquartered in Kingston, Jamaica, and other specialized agencies in the Region, to build national capacity in areas such as:

Parties to the LBS Protocol

As of April 2016, the twelve countries that have ratified the LBS Protocol include:

The LBS Protocol provides the framework for addressing pollution based on national and regional needs and priorities, focusing on addressing the sources of pollution and the development of best management practices to prevent, reduce and control pollution in the Wider Caribbean Region.

Protecting watersheds, coastal areas and marine resources are critical for countries of this region, where most of the Region’s inhabitants live in coastal areas. A significant proportion of marine pollution in the Region is estimated to originate from land-based sources and activities, placing the tourism and fishing sectors as well as its fragile coastal ecosystems at high risk. Countries in the Region depend heavily on tourism, agriculture, and fishing for their livelihoods.

The LBS Protocol will continue to serve as the regional instrument in the Wider Caribbean Region for the implementation of UNEP’s Global Programme of Action for the Protection of the Marine Environment from Land-Based Activities Exit and UNEP’s Regional Seas Programme.