Collaboration with Mexico to Reduce Emissions from Ships 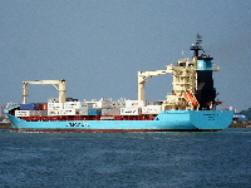 The Maersk Line ship "Roubaix."
Through ongoing, joint work with EPA, the Mexican government has been actively exploring international actions to reduce air pollution from ships near local communities. Mexico has been learning from the United States' experience, and is now working toward the ratification of MARPOL Annex VI (an international air pollution agreement), and establishment of a Mexican Emission Control Area (ECA). Shared work between the United States and Mexico began in 2009, and has included Canada since 2013.
As part of the International Convention for the Prevention of Pollution from Ships (MARPOL), Annex VI requires ships to reduce air pollution. MARPOL Annex VI also enables countries to designate more stringent international standards in an ECA. Countries must be party to MARPOL Annex VI to establish an ECA. In the U.S., the North American ECA became enforceable on August 1, 2012.
Throughout this effort to reduce air pollution from ships, EPA and Mexico’s Ministry of Environment and Natural Resources (SEMARNAT) have been reaching out to other relevant Mexican ministries and stakeholders, initially to raise their awareness of the benefits of reducing ship emissions and, as the significant benefits to Mexico became clearer, to gain their support for this effort.
In June 2016 at the North American Leaders Summit, then-President Obama and his counterparts from Mexico and Canada made a joint commitment to work together to support finalization and submission to the IMO of a Mexican Emission Control Area designation proposal. The action plan calls on the ongoing CEC work to implement this high level commitment.  The environment chapter of the recently-concluded US-Mexico-Canada trade agreement (USMCA) sets out air quality priorities for the U.S., Mexico and Canada, including the reduction of emissions from maritime shipping.  Although the USMCA is a negotiated outcome that still requires Congressional approval in all three countries, the fact that maritime air pollution is highlighted in this new agreement underscores the shared understanding of the importance of working jointly to further reduce such emissions, including by helping Mexico to establish an ECA of its own.
In support of this effort, EPA, SEMARNAT, the Mexican Navy (SEMAR), Mexico's Secretary of Communications and Transportation (SCT), Transport Canada and Environment and Climate Change Canada worked together under the Commission for Environmental Cooperation on a project to address marine emissions in North America:

In the first phase of this project (2013-2014), Exitthe US, Mexico and Canada developed the needed analyses for Mexico’s possible ratification of MARPOL Annex VI and establishment of an ECA. The second phase (2015-2016) Exit focused on facilitating the development of a strategy for the establishment and implementation of an ECA in Mexico.  In the third phase (2017-2018), ExitMexico, with help from the U.S. and Canada, finalized its ECA proposal and began to put mechanisms in place for the implementation of the strategy.  One key step taken by the President of Mexico in 2017 was to transfer formal responsibility for the implementation and enforcement of MARPOL Annex VI from Mexico’s Ministry of Communications and Transportation to the Mexican Navy.​

Emission Control Areas, or ECAs, set strict international standards which require that ships reduce emissions. A North American ECA was adopted and began in August 2012, and the U.S. Caribbean Sea ECA took effect more recently. Sulfur/Particulate Matter (PM)-specific ECAs are also in place for the North Sea and the Baltic Sea; as of 2021, these ECAs also will control NOx emissions to the same degree as in the North American and U.S. Caribbean Sea ECAs.

What are the requirements of the North American ECA?

Within the North American ECA, ships must meet the required sulfur emission limit (often by switching to lower-sulfur marine fuels) when operating within up to 200 nautical miles of the majority of U.S and Canadian Atlantic and Pacific coastal waters, French territories off the Canadian Atlantic coast, the U.S. Gulf Coast, and the main, populated islands of Hawaii.

The North American ECA also requires the reduction of nitrogen oxides from new ships as of 2016.

Why are we implementing an ECA for North America?

The international standards will bring important benefits for human health through reducing emissions from ships.

Sulfur dioxides emissions from the combustion of high sulfur fuel are converted to sulfate particles in the air. These particles are a significant component of PM2.5, which can trigger asthma and worsen heart and lung disease, and are a significant threat to marine and terrestrial ecosystems.
Nitrogen dioxide emissions are a component of ground-level ozone, which forms smog.

Other EPA Work on Ship Emissions

The project engaged the maritime shipping industry and government representatives from Mexico, to raise awareness about the environmental benefits of implementing an Emission Control Area (ECA) and the North American ECA. The demonstration program helped ports and maritime carriers gain experience in using low sulfur fuel, in accordance with the strict new international standards.
The results were presented at a technical workshop held in April 2010 to raise Mexican government and industry awareness of the benefits of fuel switching.
An outreach video on the project was produced to raise public awareness. It played at an outreach kiosk at the Veracruz Aquarium (link to Veracruz Aquarium web site), which receives millions of visitors a year.

The demonstration consisted of the following activities:

EPA and SEMARNAT jointly hosted a technical workshop with local and federal Mexican agencies and stakeholders to discuss the fuel switch demonstration.

An important early effort of the EPA-SEMARNAT collaboration on ship emissions was to raise the awareness of the Mexican public and key Mexican government agencies about the benefits of reducing these emissions through MARPOL Annex VI. Most recently the US, Mexico and Canada are working together through the Commission for Environmental Cooperation (CEC) to develop a Mexican ECA designation proposal to the IMO. The following activities have been undertaken:

May 2018: SEMARNAT, joined by partners from multiple other Mexican ministries, the CEC Secretariat and EPA, determined that substantive work on the ECA designation proposal was complete, considered timelines for submitting the proposal to the IMO for review and approval, and requested the Mexican Foreign Affairs Ministry to formally submit the proposal to the IMO.

April 2017:  The CEC Maritime Shipping Project held a workshop hosted by the Mexican Navy in Mexico City, April 25-27, 2017 to review and finalize a draft Mexico ECA implementation strategy. The workshop was attended by all affected Mexican government agencies, the Mexican maritime industry, US and Canadian government officials and the CEC Secretariat.  The discussions resulted in broad support for the critical path to implementation, including accession, submission of ECA designation proposal and approval/adoption by IMO.

May 2016: The CEC held a kick-off meeting for the Phase II Project on Reducing Emissions from Goods Movement via Maritime Transportation and the Project on Enhancing North American Enforcement of the IMO Maritime Fuel Sulfur Limits in North America in Mexico City.  The meeting was attended by Mexican government ministries (including SEMARNAT, PEMEX, the Secretariat of Communications and Transportation, the Navy, the Ministry of Economy), the US EPA, and Environment Canada.

June 2015:  The CEC completed Phase I of the Reducing Emissions from Goods Movement via Maritime Transportation in North America project. This project developed the technical tools and analyses needed to assist Mexico in establishing an ECA, including a draft ECA designation proposal to the IMO.

May 2015: EPA published the results of the first Mexican ship emissions inventory, which was used as the basis of technical analyses by the CEC.

April 2010: EPA and SEMARNAT conducted a technical workshop on the outcomes of the fuel switching demonstrations to further government and industry awareness of the benefits of fuel switching and ECAs. Explore report, news, articles and presentations from the technical workshop by searching "Materials from April 2010 Mexico Workshop on Reducing Air Pollution from Ships" in the EPA Web Archive.

On September 26, 2012, a ship technology seminar was held to provide Mexican stakeholders with information about some of the ship technologies needed to meet the requirements of MARPOL Annex VI and an ECA. 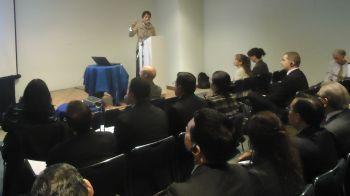 Morning session presentation by representative from Mexico’s health ministry.
The seminar was jointly sponsored by EPA, the U.S. Department of Commerce, and the Manufacturers of Emission Controls Association to increase the capacity of foreign entities to address environmental concerns while fostering export opportunities for the U.S. environmental industry. The seminar helped to raise the awareness of public and private stakeholders about the benefits of an ECA, including learning more about the technologies required to reduce pollution from shipping.
A broad set of over 40 stakeholders attended the seminar, including key Mexican government agencies, industry representatives and technology representatives.
The morning session included discussion of:

Explore presentations, agenda and information from the seminar.

Presentations provided in order of the seminar agenda. 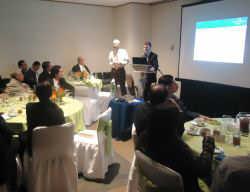 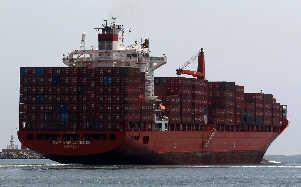 The Hamburg Sud demonstration vessel leaves Veracruz port on lower sulfur marine fuel.
To further Mexican government and industry awareness of the benefits of fuel switching and the ECA, EPA and the Mexican federal government conducted a technical workshop in April 2010 at the Port of Veracruz in Mexico.
Following on the demonstration, this workshop provided Mexican government and industry stakeholders and opportunity to learn first hand about this issue and to gather information on how to address marine emissions in the future. It was well attended by officials from local, municipal, state and federal agencies, including the State of Veracruz, SEMARNAT and PEMEX.
It also showcased a practice that will help the international shipping industry meet the new ECA regulations -- improving air quality and human health in coastal states.

Explore report, news articles and presentations from the technical workshop by searching "Materials from April 2010 Mexico Workshop on Reducing Air Pollution from Ships" in the EPA Web Archive.