Explore our work with Brazil: 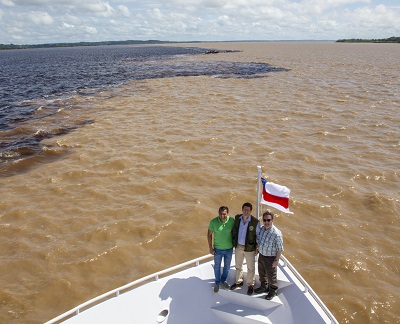 At the "Meeting of the Waters" in Manaus, Brazil, Administrator Wheeler, Minister of the Environment Ricardo Salles, and Amazonas State Governor Wilson Miranda Lima met to discuss shared environmental challenges including marine litter.January/February 2020: EPA Administrator Andrew Wheeler traveled to Brasilia and Manaus in Brazil to advance cooperation with Brazil’s Ministry of Environment and other stakeholders. Administrator Wheeler met with Brazil Minister of Environment Salles to discuss future collaboration, and signed an MOU to strengthen and coordinate efforts to effectively protect our nations’ environments.

EPA is working with Brazil’s National Water Agency (ANA) to build capacity on water quality management, in partnership with the US Geological Survey (USGS) under an interagency agreement on Brazil Water Quality.  The activities under the agreement include:

The Embassy Science Fellows Program, led by the U.S. Department of State, provides U.S. embassies access to the expertise of U.S. government officers in science and technology fields. EPA worked with the State Department to develop programs for two Embassy Science Fellows (ESF) working on assignments with the Brazilian Institute of Environment and Renewable Natural Resources (IBAMA).

As an outcome of the June 2015 meeting between then-President Obama and then-Brazilian President Dilma Rousseff, the EPA Administrator and Brazilian Minister of Environment launched a new work plan under the EPA-MMA Memorandum of Understanding (MOU) to protect the environment while promoting economic growth and social development. EPA and MMA began collaboration with policy dialogues and technical webinars on water quality topics. While this MOU expired in 2017, our collaboration with Brazil continues.

Follow Up to the Joint Initiative on Urban Sustainability (JIUS)

The Joint Initiative on Urban Sustainability (JIUS) was a public-private partnership supporting investment in sustainable urban infrastructure. It was established by President Obama and Brazil’s President Dilma Rousseff in 2011 and officially launched by former Administrator Lisa Jackson and then Brazilian Minister of Environment Izabella Teixeira.
The JIUS brought together government, community and industry leaders from the United States and Brazil to generate economic growth, create decent jobs, eradicate poverty and protect the environment by increasing investment in green infrastructure and city-scale green technology strategies. Initial partners included EPA, Brazil’s Ministry of Environment, the City of Philadelphia, the City of Rio de Janeiro, the State of Rio de Janeiro, the Rockefeller Foundation, and the Brazilian Foundation for Sustainable Development. The JIUS also engaged a broad group of private, academic, and not-for-profit organizations as collaborators.
JIUS partners developed the JIUS Project Portal, which was delivered at Rio+20 as the JIUS final product. The Portal identified policy options, financing mechanisms, and projects in Rio and Philadelphia that demonstrate integrated urban sustainability and the economic, environmental and social benefits of greener urban investments, with the hope that these innovative public private partnerships for green investments in urban sustainability could be replicated in other cities globally. Since Rio+20, JIUS partners have individually supported projects identified under the initiative.
EPA supported two projects identified under the JIUS – improving solid waste management in underserved communities in Rio and strengthening the governance structure and regulatory framework for the Guanabara Bay.  The long term goal of these efforts was to promote opportunities and partnerships for urban infrastructure development that achieve integrated economic, social, and environmental benefits – particularly for underserved communities.  These projects supported, and were consistent with, the goals of the Joint Action Plan to Eliminate Racial and Ethnic Discrimination and Promote Equality (JAPER).

Technical support to the ReciclAção project

In July 2013, EPA partnered with the City of Rio’s Pereira Passos Institute (IPP) to host a workshop to share approaches and tools for participatory solid waste management in underserved areas. This work led to technical support to the ReciclAção project, a public-private partnership to reduce environmental risk by collecting recyclable materials in the community and using the revenue from their sale to implement environmental improvements in the community and environmental education programs. Support included development of a 2015 interactive seminar for exchange between the ReciclAção recycling partnership and the North Philadelphia Village of Arts and Humanities (VAH).

In December 2013, former Maryland Governor Martin O’Malley and former Rio de Janeiro Governor Sergio Cabral launched a partnership to share best practices Exit for keeping the iconic bays in both states – the Guanabara in Rio and the Chesapeake in Maryland – clean, healthy and sustainable. EPA has helped facilitate and support this partnership, including a July 2013 study tour to exchange ideas for protecting the Chesapeake and Guanabara Bays. Exit

In July 2014, EPA and a delegation of officials and experts from Maryland traveled to Rio de Janeiro, Brazil, to participate in a Workshop on Governance Structures to Enhance the Restoration of Guanabara Bay. Exit The purpose of this workshop was to launch an outreach process with various local stakeholder groups and solicit their ideas on governance structures for Guanabara Bay.  The workshop used lessons learned from the Chesapeake Bay governance model to enrich the discussions.